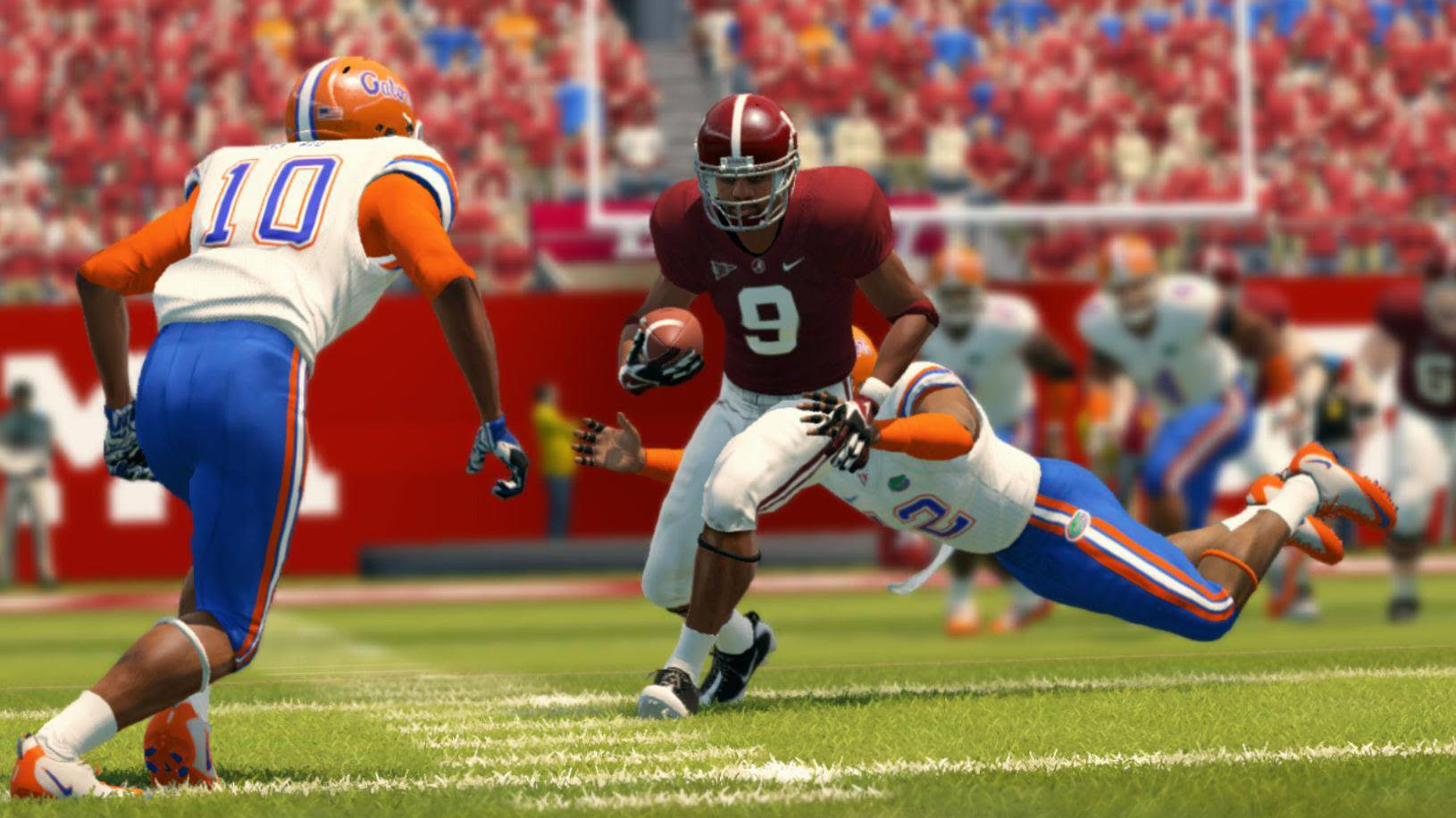 I’m not the first person to mourn the end of EA Sports’s NCAA Football series, but hopefully I’ll be one of the last. Nobody should have to endure another summer without this game dropping into July to save us from the real world. There’s nothing but baseball between here and September. We should all be passing this time running through the SEC with Leonard Fournette.

The dynasty mode alone made NCAA Football better than any other sports game. You could build a program from scratch and take over the world. You could recruit imaginary high schoolers, judge 40 times, and accidentally end up with 10 receivers. The actual gameplay was much better than Madden, plus it had every style of playbook, unlimited uniform combinations, and fight songs that implanted themselves in your head for weeks on end.

I’ve pretty much given up playing other video games. I never got into Halo, and all of those Black Ops Kill Everyone games are a little too intense for me. NBA2K can be fun, but basketball games probably peaked at NBA Street. FIFA will always be great, but it’s not the same — you don’t lose weeks of your life playing FIFA. I need NCAA Football. I need to be running a program, recruiting year-round, and spending several hours outfitting incoming recruits with single-digit jersey numbers and custom sweatband combinations.

There were a lot of things I enjoyed about my time in college, but if I had to choose one memory that captures how great life was as a 20-year-old, it starts with NCAA Football. My friends and I played constantly. One September afternoon, my roommate came up with the idea of starting a dynasty with four of us who lived together.

At first this seemed like too much work. We’d all have to coordinate to make sure everybody played the computer each week, we’d have to recruit simultaneously, we’d have to schedule times to play head-to-head, and … that was it, actually. But still, that kind of responsibility and accountability is a lot to handle for a college kid. Eventually, reluctantly, we agreed to try it.

And that shit got vicious.

Do you know what’s better than playing your best friends once or twice a season? Recruiting against them every single week, and slowly becoming so invested in the five-star receiver you’re all fighting over that the actual head-to-head game feels like the Super Bowl. Prorate that out a few years. By then, you’ve been recruiting against your best friends for several seasons, and now two of you have built undefeated programs.

My one friend was the University of Florida, I was LSU, and it was all getting settled under the lights, on a Tuesday night, in the common room. This is a game I remember specifically because I won on the final play, and my roommate walked out of the room and stopped speaking to me for several days. Another roommate broke at least six or seven controllers over the course of that year.

Justise Winslow knows how that goes.

Will Justise Winslow smash a video-game controller for falling all the way to No. 10? http://t.co/NlrKPGywWt pic.twitter.com/Pg3N5ygjUh

Now it’s 2015, and there’s no way to relive those glory days. There’s an imaginary wide receiver recruit out there floating in the ether, and nobody can change his number from 86 to 7. Nobody’s giving that four-star linebacker with 4.5 speed a dope multicolor visor. Nobody’s carefully renaming each of their offensive line recruits after various cities on the NASCAR circuit. Why are we even alive?

Everyone knows how we got here. EA Sports was profiting off players’ likenesses — the anonymous college players in the game all had the exact attributes of real athletes — when UCLA’s Ed O’Bannon headlined a class-action lawsuit against the NCAA in pursuit of compensation. As the litigation became more serious along the way, it prompted the NCAA to end its relationship with EA Sports, and conferences pulled out in fear of being held liable themselves. But that’s over now.

Just last week, a judge officially approved a $60 million settlement in the O’Bannon lawsuit. Among active players who were party to the suit, payouts will be anywhere from $74 to $6,700, depending on how frequently they show up in the game. Fantastic.

Now it’s time to bring back the game.

Summers are too miserable without it. There are dynasties that need to be built and hours that need to be wasted stealing recruits from Nick Saban. Come fall, there are classes that need to be skipped in order to play a huge head-to-head against a roommate, at home, with three five-stars visiting. Think of all the controllers that aren’t being smashed in dorm rooms across America. We need this.

All is not lost. For one thing, now that the threat of a lawsuit is gone, EA Sports could make a deal with the NCAA and individual conferences to bring back a game with randomized rosters. In this case, the lords of the deep web1 would swoop in to provide full rosters that could easily be uploaded to keep the game current.

But the better long-term solution might be to broker a deal with individual conferences to license their teams and players. With all the money floating around college sports — along with the constant threat of litigation — it’s eventually going to make sense for conferences to negotiate and pay royalties to players as a group. Video-game royalties would be a great low-risk place to start.

For college athletes in major conferences, it would basically be another per diem, with money along the lines of the O’Bannon settlement, but closer to the $74 side of the spectrum for most of them. It would be a small concession from schools and administrators — in exchange for money of their own, along with endless free marketing — and a step in the right direction for players. If anything, small royalties here could provide a blueprint for bigger payments from everything else.

There are plenty of others onboard with the movement, and that’s really the best reason for hope. As long as there’s money to be made from the people who still dream about this game years later, there’s incentive for everyone to make this happen.

EA Sports could update the graphics, and rosters, and playbooks, and add the college playoff, and it would all be great. The producers will probably never add crime and bag men to the game, but there’s still plenty of room to add a “discipline” element to dynasty mode to account for Florida State. Anything is possible. Every day I’m not running the option with Cardale Jones and Ezekiel Elliott makes this a little more desperate.

Make it happen, EA Sports. Talk to the conferences, make a deal with the players. Do whatever it takes. This is so stupid, but so, so serious.

We need NCAA Football back.