Let’s Get Messy: In Praise of Big Ten Football 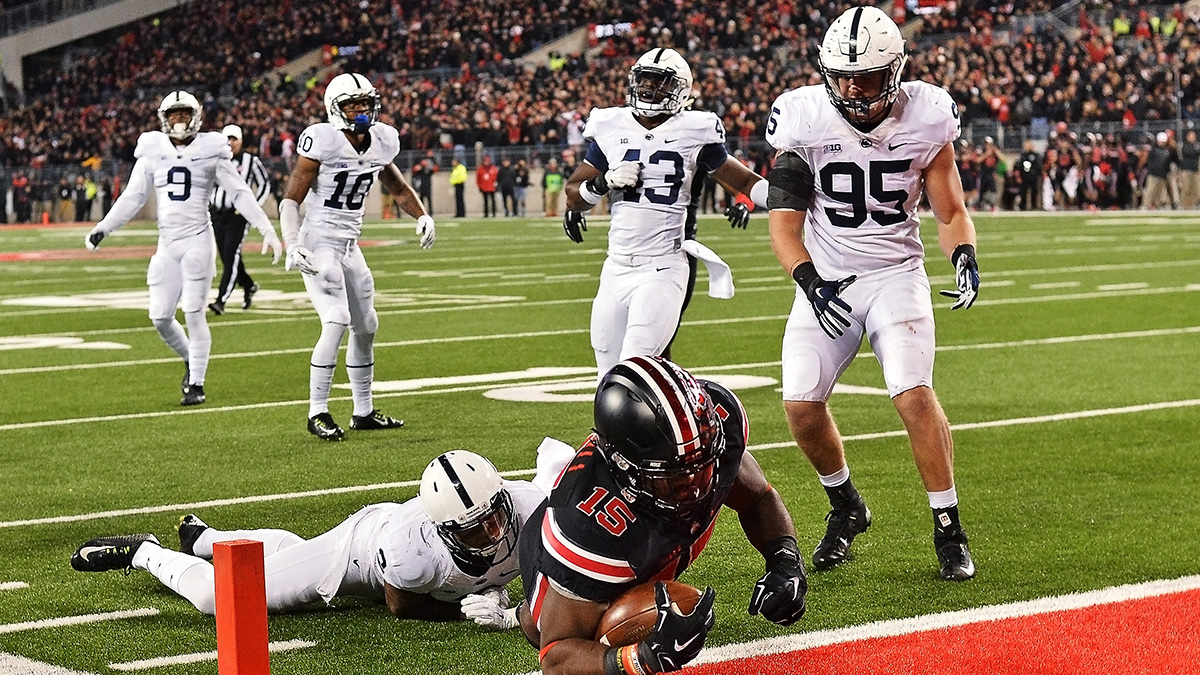 So here’s a secondary college football headline you might have glossed over last Saturday: In the hours before an Australian punter executed a flawless inadvertent lateral to an onrushing defender in Ann Arbor, Rutgers came back from a 25-point deficit to defeat Indiana, 55-52. That’s the same Rutgers team whose head coach was returning from a three-game suspension for violating university policy by contacting a faculty member regarding a player’s grades; that’s the same Rutgers team whose best player got suspended early in the season after a postgame altercation that involved, according to NJ.com, “his girlfriend, his mother, a woman he had a romantic relationship with and others.”

You want to know the best part of this other absurd Big Ten finish, the one nobody noticed while they were busy gawking at Michigan’s historic collapse? Like Michigan State, Rutgers did it the impossibly hard way, too. After tying the game at 52 on a touchdown, the Scarlet Knights had their extra point blocked, thereby forcing themselves to convert a game-winning field goal in the final seconds to pull off what I guess would be considered an upset. But given the sheer oddity of the Big Ten this season, I’m not sure if the term “upset” even applies anymore. For years, this was a plodding conference largely devoid of compelling offense (outside of Columbus) and first-rate defense (outside of East Lansing). And now? Now I have no idea what the hell the Big Ten is, except a mélange of inscrutable narratives and improbable results, full of programs both resurgent and regressive, along with others that fit into no real category at this point. It is a fascinating and messy scrum, and it is undeniably glorious.

Is the Big Ten the most exciting conference in the country? Hell no. By any measure — except in the category of defending national champions — it is not. The Big Ten is the only major conference whose teams are not averaging 30 points per game this season; the highest-scoring team is an underachieving Ohio State squad, which is tied for 24th in the country with 37 points per game. (Only one team, Indiana, is in the top 20 in yards per play.) Yet despite all of that, it’s hard to remember the last time the Big Ten was in such a good position, because the conference is far more interesting from top to bottom than it’s been in a long time.

There’s the trending threesome of Ohio State, Michigan State, and Michigan, an intense rivalry cycle for which Jim Harbaugh has already become the catalyst we all thought he’d become (and which could get even messier). There’s also the fully collapsible Northwestern Wildcats, who beat Stanford in their season opener and appeared to be on their way to major-bowl consideration before losing two straight games by a combined score of 78-10; there’s Minnesota, which appeared to be on the upswing and is now beset by mediocrity and potential scandal; there are the open-ended scenarios at Illinois (which fired its coach for malfeasance one week before the season began) and Maryland (which fired its coach for incompetence after dragging the whole thing out over the course of a weekend); and there’s the ongoing crisis of mediocrity at the old-guard locales of Penn State and Nebraska.

Already this year, Ohio State, the best team in the conference (and, theoretically, the best team in the country), has nearly blown a game to a Mid-American Conference school at home; already this year, Big Ten teams have lost on Hail Marys and succumbed to massive comebacks. And somehow, through all this, an Iowa program that was left for dead around the time Kirk Ferentz finagled his way into a huge pay raise has managed to remain undefeated.

There may be no team more representative of the volatility of Big Ten football than Iowa. Five years ago, on the heels of an 11-2 season, Ferentz, the Iowa coach, signed a bloated contract with a massive buyout, and since then, the Hawkeyes have been on a steadily uninteresting trajectory, never winning more than eight games. Ferentz is essentially a tenured professor, locked in for a decade, coasting past the age of 60 in a job that he probably won’t relinquish until he’s ready to retire. But now Iowa is 7-0, and every one of the Hawkeyes’ remaining games is winnable, and it’s possible that Iowa will emerge 12-0 from the largely toothless Big Ten West division and wind up in the conference championship game against either Michigan State (which has struggled to beat inferior teams all year long) or Ohio State (see previous parenthetical).1

The beauty of the Big Ten is that it has never given in to aesthetically beautiful football. The Big Ten is Bo Schembechler and Woody Hayes; the Big Ten is frigid weather and overachieving linebackers and 3 yards and a cloud of dust. It was never going to become the Big 12. It was never going to give in to the fast-paced modernity of the spread offense, which meant that in this accelerated age of college football, the conference found itself mired in an identity crisis. The high school recruiting base in Big Ten states (with the exception of Ohio) is dwindling in numbers; over the past several years, the homegrown defensive talent that once gave the Big Ten its edge has struggled to adjust to the speed of the game.2

But this year, six Big Ten teams are ranked in the top 20 (and two in the top three) in scoring defense. In large part, the Big Ten has stared down the future of football and said, Fuck it, we’re going to do it our way. And that way is messy and imperfect, and that way leads to jaw-dropping finishes centered around botched punts, because what better signature play is there for a conference predicated on conservatism than to have football’s most conservative play dangled by its heels and shaken loose of all its change?

Michigan–Michigan State was the sort of shocking end only a Big Ten game could deliver. For a long time, this conference and its blatant money-grab expansion choices and its refusal to modernize nearly drove me crazy. But not anymore. Now the Big Ten is full of crazy and weird and unpredictable energy. It is all Harbaughed up, and I’m totally cool with that, because after last weekend, it sure as hell isn’t boring anymore.