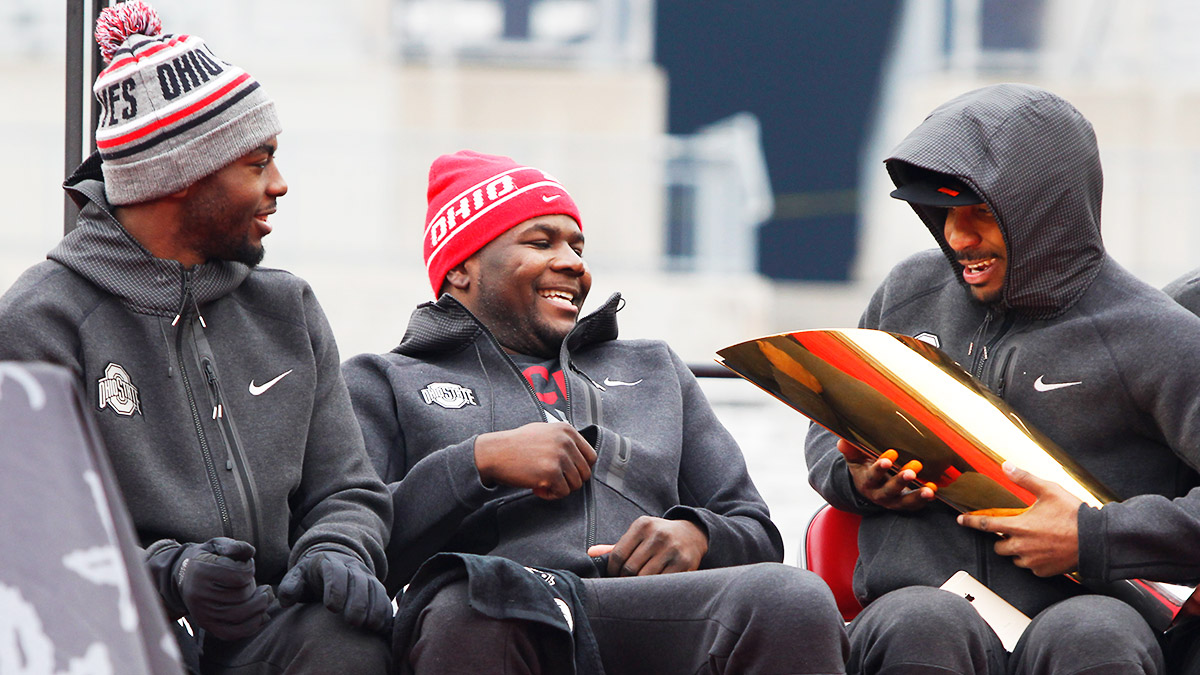 Typically, plotting the course of an ongoing quarterback duel at this time of year amounts to falling back on a handful of stock characters — the Pocket Passer, the Scrambler, etc. — and in a different context, the battle atop Ohio State’s depth chart might fit snugly within the usual template. After all, there’s nothing particularly novel about a competition that pits the statuesque slinger with an NFL-ready arm (in this case, Cardale Jones) against the dynamic athlete (Braxton Miller), or about the possibility that both could ultimately be one-upped by the steady technician (J.T. Barrett) whose skills run the gamut. Some version of that narrative is unfolding at dozens of schools as we speak, a rite of spring as reliable as taxes and inscrutable think pieces about Mad Men.

In reality, of course, equating the Buckeyes’ embarrassment of riches behind center with the guesswork that accompanies most QB duels is insane. Elsewhere, the generic labels are useful shorthand for introducing anonymous noobs who would otherwise be complete ciphers, and occasionally for making sense of how a particular player might fit into a given scheme. In Columbus, where two of the aspiring starters have already worn the label of Big Ten Player of the Year and the third has captained the team to an improbable national title, the broad categories are useless. In this battle, every option makes sense — so much sense that the prospect of eventually consigning two of these passers to the on-deck circle is a foolproof recipe for sleepless nights.

“Everything is positive: Talent, quality of people, value to the program, investment in the program, check, check, check, check,” Urban Meyer told reporters last month, assessing the quarterback situation roughly halfway through OSU’s spring session. “Negative? Two people are going to have to watch. It’s not like receiver where you can put three of them out there. That’s starting to eat away at me a little bit.”

Yes, that sound you hear is the collective hum of Meyer’s colleagues playing the world’s saddest song on the world’s smallest violin. Despite the first-world nature of this particular problem, though, the fact remains that conditions on the ground this spring haven’t made Meyer’s dilemma any easier to resolve: Two of the aspiring contenders have been stuck watching, with Miller limited by the lingering shoulder injury that sidelined him in 2014,1 and Barrett continuing to rehab the broken ankle he suffered in the regular-season finale against Michigan. That’s left the vast majority of snaps to Jones, the third-stringer turned playoff hero who has picked up right where he left off after taking the reins from Barrett last winter. The only other scholarship quarterback going full-speed this spring is redshirt freshman Stephen Collier, who (for now) remains an afterthought until his elders run out of eligibility.2

As a result, Jones — the greenest of the three challengers by far, with his only three career starts coming in the postseason surge against Wisconsin, Alabama, and Oregon — currently has the advantage of presiding as the unchallenged incumbent, and presumably of carrying that distinction into preseason camp. If that’s the case — even if only on an unacknowledged, subliminal level — then it’s possible Miller, owner of a 22-2 record as a starter in 2012 and 2013, and Barrett, who won 11 of 12 starts last year, may find that neither a sterling résumé nor clean bill of health will be enough to disrupt the new status quo.

“[Jones] became a very functional player with repetition,” Meyer said at the start of spring drills. “He was not … you know, last spring he had a decent spring with reps, and then in the fall he was OK. But then when he took over for the Alabama game, he had a lot of reps getting ready and played very well. When he had a month, because he had a month to get ready for that thing, and then he had a week to get ready for the championship game and he played very well. He’s still more raw. He’s still almost a rookie, an older rookie that hasn’t had a lot of reps. I wanna see him get a million reps this spring.”

A million reps may be a slight exaggeration,3 but the fact that the real competition is on hold until August has other consequences. For one thing, no decisive winner in the spring means no loser, either, which dramatically reduces the likelihood that the odd man (or men) out will opt to transfer to greener pastures before the season. That may not matter much to Jones, who’s likely bound for the NFL in 2016 regardless of what happens in 2015, or to Barrett, who has three years of eligibility remaining and stands to have the job to himself anyway when Miller and Jones move on. But for Miller, who has already earned his bachelor’s degree, and with it the freedom to spend his final year of eligibility anywhere in the country without penalty,4 the uncertainty carries a real risk: If he doesn’t reclaim his old position in the fall, it will be too late to find a more accommodating depth chart.

When the question of a looming 2015 controversy first bubbled to the surface last September, just as Barrett was beginning to emerge in Miller’s stead, Meyer dismissed the notion of a competition and assured reporters in no uncertain terms that “Braxton is our quarterback.” That wasn’t just good politics: At the time, it was common sense. Now, barely six months later, the same feeling of inertia that seemed to ensure Miller’s place then seems just as likely to leave him in limbo come fall. Is it really possible that one of the most decorated players in Ohio State history might end his college career — and conceivably his football career, period — trying to break into the rotation at safety, or worse, carrying a clipboard?

“At some point there will be some [stress] because of the respect I have for those three guys,” Meyer said last month. “There’s no stress at all as far as the functionality of the position. It’s the personalities, families, people involved. If I disliked one or two of them, it would not be that hard. But I have a lot of respect for those guys, and everyone around here has seen what they’ve done. So that’s the only dilemma that I can see happening. But it’s not right now, because we’re not even focused on that. I want to see Five [Miller] get healthy, and J.T. get healthy, and Cardale continue to improve.”

Whenever the decision comes, and whatever it happens to be, it will have no effect on Ohio State’s standing as the runaway favorite to repeat as national champion next January; on the contrary, the assumption that the Buckeyes’ backup quarterback, whoever he is, would contend for the Heisman on any other roster in America will only add to their aura of invincibility. And as problems go, deciding between too many viable quarterbacks certainly beats the alternatives. In the meantime, though, the process of actually arriving at a decision isn’t nearly as enviable as it looks.

When 'Win Now' Doesn't Work: What's Next for Manchester City?