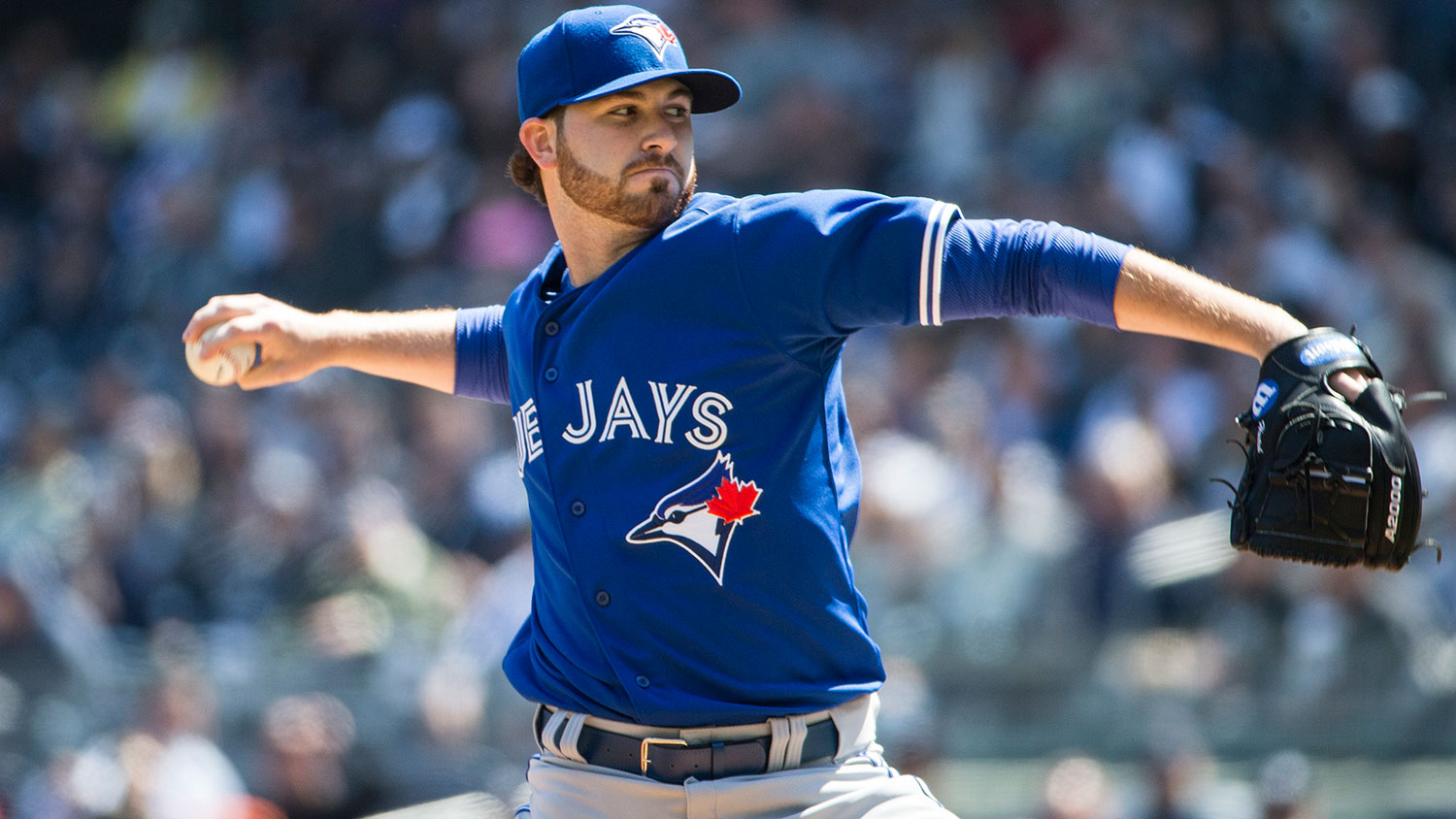 Wondering how good the Blue Jays could be this year? Well, you didn’t have to wait very long for an answer, as Monday’s opener gave us a clear look at the team’s best-case scenario. Solid pitching from a young starter, impressive defense, and a punishingly deep batting order propelled Toronto to a thorough 6-1 road victory over the New York Yankees.

While it’s foolish to project anything based on a single game, Opening Day showed just what the club is capable of. Ninety more performances like this and that 22-year playoff drought could finally come to an end.

The good tidings began with Drew Hutchison, who produced one of the best outings of his career. The 24-year-old right-hander went six innings, allowing just one run on three hits and striking out three batters and walking two. He fired first-pitch strikes in 14 out of 23 at-bats, with 57 of his 93 pitches going for strikes, including 35 of 50 fastballs.

Last year, Hutchison struggled mightily with runners on base, allowing opposing batters to hit .282/.335/.484 in those spots, compared with just .222/.288/.373 with the bases empty. That split was likely a fluke, and his strikeout-per-inning results bode well for a breakout season. Against New York, Hutchison didn’t face too many jams, but he fared well on the rare occasions when the Yankees threatened. Alex Rodriguez led off the bottom of the third with a walk, and Hutchison responded by inducing a Stephen Drew fly-out, a Didi Gregorious pop-out, and a Jacoby Ellsbury groundout. In the fourth, he allowed a two-out walk to Mark Teixeira and a single by Brian McCann, only to stifle a would-be rally by retiring Chase Headley on a groundout to second.

Hutchison also benefited from some fortuitous results on balls in play, with just three out of 18 falling in for hits. While results that extreme won’t last, there’s reason to believe that Toronto’s starters will get good defensive support this year. In offseason acquisitions Josh Donaldson and Russell Martin, the Jays added elite defenders at two premium positions, which should be a boon for a team that finished ninth in the American League in Defensive Runs Saved last season, per Baseball Info Solutions. In particular, Martin could provide a huge lift as an excellent pitch-framer and also a guy who gets high marks within the game for less tangible skills, like pitch calling and just generally being able to keep his pitchers calm and focused.

On Monday, though, the flashiest defensive play came from Jose Bautista, the veteran right fielder known more for his big bat but who’s also a decent gloveman capable of occasional spectacular catches.

Bautista’s season debut at the plate was an 0-for-5, three-strikeout ugly-fest, but the Jays tallied six runs anyway. They were led by Edwin Encarnacion, who blasted a two-run shot in the third to cap a five-run outburst. While Toronto had the fifth-best offense in baseball last season on a park-adjusted basis, the offseason additions give the Jays what might be the best top five of any lineup in the majors: Jose Reyes, Martin, Bautista, Encarnacion, and Donaldson.

Yet, despite the reinforced defense and the intimidating offense, what will likely make or break Toronto’s season is its stable of young players: Seven guys on the 25-man roster are 24 years old or younger.

In addition to Hutchison, the rotation includes two other youngsters. In his debut season in 2014, 22-year-old Aaron Sanchez impressed, but all 24 of his appearances came in relief, and he’s now being called upon to start after the knee injury to Marcus Stroman last month. In his final spring training appearance, the right-hander allowed five runs and six walks in 4.1 innings, but his minor league track record1 and highly regarded stuff provide reasons for optimism. The third inexperienced arm is 21-year-old lefty Daniel Norris, who impressed in the Grapefruit League this spring, punching out 29 batters and allowing just 21 hits and five walks over 24.2 spring innings. That comes on the heels of a 2.53 ERA and 163-to-43 strikeout-to-walk ratio across three levels in the minors last season. If Sanchez and Norris can deliver 60-plus starts with roughly league-average results, look for Toronto to be in contention come September.

Behind the mound, a pair of kids grabbed starting jobs, with 22-year-old Dalton Pompey in center and 24-year-old Devon Travis at second base. Over the winter, Toronto acquired Travis from the Detroit Tigers in exchange for Anthony Gose — a move that both opened the door for Pompey in center and may have secured the franchise a viable starting second baseman for the next six years. A squat hitter at 5-foot-9, 190 pounds, Travis put up big numbers in the minors, batting .323/.388/.487 in 257 games. He’s a potentially huge offensive upgrade over banjo-hitting predecessors Munenori Kawasaki and Ryan Goins, and he didn’t hurt anyone’s opinion of him with his first major league hit.

Then there’s Pompey, who, thanks to his speed and on-base potential, was rated the 30th-best prospect in the game by Baseball America heading into this season. The hometown kid — from Mississauga, Ontario, a short drive from downtown Toronto — hit a solid .276/.367/.415 in 319 minor league games over the past five years and then impressed in Florida with a .327/.364/.519 line this spring.

However, the youngest newbies are the two 20-year-old relievers. Roberto Osuna is a Mexican right-hander with just 22 innings at high-Single-A ball who might’ve started the season in the Florida State League … if he hadn’t miraculously leap-frogged two levels and forced his way up to the majors with an impressive spring that included 14 strikeouts and a 2.19 ERA in 12.1 innings. Somehow, Dominican righty Miguel Castro brought even less experience into spring camp (8.1 innings in Single-A Dunedin last season), but the Jays are giddy about both pitchers: Each one wields a 100 mph fastball that could play in The Show immediately, lack of experience be damned.

By pushing Osuna and Castro this quickly and by entrusting major roles to five other kids, the Jays are favoring skill above all else. It’s a brave approach, but if Game 1 turns out to be the rule rather than the exception, we might have a reason to play a bunch of Joe Carter clips come October.

Was It Worth It? What Will Have to Happen for These NBA Teams to Consider Their Seasons Successful