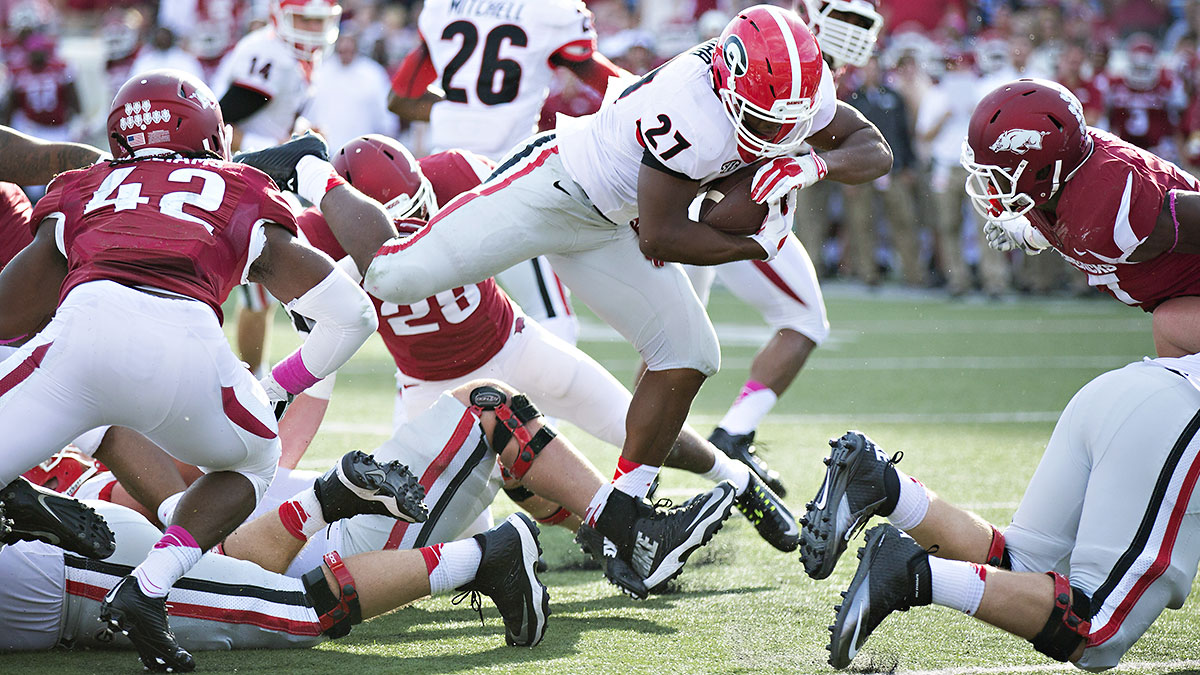 Celestial Recalibration of the Week: No Lucky Stars

And then there were five, and then there were four: Florida State, Mississippi State, Ole Miss, and Marshall are the only remaining undefeated FBS programs through eight weeks of play, with at least one more of those guaranteed to drop from the national front-runners following the November 29 Egg Bowl. Nobody looks infallible, and that’s just swell, because if every team sustains a loss between now and early December, the entire playoff mainframe will reset and we’ll get to replay all of our summer supremacy arguments, only this time with data instead of guesswork. There’s a whole mesopelagic zone of one-loss teams teeming just below your line of sight. Can’t hardly wait.

Notable among those one-loss squads: the defending Coastal champion (STILL FUN TO TYPE) Duke Blue Devils, bowl-eligible for the third season in a row — this time after just seven games — and outright endangering our beloved fantasy of a seven-way 4-4 ACC Coastal Division race tie.

Will #Duke run away with the Coastal? Or is Operation All Teams 4-4 back on track? @HollyAnderson pic.twitter.com/pNav5iLbfI

It just figures that this team would be the one gleefully threatening to ruin the curve for everybody else once it had the capacity to do so, doesn’t it? Buncha cake-eaters, we tell you what.

Let’s tackle that last one first: There are players in this game who possess a quality often called “talent you can’t teach.” Then there are players whose talent is so great that it’s actually infectious, leaching into the marrow of those around them, even those whose NCAA eligibility expired around the time “My Sharona” topped the charts:

Moving on: Gronkowski Labs, LLC has graced the American viewing public with its latest specimen, this one a sophomore fullback for Kansas State. Glenn-Gronk has nine career catches, four of which have resulted in touchdowns. Here’s his latest:

Finally, we find ourselves talking about Gurley again, because this week he’s making headlines with his absence: Sidelined by some rank NCAA bullshit, Gurley once again gave way to true freshman Nick Chubb, who followed up last week’s 38-carry, 143-yard outing at Missouri with a 30-carry, 202-yard, two-score performance at Arkansas. The #FREEGURLEY movement has never been more strident than in this moment, if only because Chubb must be awfully tired after all that and could probably use a buddy with whom to split carries.

Understand first that we are not really the kind of people who go around name-dropping years-old stories off NPR shows with this expectant look that you, too, should be equally familiar, but there’s a “This American Life” episode that has stayed with us for ages and is relevant here. It’s called “Fiasco,” and it begins with a story of a community theater production of Peter Pan that is introduced thus: “This isn’t a story of a mediocre play. It isn’t even the story of a play.”

Wild stat: Last 10 years, CFB teams that held opponents to 120 yards or less are 147-2. Both losses belong to a Will Muschamp Florida team.

We were all set to draw our parallels from here until we went hunting for the archived episode and remembered what the second segment was that day: “A medieval village, a 1,900-pound brass kettle, marauding Visigoths, and a plan to drench invaders with boiling oil that goes awry.” Better.

Graven Idol of the Week: The Littlest Burning Couch in Morgantown

You tried. You tried to do a thing. That’s not a value judgment on the thing you tried to do, especially on the outcome of that thing, and for that we should probably all be grateful. Your work has touched us, if only in the sense that it made our own fingers brush our uvulas. Please accept this sticker as a token of recognition for your efforts.

With apologies to Nick Montana, there’s a team standing head and shoulders above the masses flailing toward adequacy, and that group was officiating Saturday’s Baylor–West Virginia game.

Refs asked #WVU fans to stop throwing objects on the field. THE FANS ASK REFS TO STOP THROWING ITEMS ON THE FIELD!

“Rules are rules,” some of you are burbling right now, with the sense of having said something deeply profound. And without engaging with those of you hall monitor types who take inexplicably perverse pleasure in seeing teams marched back five to 15 yards, we can all agree that this was perhaps an emotional mismatch of crew to situation, yes? Baylor gained 318 yards of offense in Morgantown; West Virginia 456, and the referees portioned out 3531 yards’ worth of penalties. And while many of the flag throws were admirably balletic, we were told we’d be watching a football game, not rhythmic damn gymnastics.

NHL Weekend: All Is Rusty in Edmonton