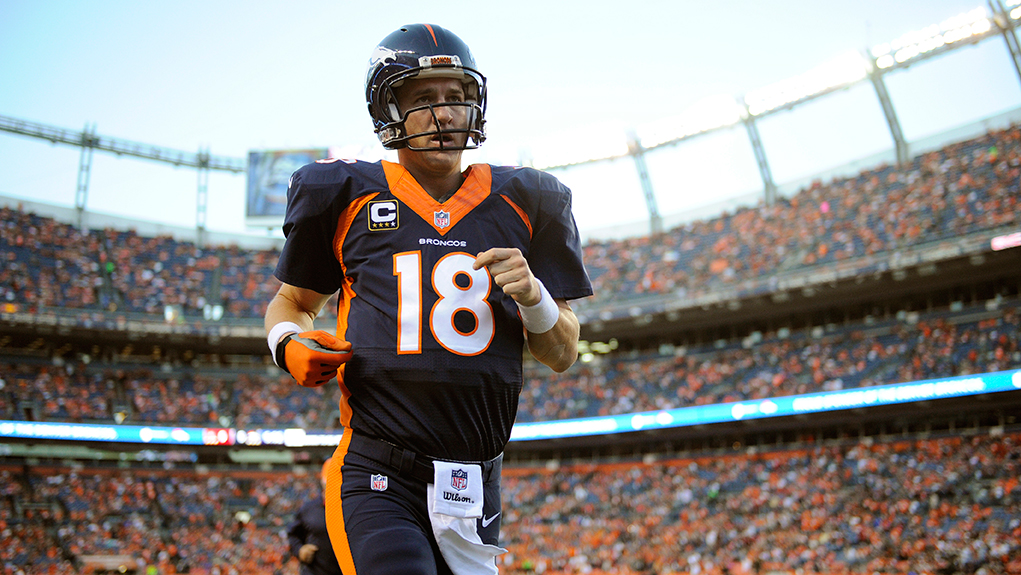 Peyton Manning wanted this thing over quickly. He went 5-of-5 on Denver’s first drive en route to touchdown no. 507, and it never really slowed down from there. It’s fitting that on the day he broke the career passing touchdown record, arguably the greatest quarterback ever played arguably the greatest game any quarterback could play. Manning was basically perfect last night, and as a team, the Broncos put together easily their best win of the year.

The 49ers can be had through the air when facing the wrong team, but they came into the week third in defensive DVOA and third against the pass. And Manning still made them look like Kentucky back in 1997. After last year, it doesn’t feel like there’s much use in extolling the Broncos offense — not after we’ve seen them roll through most of a season before being run over at the end of it. But as a unit, they’re playing about as well as they did during their historic 2013-14. Combine that with an improved defense, featuring some valuable new pieces and led by a revived Von Miller, and you get the most frightening team in football.

St. Louis played like a desperate team yesterday, and at 1-4, it was one. Grasping for something, anything, in the running game, the Rams turned to rookie Tre Mason, who averaged 4.7 yards per carry against what had been the league’s best run defense. Already up 14-3, the Rams tried to put the game away with the coolest trick play there is.

As Tavon Austin acted like he was catching a punt near one sideline, Stedman Bailey caught it all the way across the field and took it 90 yards for a touchdown. The Bears wasted a similar play three years ago by having a touchdown in a loss called back by penalty, and the lesson is the same now as it was then: Punt teams apparently have no idea where the ball is going.

The trickery helped, but there were also plenty of plays on which the Rams just lined up and beat Seattle. Rookie Aaron Donald had his way with left guard James Carpenter and put together the best game of his short career: three tackles for loss, a sack, and two more quarterback hits. In a season when there hasn’t been much to get excited about in St. Louis, that kind of day was good to see.

It was an interesting week for Golden Tate. When he hit free agency in March, Tate called Seattle’s final offer “laughable” before signing with the Lions. There was clearly a gap between the player Seattle thought he was and the player Tate figured he could be elsewhere. This year, it has looked like Tate was right. And as his name was getting thrown around in the inevitable leaks about Percy Harvin’s time in Seattle, Tate responded how someone playing at a Pro Bowl level probably should: 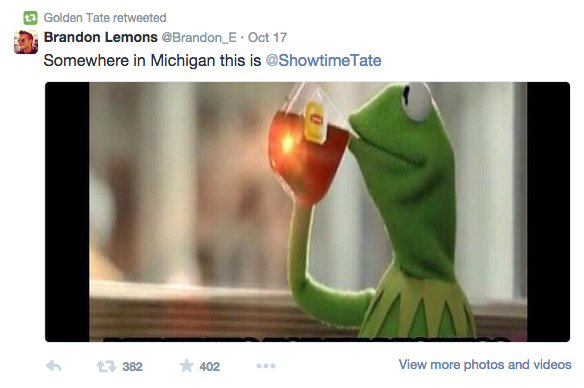 Tate followed that with the best game of his career: 10 catches for 154 yards and a score — a 73-yard catch-and-run — that swung the game for the Lions and kept them atop the NFC North.

The catch was a perfect encapsulation of the player Tate has been his entire career. Few players in the league have surer hands, and last year, no receiver was tougher to bring down after the catch. Tate always had the potential to emerge in an offense with more volume. So far, he’s made the most of it.

I support all on-field audio for this exact reason. In most pass protection schemes, the offensive line is responsible for the four down lineman and the “Mike” linebacker. That’s why the quarterback is always pointing and yelling out a jersey number. Yesterday, Jameel McClain apparently disagreed. I’m not sure if he was trying to trick Tony Romo or help him out, but either way, I want more of this. Linebackers shouldn’t have to sit there and take that kind of berating. And pointing is rude. 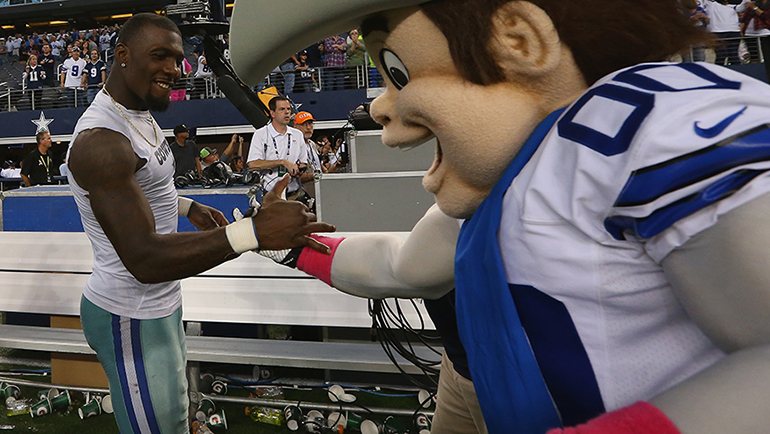 Even if he was wrong about McClain, Romo was right about everything else Sunday. The Cowboys offense just kept on rolling, going 9 of 14 on third down. They’re now converting 57.4 percent of third downs this season, which is absurd. No team in the league finished better than 49 percent last year.

It’s starting to feel like the effect is cumulative. The Cowboys expect to stay on the field, and they do. They have the best running game in the league, and Romo is completing a higher percentage of his passes than anyone in football. Defenses are so exhausted from having to chase DeMarco Murray around that by the time Romo’s dropping back to pass, he’s having an easy time doing it. (And having Dez Bryant doesn’t hurt.)

One party pooper point: Murray’s getting enough work that it’s time to start worrying about him. It’s not only about his injury history. It’s about everyone’s. The effects of a 370-plus-carry season have been well documented. Right now, Murray is on pace for about 424. That’s just too many. During the game yesterday, Thom Brennaman pointed out a series when Murray wasn’t on the field, and he sounded surprised. If the Cowboys are a playoff team (and they look like one), we should see a lot more of those.

I should stop developing affections for random football teams. It only leads to getting hurt.

For the past month and a half, the Browns have been maybe the most exciting team in the league. They were running all over opposing defenses, chucking the ball downfield, and were just endlessly entertaining. Yesterday? Not so much. One of the league’s best offenses managed 266 yards and six points against the Jaguars.

The struggles on defense weren’t new. The Browns run defense has been horrid all year, although giving up 127 yards on 5.8 yards per carry to a former Michigan quarterback is certainly a new low.

Even when the defense has lagged this year, Cleveland’s offense has carried the team. That success started with the offensive line, which saw a major shakeup this week with the loss of center Alex Mack. With Mack gone, the Browns shifted right guard John Greco to center and started former Seahawk Paul McQuistan at guard. All that moving around means a loss of continuity and a downgrade at two positions instead of one. It showed.

A week after they managed to survive without A.J. Green, Cincinnati put up a gentleman’s zero in Indianapolis. The final score may be ugly, but this was only a 10-point game at halftime. Still, the Bengals handed the ball to Giovani Bernard and Jeremy Hill a combined 11 times against a team that came into the game ranked 31st in run defense DVOA. Hue Jackon’s mantra coming into the season focused on the Bengals running the ball, and even if it wasn’t working all that well (2.9 yards per carry for Hill and Bernard), letting Andy Dalton go 18-of-38 doesn’t seem like the best solution either. 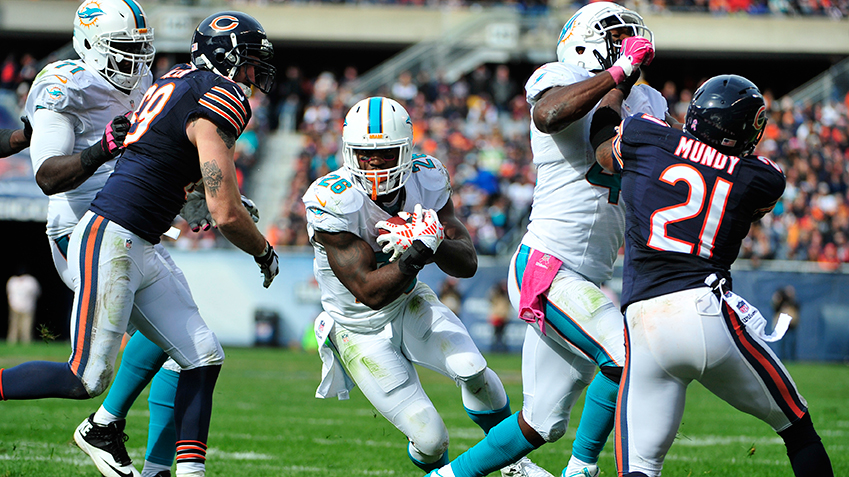 Well, where should we start? Ryan Tannehill seems as good a place as any. For most of this game, he looked like Tom Brady in that 2008 playoff game against Jacksonville — completing anything he wanted to.

Tannehill finished the game 25-of-32, which actually seems a bit low. The Dolphins had a game plan built around exploiting Chicago’s linebackers in coverage, and it worked perfectly. Charles Clay twisted Shea McClellin into the turf on Miami’s first touchdown, and Dion Sims, Lamar Miller, and Daniel Thomas did their own pass-catching damage underneath.

The Bears offense wasn’t much better. Jay Cutler averaged 5.6 yards per attempt, including two passes to Alshon Jeffery that went for a total of nine yards. Jeffery — 6-foot-3, jump-ball nightmare Alshon Jeffery — has apparently turned into Jarius Wright. It was all bad enough that Brandon Marshall reportedly tore into Cutler and a few others after the game. It’s amazing what a 3-4 start and getting booed at home can do to locker-room harmony. 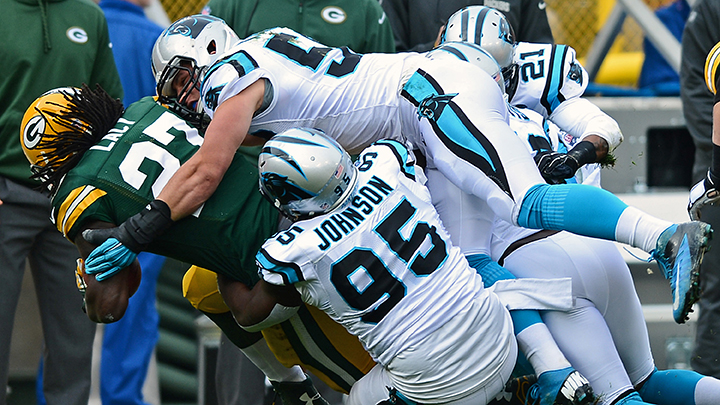 I watched the Panthers-Packers game in Wisconsin yesterday. After every Packers touchdown, the bar served1 an electric green shot in what looked like the caps of cough syrup bottles. After Green Bay’s third touchdown — with two minutes left in the first quarter — I overheard the waitress telling people to just help themselves. She couldn’t serve them fast enough.

Some garbage-time magic at least did some cosmetic work to the final score, but the Panthers were embarrassed yesterday. There have been games this year when the Packers offense has been very stop-and-start, despite having Aaron Rodgers and his duo of game-destroying receivers. There were no such problems against Carolina. Green Bay moved the ball at will in the first half, and if it would have really pushed it, half-a-hundred was in play.

Getting torched by Rodgers is one thing, but the Panthers looked like a team that’s crumbling. Thomas DeCoud got a bad personal foul in the first half. Luke Kuechly, more or less a real-life Clark Kent a year ago, was thrown out in the second.

The Panthers are an example of how team construction is rarely linear. Losing Greg Hardy didn’t help, but Carolina’s decline is about much more than that. The stopgap players from last year’s secondary — the ones who took very nice contracts to play in places like Minnesota and Pittsburgh — were replaced with even more questionable guys off the scrap heap. Antoine Cason covering Jordy Nelson isn’t going to end well.

Even with all of last season’s success, this was a team without enough resources to patch up the holes left by this offseason. Carolina is still paying Jon Beason $8 million. It’s paying $1.725 million to Jordan Gross, who could have gone to the Pro Bowl last season and unexpectedly retired. Losses like that showed up yesterday, as Julius Peppers and Clay Matthews dominated new left tackle Byron Bell and new right tackle Nate Chandler.

There was always a chance things could get ugly for Carolina this year, but I’m not sure anyone thought it would get like this.

The Percy Harvin Saga: How Seattle Lost and the Jets Won