The Percy Harvin Saga: How Seattle Lost and the Jets Won 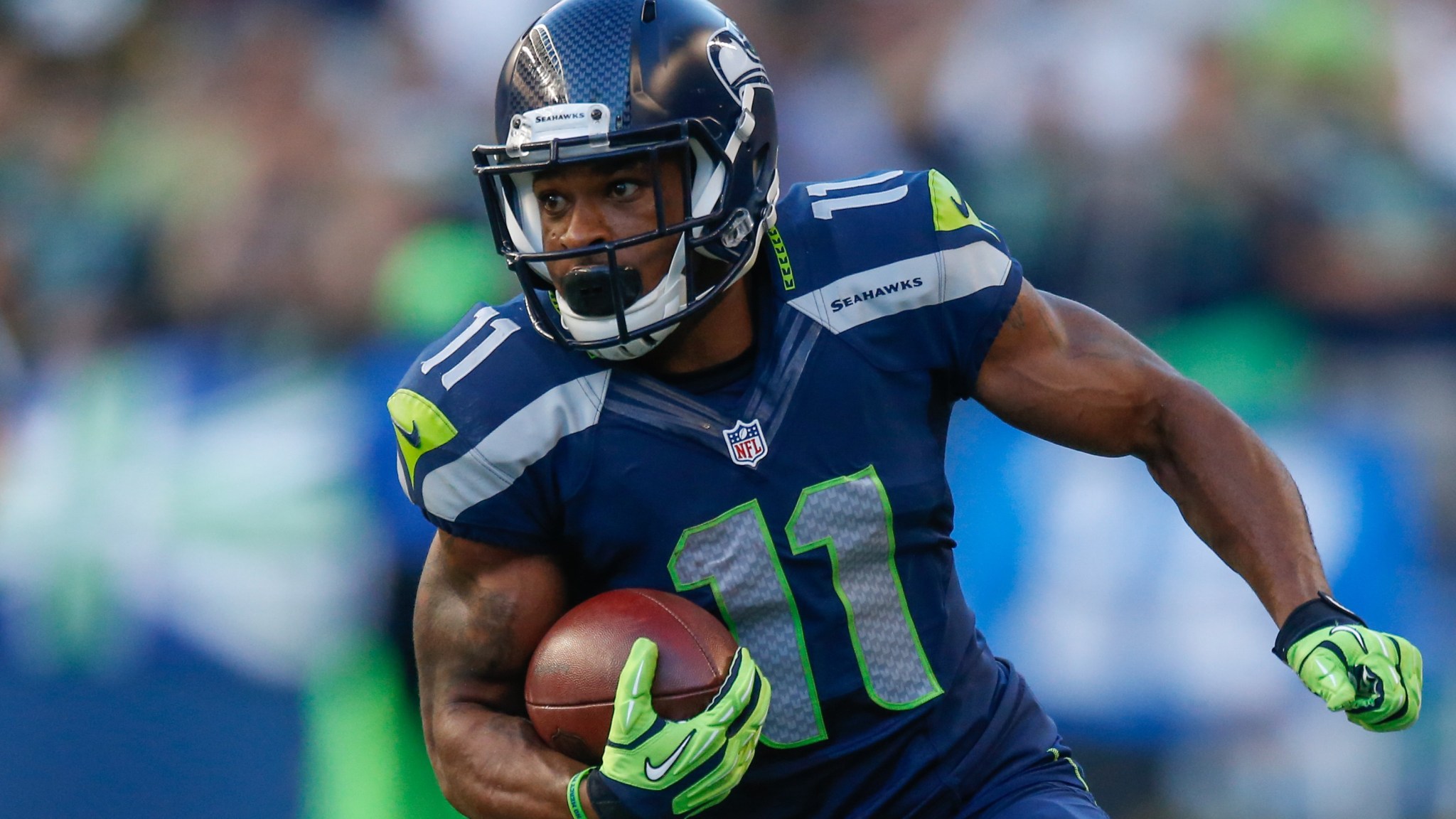 Seattle’s stunning trade of Percy Harvin to the Jets on Friday brought a sudden end to what will go down as an ill-fated dalliance. Seattle’s fling with Harvin, which cost them $18.3 million, ended with the speedy wide receiver having played just eight games for the Seahawks, in which he caught 27 passes, produced 322 yards from scrimmage, and scored two touchdowns.

One of those touchdowns was his second-half kick return in the Super Bowl, which was his best game in a Seattle uniform, and even that just consisted of the kick return, two jet sweeps for 45 yards, and a 5-yard reception in a game that the Seahawks won by 35 points. Harvin played well, but the Seahawks would have won that game if Pete Carroll returned the second-half kickoff. Harvin’s run with Seattle, even given that Super Bowl performance, has to be considered a massive disappointment and a brutal mistake by often-excellent general manager John Schneider.

While a hip injury that virtually wiped out all of Harvin’s 2013 season unquestionably didn’t help his cause, Harvin flopped in Seattle because the Seahawks never really found a match between their offensive scheme and his talents. I went back and watched each of Harvin’s plays as a rusher or receiver from this season and saw the same few concepts: shotgun sweep, jet sweep, shallow cross off the jet sweep motion, quick hitch, screen.1 His only 2014 touchdown came on one of the few exceptions to that bunch, a 51-yard touchdown on a pitch with Harvin lined up as an I-formation tailback.

Virtually every one of Harvin’s touches in the passing game came within five yards of the line of scrimmage. I only counted four passes past the sticks to Harvin in five weeks: a deep crossing route that went for 33 yards, an interception on a deep out (on what looked like a coverage misread from Russell Wilson), and a pair of passes negated by penalties, including a 41-yard touchdown pass up the seam, one of three Harvin touchdowns wiped off the board in Washington. Harvin was otherwise never thrown a go route or even a deep curl against teams scared of his speed. Crucially, there was never a play where Wilson improvised, got out of the pocket, and found Harvin for any sort of downfield pass.

It seems unlikely the Seahawks would give up on Harvin this quickly solely for struggling to fit into the offense, which naturally raises questions about whether there were off-field issues. Harvin’s past transgressions are numerous, but the Seahawks were surely already aware of those when they acquired him. Reports came out over the weekend that Harvin had gotten into altercations with fellow wideouts Golden Tate and Doug Baldwin, but it also doesn’t seem like Harvin was universally regarded as a bad teammate. Adrian Peterson previously described Harvin as the best all-around player he’d ever seen and described his reaction to Harvin’s trade out of Minnesota as feeling like “a kick in the stomach,” while a furious Marshawn Lynch almost didn’t get on the bus after hearing about this most recent deal.

The Tate story also seems weird, especially given the post-trade narrative that Harvin’s arrival and the apparent fight he had with Tate pushed the longtime Seahawks wideout to Detroit in free agency this year. While I don’t doubt those now reporting that an altercation occurred, doesn’t it seem odd that Harvin could have gotten into a fight with Tate and given him a reported black eye without a single one of the thousands of media at the Super Bowl noticing it or even hearing that it occurred? And if Tate was so upset by the fight, why did he publicly volunteer to take a hometown discount to stay in Seattle after the Super Bowl? Whatever the skirmish was, it doesn’t seem to have been very serious.

In all, the trade was likely a combination of factors; the off-field transgressions, offensive mismatches, and future injury concerns wouldn’t be enough on their own to give up on Harvin this quickly, but as a package, it might have been enough to convince Schneider and Carroll that the Seahawks were better off moving on. They were probably right to do so, but it was curious to see Seattle lauded for (rightfully) understanding that Harvin was a sunk cost and moving quickly when organizations like the Jets and Raiders are lambasted for cutting disappointing mid-round draft picks before the end of their first year. It’s the same logic, and that one organization is very good at a lot of the other things it does while the other two are not doesn’t change that logic.

The move will have financial repercussions for Seattle, both good and bad. The Seahawks don’t owe Harvin another dime in real money out of Paul Allen’s pockets, but they still owe $7.2 million in cap hits for the signing bonus, which will now accelerate onto their 2015 cap as dead money. Harvin’s cap hit for 2015 was originally going to be $12.9 million, so the Seahawks will actually save $5.7 million in cap space next year by making the trade.

Harvin’s contract comes off the books altogether from 2016 to 2018, which saves the Seahawks north of $11 million in each of those three seasons. That’s money they can now apply elsewhere. They were always going to find the $20 million or so per year in space they will need to re-sign Wilson, but this should help the Seahawks keep the likes of Bobby Wagner and Cliff Avril around in the years to come. It also gives Seattle some space to pursue a wideout in free agency next year2 if it feels like Baldwin, Jermaine Kearse, and 2014 draft picks Paul Richardson and Kevin Norwood aren’t enough for Wilson. Future financial flexibility unquestionably played a role in this deal.

For the Jets, meanwhile, it’s a great deal. This is exactly why you don’t spend to the cap for the sake of winning newspaper inches; you never know what sort of distressed assets are going to hit the market when you least expect it. It’s the same logic and path to how the Ravens have signed Elvis Dumervil and Steve Smith late in free agency over the past two years, or how the 49ers came away with Donte Whitner and Dashon Goldson in 2011 when they both failed to get the offers they wanted in free agency.

The difference between spending $10 million on three or four free agents on one-year deals and spending $10 million per year on Harvin is that the free agents the Jets would be signing were likely replacement-level talents, guys whom smart teams find in the bargain bin for the minimum. You can’t find a freely available player with Harvin’s skills and athleticism. Those players almost always come at a premium.

I say almost always, of course, because this is the rare exception. The Jets only needed to give up a conditional pick, reportedly a sixth-rounder capable of improving to a fourth-rounder if Harvin stays with the Jets past this season, to acquire the receiver. Even more notably, the Jets really aren’t incurring much risk. The only guaranteed money left on Harvin’s deal is the remaining $6.5 million in base salary left in 2014. After this year, the Jets have Harvin on a four-year, $41.5 million contract that consists solely of base salaries.

If Harvin acts up or the Jets decide they want to move on, they can cut Harvin with no cap repercussions whatsoever. (They can also trade him if he reemerges as a worthwhile weapon and they want to sell high.) It’s a deal that has nothing to do with Rex Ryan or John Idzik’s job security; it’s simply a smart risk to acquire a guy who was worth in excess of a first-round pick 20 months ago. Harvin is probably going to take some time to adjust to the Jets offense, and they’re still not going to win a lot of football games, but he can be part of the long-term solution in New York.

As for the Seahawks, they won’t miss the money. What they’ll really rue is the opportunity cost. They traded first-, third-, and seventh-round picks to the Vikings for Harvin, and two of those picks have already made names for themselves: Cornerback Xavier Rhodes is rounding into an above-average starter, while running back Jerick McKinnon has shown flashes of brilliance in his rookie year.

The Seahawks aren’t exactly in need of a halfback or a cover corner these days, but they could use another Vikings player: speedy wide receiver Cordarrelle Patterson, a player commonly compared to Harvin who still would have been on the board at no. 25. The Vikings drafted him at 29. They signed Patterson to a four-year, $7.2 million deal after the draft that locks him up through 2016. Patterson has struggled this year, but he’s a cost-controlled asset that allows his team to spend elsewhere. The Seahawks, just to pick one clear example, could have had three more years of Patterson, a third-round pick, and whatever else $10 million in cap space could have bought this year.

As the likes of Richard Sherman, Earl Thomas, and Wilson sign new megadeals, the Seahawks will need more players on rookie contracts who deliver production for a relatively low cost. It’s how the Seahawks built their Super Bowl–winning team in 2013. That’s what made this Harvin deal so curious the day it happened; it was adding another high-priced asset to a team that was about to need all the cap space it could muster.

The only way Schneider and Carroll could have justified the move, given the hefty pricetag, is by believing that Harvin was going to be one of the best offensive players in football after arriving in Seattle. He hasn’t been anywhere close, and even if the Seahawks had kept him through this year, they probably would have dumped Harvin this offseason after his guaranteed money ran out. It was a bold risk that didn’t pay off. That will happen. Sometimes, even the best in the business get it wrong.