Five MLB Free-Agent Bargains: When to Buy the Generic Over the Name Brand 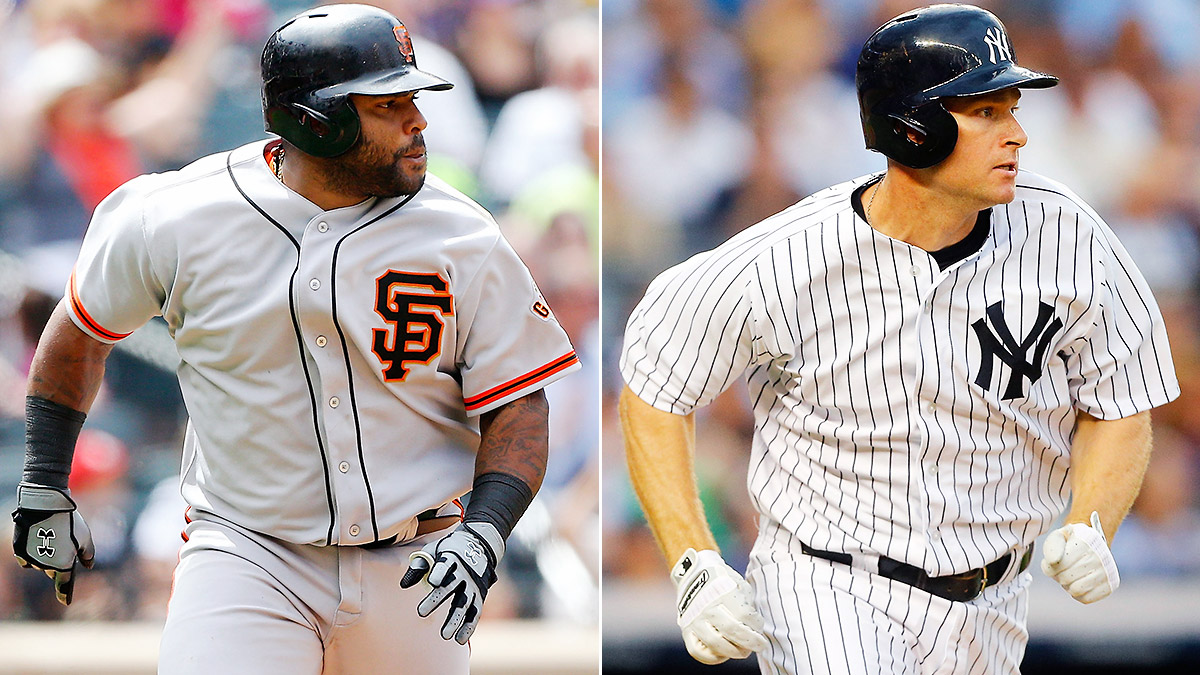 Every time a player signs an extension, a potential free agent dies, or at least postpones his arrival on the open market until he’s past his prime. In recent years, potential free agents have been dropping like flies as more teams have used their increased revenue from local and national TV contracts to embrace the potential for savings that comes with early extensions. We’ve known for some time that this would be a weak class for free agents, and earlier this year, I tried to quantify how thin the current crop would be. I collected “Top 50 Free Agents” lists from MLB Trade Rumors for the 2005–06 offseason through the 2013–14 offseason and compared retroactive projections for the players on those lists to 2015 projections for the Top 50 presumptive free agents this winter. The numbers confirmed the hypothesis: Pending clarification on the status of some international players, this is the weakest free-agent class in recent memory, particularly for position players.

At some positions, there’s no attractive free-agent alternative to the name brand. Want a catcher? You can choose between Russell Martin and a bunch of backups. Need a center fielder? After Colby Rasmus — who’s hardly a safe bet himself, having posted sub-.300 on-base percentages in two of the last three seasons — the best option is probably Chris Young, who’s less than three months removed from being released by the Mets. Missing a second baseman? The cupboard is bare, so it might make more sense to trade for one, persuade someone to switch positions, or, failing that, petition new commissioner Rob Manfred to remove the position from the field.

Although the pickings seem slim aside from a few elite arms, scarcity on the free-agent market might not drive up prices for the top available players as much as one might think, because demand doesn’t necessarily outstrip supply. The fewer high-quality free agents there are at a given position, the fewer teams are losing good players at that position to free agency, so while a certain player might be the best on the market, there still might not be much of a market for him.

(Martin seems set, regardless: Not only is his former team, the Pirates, eager to retain him, but the Cubs and the Dodgers, who lacked strong catchers last season, are interested in outbidding Pittsburgh. In cases like his, however, opportunistic teams fill the free-agent void by dangling their own assets: With teams transfixed by Martin, the Diamondbacks have reportedly become more willing to trade Miguel Montero, another above-average defensive catcher who’s a few months younger than Martin and whose bat had been better than Martin’s until the past two seasons. Similarly, a dearth of desirable free-agent shortstops has made the White Sox’s Alexei Ramirez a popular trade target.)

At this time of year, clubs can learn a lesson from the behavior of other smart consumers. In economic lean times, many shoppers have discovered the cost-saving virtues of generic drugs and store brands that feature the same active ingredients as more established brands. Teams should take note, because every free-agent market includes some generic, store-brand baseball players. They’re the Fruit Swirls to the higher-profile free agents’ Froot Loops, the Rainbow Treasures to their Lucky Charms. They might not have the name recognition or a super-agent doing their advertising, but they have the same primary skills, similar packaging, and lower price tags. They might even pass a blind taste test, or come close enough that the difference doesn’t justify the extra expense for the marquee names.

So who are this year’s generic-brand bargains? I’ve gone through this exercise before, but with this year’s thin crop, I’ll have to work harder. Below are several cases where a lower-ranked free agent might provide better value than a player who’s closer to the top of the list. The numbers in parentheses represent each player’s position on this year’s MLBTR ranking.1

Markakis might not be a free agent for long: Although the Orioles declined their side of the $17.5 million mutual option for 2015 included in Markakis’s contract, they’re interested in keeping him and confident that they can. For now, though, he’s available to the highest bidder — who might be better off saving some cash and joining the Aoki auction instead.

Both players are divisive on defense. Although Markakis won a Gold Glove this season (his second), he finished ninth among right fielders in the voting for the more statistically influenced Fielding Bible Awards. And while the postseason familiarized America with Aoki’s circuitous routes in right, the stats over a three-season sample suggest that he’s efficient enough. Both DRS and UZR rate Markakis 13 worse than average in right from 2012 to 2014, while the two systems say Aoki was 13 and 12 runs better than average, respectively, over the same span. While Aoki flunks the eye test and Markakis flunks the statistical test,2 it’s likely that their glovework is more similar than the numbers would suggest.

Neither player has the power typical of a corner outfield spot. Aoki has slight edges in batting average and on-base percentage, and that’s without accounting for his underrated ability to reach base on error, which isn’t incorporated into OBP. To some extent, reaching on an error is a repeatable skill, and other than being left-handed, Aoki, a ground-ball hitter with speed who puts the ball in play, fits the profile of a player who’s more likely to force misplays. Over the past three seasons, only Elvis Andrus (who’s made almost 300 more plate appearances than Aoki) has reached base on error more often than Aoki’s 35 times. Markakis, meanwhile, has reached base on error only 12 times in the same period. All told, Steamer gives Aoki an infinitesimal edge on offense, projecting him for a 106 wRC+ to Markakis’s 105 in 2015.

Aoki is two years older than Markakis, but he’ll probably settle for a shorter contract and could deliver a greater return on investment.

One year ago, Drew ranked 14th on MLBTR’s Top 50 list. Estimates of his annual earnings clustered in the $12-13 million range over two to three years, despite the draft-pick compensation imposed by his declined qualifying offer. However, whatever offer he and agent Scott Boras were expecting didn’t materialize, so he sat out the first two months of the season before finally signing with the Red Sox on May 20 (for the prorated qualifying-offer amount) and getting into his first game on June 2. In retrospect, he might have put himself in a position to make more this winter had he held out all season, since he finished the year as the worst hitter in baseball who made at least 300 plate appearances.

Now Drew has nearly fallen out of this year’s Top 50, with a weaker group of position players and no draft-pick cost attached. Bad as he was, though, we probably shouldn’t give up on his bat based on an 85-game sample, given that he missed the standard spring-training experience, went seven months without facing major league pitching, suffered a hamstring strain, and was traded to a team (the Yankees) that asked him to move to a position he’d never played professionally (second base).

It’s possible that Drew really did get old over one offseason, despite Boras’s February proclamation that “talent has no wristwatch,” but Drew remains a playable shortstop, which few other domestic free agents can claim (hence the Orioles’ haste to lock up J.J. Hardy). In contrast, Lowrie has been the worst defensive shortstop over the past two seasons, according to DRS. In fact, Lowrie might have to move to second, which would eat into his offensive advantage over Drew, and neither player is a model of durability. I’m essentially making the same case for Drew that Boras has, but even Boras occasionally says something accurate about a client.

Sandoval’s October heroics have supplanted most memories of his September struggles, but the teams that consider committing to him will be considering his whole season, not just the highlights. Sandoval’s power, patience, and overall production declined slightly for the third straight season, even after adjusting for the weakening offensive environment, and he was one of the game’s worst base runners. At 28, he’s young for a free agent, but concerns about his conditioning might cause teams to treat him like an older player, although there are big-boned batters who’ve thrived through their early 30s.

For now, Sandoval is useful in the field, but Headley, who’s two years older, is as good as it gets with the glove. He bounced back at the plate after a first-half slump (and, coincidentally or not, a grip change) and projects as a comfortably above-average hitter, if not nearly the MVP candidate he was in 2012. Steamer expects 4.1 WAR for Headley next season, compared to Sandoval’s 3.8 in the same number of games. Maybe that’s overly optimistic, but if Headley’s contract goals are more modest, teams might be wary of giving a star-level salary to Sandoval, who’s seeking six years but hasn’t topped 3 WAR since 2011.

I considered making a case for Brandon McCarthy here — as Jeff Sullivan observed, McCarthy and Shields have similar projected peripherals for 2015 — but most of the pitchers ranked above McCarthy have distinguished themselves by maintaining their durability over an extended period, while McCarthy has been injury-free for only one season. Kuroda combines the effectiveness and innings counts that Shields’s suitors are seeking, even if he lacks Shields’s value as a mentor.

Clearly, these are two starters at different stages of the professional life cycle. Shields is 32 and looking for a long-term deal, while Kuroda turns 40 in February and will have to be talked out of retiring or returning to Japan, which means that he’s probably only a realistic option for the Yankees or a West Coast team. Kuroda isn’t a solution for a team that’s looking for a long-term rotation mainstay, but a club in the market for a single season of Shields-level production could minimize its exposure by counting on Kuroda to continue to do what he’s done for the past several seasons.

Kuroda is almost eerily consistent. He has averaged 203.2 innings over the past five seasons, transitioning with ease from an NL pitcher’s park to an AL hitter’s park, and his K-BB percentages have hardly fluctuated since his sophomore season in the majors:

Depending on the WAR variant, Kuroda has either topped Shields by two wins’ worth of value or trailed him by one over the past three seasons. At his advanced age, the chance of a collapse is elevated, but paying Shields to sustain his heavy workloads into his late 30s also carries some risk.

Robertson will be the best free-agent reliever available, assuming he rejects his qualifying offer from the Yankees; Gregerson might be the best available right-handed setup man who’s never gotten a real crack at a closer job. Both pitchers are likely to total around 65 innings, Robertson with many more strikeouts and Gregerson with more grounders and fewer walks.

I’m tampering slightly with the formula here, in that the question isn’t whether Gregerson is just as good as Robertson; it’s whether Robertson is so much more valuable that he’ll be worth the gulf between their earnings. Steve Adams of MLB Trade Rumors predicted a four-year, $52 million deal for Robertson, while MLBTR founder Tim Dierkes forecasted three years and $20 million for Gregerson. That figure for Robertson is probably high, given the qualifying offer, but it’s certain that he’ll cash in, in part because Mariano Rivera retired and Robertson was asked to replace him, while Gregerson — through no real fault of his own — has remained in a setup role.3 Gregerson’s low velocity, heavy slider use, and history of playing in pitcher’s parks are reasonable causes for caution, but it’s usually wise to avoid paying a fortune for past and future saves, if only because the upgrade from a very good pitcher to a great one is meager over the small sample of a non-Betances reliever’s season.