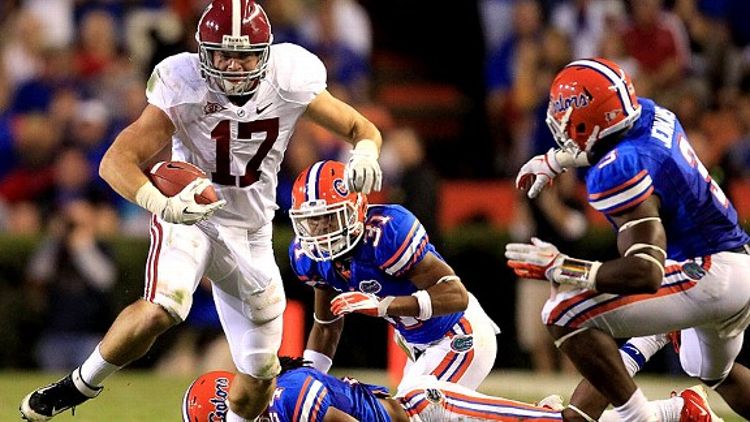 Here at the Triangle, we consider ourselves connoisseurs of a good name. That said, we’re ready to bestow this year’s awards for the best names in college football at every position. It’s like a Gold Glove, except way more legitimate. This installment covers the offense.

Quarterback: Munchie Legaux, Cincinnati — He’s only played in two games for the Bearcats, completing 5 of 7 passes for 71 yards, but he’s the undisputed starter on our squad. This team can’t get very high without Munchie.

Steele Jantz, Iowa St. — If football doesn’t work out, he can always license his name to harlequin romance novelists.

Mackenzie Sovereign, Duke — He plays by his own rules.

Spencer Whippie, Miami — If football fails, he can always license his name out to quirky children’s book writers.

Running Back: Montana Bencomo, New Mexico State — This is like some crazy combination of Big Sky Americana and New Jersey mafia. And it rolls right off the tongue. It does not appear that Bencomo has a carry for the Aggies this season, which is a damn crime.

Kapri Bibbs, Colorado State — A new kind of decorative top for soccer moms who like to dine out?

D.J Shoemate, UConn — I love and hate the idea of what a shoemate might entail.

Fullback: Sam von Paris, Navy — I’ll fully admit that the combination of name and school played a part in this choice. Sam von Paris sounds like a super-dignified sea captain with a great beard and a penchant for drama. Whenever he goes into battle, he stands at the prow of the ship, totally fearless. Remember that time von Paris tricked the entire Spanish armada with an elaborate mirror illusion and rescued the Duchess’ silver?

Prentice Christian, Navy — Not a full-time Christian yet. (Nice job on fullbacks, Navy)

Austin Raphael, Fresno State — This guy is clearly a European male model destined to have his own clothing line.

Ali Alaboody, Bowling Green — This is also what you say to make a secret cave open.

Damarlo Belcher, Indiana — When your last name is “Belcher,” you have to give your kids a weird first name to distract everyone.

Cermak Bland, Northwestern — When your last name is ‘Bland,’ you have to give your kids a weird first name so nobody thinks you’re boring.

Lincoln Carr, Louisville — When your last name is ‘Carr,’ you shouldn’t name your kids after an actual car company.

David Crocket, Fresno State — Born on a mountaintop in Tennesee…

Dakota Haines, Texas — I had to include him; he’s Montana Bencomo’s trusty sidekick.

Ja-Mes Logan, Ole Miss — Oh, so James wasn’t good enough for you? Not fancy enough? You had to add the hyphen, didn’t you? You had to be special.

Fritz Rock, Illinois — He just made that name up to sound tough.

E.L. Smiling, Virginia Tech — I like to think the E.L. stands for “Everybody Loves,” and his parents were huge hippies.

Shaq Washington, Cincinnati — I’m not even sure why I’m including this, but it made me laugh. But after reading through a list of like 8,000 receivers, a lot can make you laugh. And cry. And shake.

Tight End: Blake Blaze, Virginia — Some guy: Hey man, who do you think we should start at tight end? Me: Gee, I don’t know … maybe the coolest guy in the world?

Taylor Elmo, Idaho — You think his friends call him ‘Tickle Me’? Probably not, right? Not even sure why I’m asking.

Tyler Perry, Oregon State — I hope this guy gets drafted by Cleveland, so he can Meet the Browns. Am I right, guys? High fives? High fives all around? Who’s got me? No one?

Brad Smelley, Alabama — To be fair, a lot of people are Smelley in Alabama.

Isaac Virgin, South Florida — This is also what defenders say when they tackle Tim Tebow behind the line of scrimmage.

Guards: Rio Mares, Tulane, and Omeregie Uzzi, Georgia Tech —
Rio Mares is evocative of a masculine horse-rustling scene from a western, and I will always include a dude whose last name is (almost) the same as a badass Israeli submachine gun.

Tackles: Mitch Smothers, Arkansas, and Dallas Butts, Navy —
You gotta have Smothers and Butts on the line! You gotta! And yes, my offense has 12 people. It’s revolutionary. Deal with it.

Here’s the full rundown of starters:

This team will not lose. Check back next week for the defense.