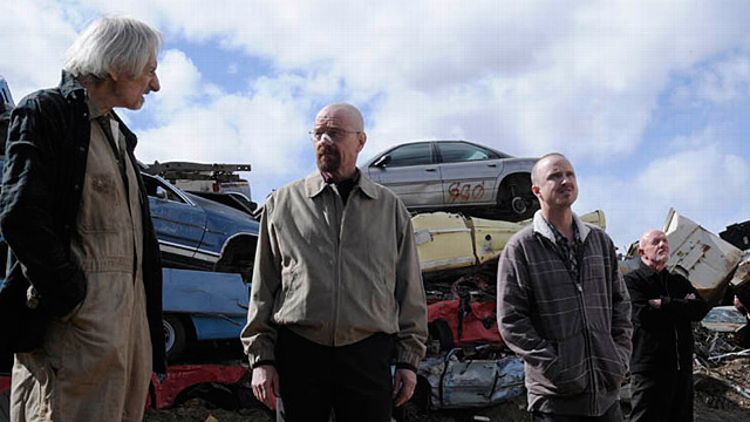 Breaking Bad! It’s back! Finally! Actually it’s only been gone for nine months — basically a human gestation period — but for some reason it’s definitely felt more like a Jessica Simpson pregnancy.

The truth is we needed the time to recover. It’s not good for the heart to deal with mass alcohol poisonings and enkindled drug lords combusting (then coming back to life momentarily to adjust their neckties seconds before collapsing to the ground for good). Trust me, we needed the break.

But now we’re ready to be dazzled by the most intense, most well-written, most perfectly cast drama since The Sopranos. And the best part about Season 5 is, you can actually bet on specific things that are going to take place in these final episodes.

5/2: Odds the series ends with Walt killing Jesse
That would be cool.

9/2: Odds the series ends with Jesse killing Walt
That would be pretty cool, too.

10/1: Odds the series ends with Hank killing them both by forcing precious minerals down their throats

OK, now I’m really starting to get pumped for this season. One of those first three props had better hit.

Even: Odds Walt Jr. becomes addicted to drugs this season
Remember the time when, in a classic display of bizarre parenting and control, Walt Sr. forced his handicapped son to do tequila shots that ended up in vomitous form in the deep end of the family pool? So does Walt Jr. Time to step it up.

Over/under 47.5: Times Skyler asks Walt “Are you/we in danger?”
It’s really what she’s best at. And it’s obvious she doesn’t care what the answer is. Off-topic a little — is it me or does every wife/mother on AMC suck? Skyler. Betty Draper. Mitch Larsen on The Killing and Lori Grimes on Walking Dead. Each is worse than the one before. The development executives at AMC had some real mommy issues.

Over/under 72 beats per minute: Mike’s highest measured heart rate
I go under. Whether he’s fighting off Mexican gang bangers or Afghani insurgents in Kabul, Mike never flinches. He delivers his lines with the coolness/apathy of a Gregg Popovich halftime interview. He’s without a doubt the coolest cat in the business this side of Winston Wolf.

Over/under $12,519.73: Amount that Hank’s kleptomaniac wife Marie steals in merchandise during Season 5
And inexplicably, a good portion of it will be made up of purple items. “What the fuck, Marie? Do we really need another lavender door knocker?”

Over/under 3.5: Times we see Saul Goodman open his safe this year
And each time he opens it you can be sure he’s extracting comedy gold. Incidentally, I just learned this week that Saul Goodman’s name is derived from “It’s all good, man.” Love this guy.

75/1: Odds that creator Vince Gilligan completely switches gears, turning Season 5 into a sitcom focused on the Whites’ wacky escapades running a car wash.
Someone please, please put this together for YouTube.

Over/under equivalent of three mortgage payments: Amount I’d spend on the original bell used by Uncle Hector
Take the over. As far as my most desirable classic TV props go, that bell is third behind only Archie Bunker’s chair and the actual Love Boat.

1/9: Odds an entire episode is dedicated to Heisenberg preparing Passover seder
His beitzah is to die for … and 96.3 percent pure.

75/1: Odds Badger and Skinny Pete get a spin-off
I can listen to these two trade drug-induced observations on the legitimacy of Nazi zombies for … you’re right — I can’t listen at all. Spin-off’s a bad idea. Don’t worry, they’re not going to last past Episode 3 anyway.

100/1: Odds the Bacon Brothers finally strike it big by reinventing themselves as Los Pollos Hermanos
If Kevin Bacon finally wants to make a name for himself, this is the way to do it.

1/3: Odds that the day after Thanksgiving we’ll read about a huge Breaking Bad fan trying to poison a relative during a dispute using a Lily of the Valley plant
Great — now that that’s out there I’ll have to figure out a different way to do it.

New Community Showrunners Humbly Pledge Not to Screw Up the Show