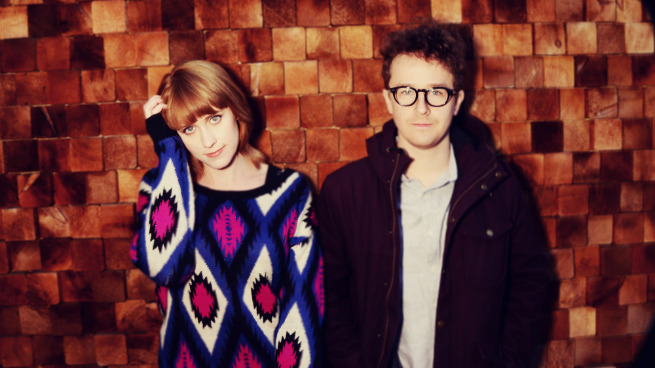 Not quite a minute into its fourth full-length album, Shriek, Wye Oak steps into the sun. “This morning, I woke up on the floor / Thinking I had never dreamed before,” sings Jenn Wasner, in the soulful alto that is by now instantly recognizable to any fan of the band. It’s a hopeful melody, one that feels almost improvised, buoyed by a halo of a synth line. From this song alone, you wouldn’t necessarily guess Wasner and bandmate Andy Stack had to go through a fair bit of hell before arriving at it. It’s an evocation of a new beginning — but like Shriek itself, one that by definition could not exist without what had to be cleared to make way for it.

I sat down to talk to Wasner and Stack earlier this month at the Coachella festival in Indio, where they were already well into a spring-and-summer-long tour. That morning, the L.A. Times had posted a report that a mere fifth of the acts at this year’s festival were woman-fronted — and that this was the most female-heavy lineup in the fest’s 15-year history. As part of that statistic herself, Wasner was surprised as I was: “I feel like every band I’ve seen has been female-fronted!” Wye Oak’s Friday set was scheduled opposite Katie Crutchfield’s Waxahatchee; Wasner would run off to catch the back half of Haim’s set after our conversation. And that was to say nothing of the next day’s schedule, which included poppier acts like Chvrches, Banks, and Lorde. Even if the numbers don’t reflect it, there’s a bit of a renaissance of female-driven pop and rock happening right now, one Wye Oak could be seen as an early part of.

This is the band’s first big schlep since a grueling two-year, 300-odd show tour in support of its last LP, 2011’s critically acclaimed Civilian, and it’s not a lifestyle Wasner’s particularly psyched to get back to. “Mostly I hate it,” she says of road life. “I wish it wasn’t a necessary part of being in a successful band. I really would prefer to work on new music all the time.” Wasner battled acute anxiety after the release of the last album, and she talks about the Civilian tour the way one might talk about a traumatic breakup or a prolonged illness. “We weren’t really living anywhere, and it was a really intense time for us.” She cites both personal and creative upheaval as grounds for that rocky time, noting that, “unfortunately, I have no boundaries between one or the other, so …” Even now, playing through the old material, much of which vastly elevated the band’s profile in the past few years, brings back the bad old days. “They make me really tense,” she says of those songs. “It’s very unpleasant.”

It’s unfortunate, but not necessarily surprising, because Civilian is the kind of album that gets under your skin in the most agonizing way possible. Its cathartic palette of guitars and reverb is instantly accessible to anyone raised on a diet of ’90s indie rock like Yo La Tengo and early Modest Mouse, but never backward-looking, and filled with emotional hooks for those who weren’t. I remember listening to Civilian on a road trip; after a long silence, my traveling companion turned to me and said, “Do you like listening to music just to make yourself sad?” Sure, sometimes! But there was a kind of chill-inducing reverse empowerment in the album’s embrace of frailty paired with Wasner’s wildly distorted guitar, even if a line like “I am nothing without a man” was the kind of lyric that would get you banned from Lilith Fair for life a couple decades ago.

Shriek, out today on Merge, is a marked departure from all that, in a way that feels not so much calculated for innovation as forced out of necessity. Most notably, Wasner’s guitar — the chugging, soaring heart of Civilian — is gone; she primarily plays bass now, and the lead has been swapped for a host of Stack’s ethereal synths, a decision very much tied to the Tour That Shall Not Be Named. “What I discovered when I got home and tried to write was that a lot of that baggage — that sort of negative, dark emotional baggage — had gotten tied up with the guitar specifically,” Wasner says. “I think it became necessary to distance myself from the object that came to symbolize a lot of those difficulties for me.” The guitar-less Wye Oak both is and isn’t hard to get used to. It’s not as if the band has traded for turntables; though the sound is lighter, it’s still stretched securely around Wasner and Stack’s drum-tight structure and melodies. 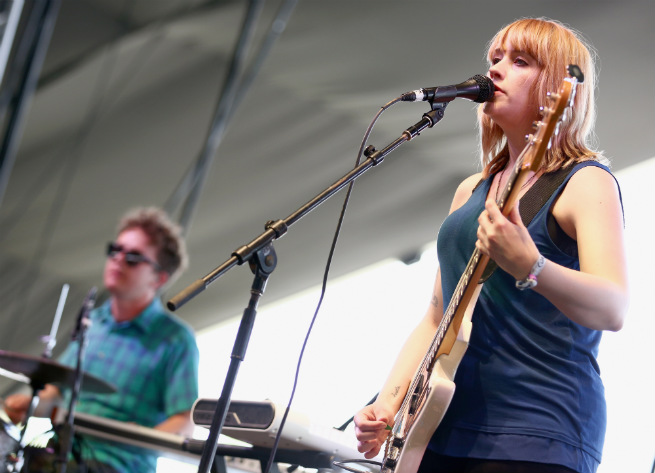 Also taken out of the equation: face time. In the past, Stack says, songs would typically start with a skeletal idea from Wasner, “then we’d get together in a room and flesh it out in person and then record it.” But for Shriek, the two wrote the songs while almost 3,000 miles apart; Stack had moved to Portland, Oregon, while Wasner continued to work out of the band’s original hometown of Baltimore. “Each song was a sort of a different process. The only consistent thing was that we were never actually together while we were writing,” Stack says. They’d build songs in a kind of musical continue-the-story process, adding and developing on top of each other’s ideas. “By the time we got to the studio, everything was pretty fully formed in a nice way.” This time around, their studio time was used more for production than writing. “And that’s something that definitely took us, intentionally or not, further and further away from this ‘folk’ moniker that people have ascribed to us,” says Stack. “We were really able to make the studio be the instrument.”

Oh yeah, that dreaded “indie folk” label. Or, depending where your Googling lands you, “dream pop” or “newgaze.” “Nobody knows what any of that shit means,” Wasner laughs. With any luck, Shriek will free the band even more from such expectations.

But the regrouping wasn’t as simple as merely rearranging the decks. “I discovered that when I started meditating to try … to soothe my anxiety and be happier in general, the way that I felt when I did it successfully was very similar to the way that I felt when I got really in the zone with writing,” Wasner says. “A lot of these songs are sort of designed to be physically and mentally calming; they’re these mantras or affirmations that I’m able to write, and they’re soothing.” And bound to travel better, as well. “I have all this newfound stage anxiety, and the second I start playing the very first song [off Shriek] that we play, I’m instantly calmed by it.”

If all this talk of light and meditation and distance sounds like enough to throw fans of Civilian and the band’s more folk-driven If Children and The Knot — well, it could. Shriek is a less tactile album in general, though still in a strong orbit around Wasner’s gritty, familiar vocals and Stack’s propulsive drums. Nowhere is this more evident than on the album’s exhilarating centerpiece, “Glory,” which you’d never even notice is “missing” the guitar because of the relentless build of literally everything else. It’s the kind of song you keep turning up as it charges on; it begs to be sent through the roof and into space.

If I miss the guitar at all, it’s only because Wasner was one of a handful of contemporary up-and-coming musicians who really seemed to have something to say with the instrument. (Or perhaps I should say, Wye Oak was one of the few guitar-led acts that made me stop and pay attention in the last decade.) But Wasner has been moonlighting as a pop experimentalist for a while; the 2013 album she released under the name Dungeonesse and her solo project Flock of Dimes (both of which she worked on after the release of Civilian) make a bouncy, retro-tinged closer like Shriek’s “The Logic of Color” make sense. And it seems like going forward, the only constant for Wye Oak will be flexibility. “Now we have a setup where we can do whatever we want,” Wasner says. “Whatever songs I write, and whatever instruments I write them on, the setup is in place. That was kind of the ultimate goal, in a lot of ways. I was really excited that that was a possibility. When I write again, I can write however I feel inspired.”