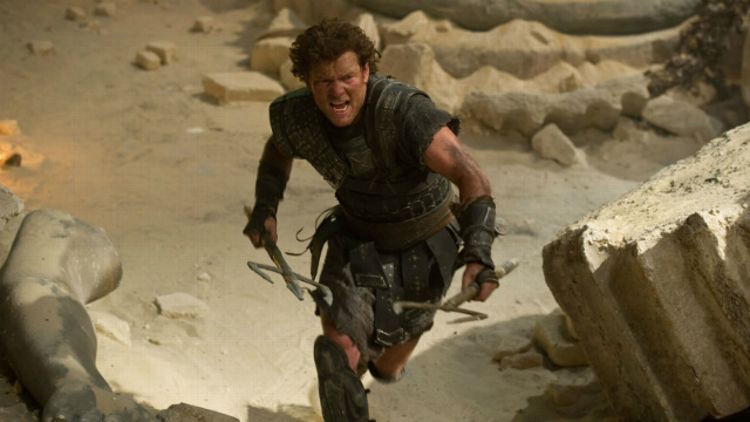 You should maybe go see Wrath of the Titans, the sequel to Clash of the Titans, this weekend. Why?, you ask? It looks really dumb, you say? It’s not even clear that any Krakens will be released, you astutely point out? Listen: I have it on good authority that it is, at least, better than the awful first movie. None other than its star, heroically candid Australian-Na’vi Sam Worthington, said so!

First, here’s why Clash was terrible: “I let the audience down a bit by not delivering a character. I was a fucking generic, bland action dude. I was like a Barbie doll. And I didn’t like myself for doing that. I dropped the ball.” And then, here’s why Wrath will rule: “The only point of doing a sequel is either the audience demands it or you believe you can better the first one. What we’re setting out to do with this one — the writers and the director and myself — is improve. I think I can act fucking better, to be honest … Just take all the notes from people that I have been reading about on the ‘net and give them a movie they fucking want. This one I want to kind of try to satisfy a lot more people.”

When plugging Transformers: Dark of the Moon, Shia LaBeouf made sure to hate on Transformers: Revenge of the Fallen: “When I saw the second movie, I wasn’t impressed with what we did. There were some really wild stunts in it, but the heart was gone … We got lost. We tried to get bigger. It’s what happens to sequels. It’s like, how do you top the first one? You’ve got to go bigger. [Michael Bay] went so big that it became too big, and I think you lost the anchor of the movie. … You lost a bit of the relationships. Unless you have those relationships, then the movie doesn’t matter. Then it’s just a bunch of robots fighting each other.” But, see, it wasn’t really their fault that Revenge was incomprehensible: “The second movie, we were in the middle of a writers’ strike, writing on the go … [Dark] is, and I’m not just BS-ing you, it’s the best movie we’ve made of the three by far.” And Michael Bay himself agreed that the second one was godawful: “This one is much more of a mystery. It’s really epic in scope, it’s got more heart. It’s kind of back down to basics. Movie two, we kind of went off on a tangent.” Note: As of publication, neither Shia nor Mike have explained why they lied to our faces. (At least Megan Fox, later to be cut from the series, spoke the truth: “I’m in the movie and I read the script and I watched the movie and I still didn’t know what was happening. I don’t know how you saw it in IMAX without having a brain aneurysm or at least a migraine headache!”)

Daniel Craig blames the failings of the last Bond movie on the writers’ strike as well: “In Quantum [of Solace], we were fucked. We had the bare bones of a script and then there was the strike and there was nothing we could do. We couldn’t employ a writer to finish it. You swear you’ll never get involved with shit like that, and then it happens!” He even pitched in on the script, he says, “and a writer I am not.”(Aww, that is an endearing amount of self-deprecation, Daniel Craig!) Anyway, the next Bond, Skyfall, is going to rule: “I really think this one is better even than Casino Royale. [Director] Sam Mendes has lived with Bond all his life, and he grew up with Bond in the same way I did. We have exactly the same reference points, we both like the same Bond movies, and we both like the same bits in the same Bond movies we like.”

When talking up the possibility of Indiana Jones 5, Steven Spielberg made some amends for Crystal Skull by way of throwing George Lucas under the bus: “George and I had big arguments about the MacGuffin … I didn’t want these things to be either aliens or inter-dimensional beings. But I am loyal to my best friend. When he writes a story he believes in — even if I don’t believe in it — I’m going to shoot the movie the way George envisaged it … George is in charge of breaking the stories. He’s done it on all four movies. Whether I like the stories or not, George has broken all the stories.”

On the press tour for Ghost Rider: Spirit of Vengeance, Nicolas Cage lightly put down the first flick: “[It’s going to be] very different … [the directors are] not like anybody else I’ve worked with. They do things with the camera that are just extraordinary … They’re brand new. The director’s on rollerblades and hanging from wires with the camera, holding on to the motorcycle, and it’s going to be really wild.” Mmmhmm. Roller blades. Of course, Nic Cage was bringing a whole new level of hot sauce for the entirety of the Spirit of Vengeance press tour, so he may well have been making the point that Ghost Rider 2 was better than any movie, ever: “Right now, what I’m excited about is trying to create a [pauses] kind of a cultural understanding through my muse that is part of the zeitgeist that isn’t motivated by vanity or magazine covers or awards. It’s more, not countercultural, but counter-critical. I would like to find a way to embrace what Led Zeppelin did, in filmmaking.”