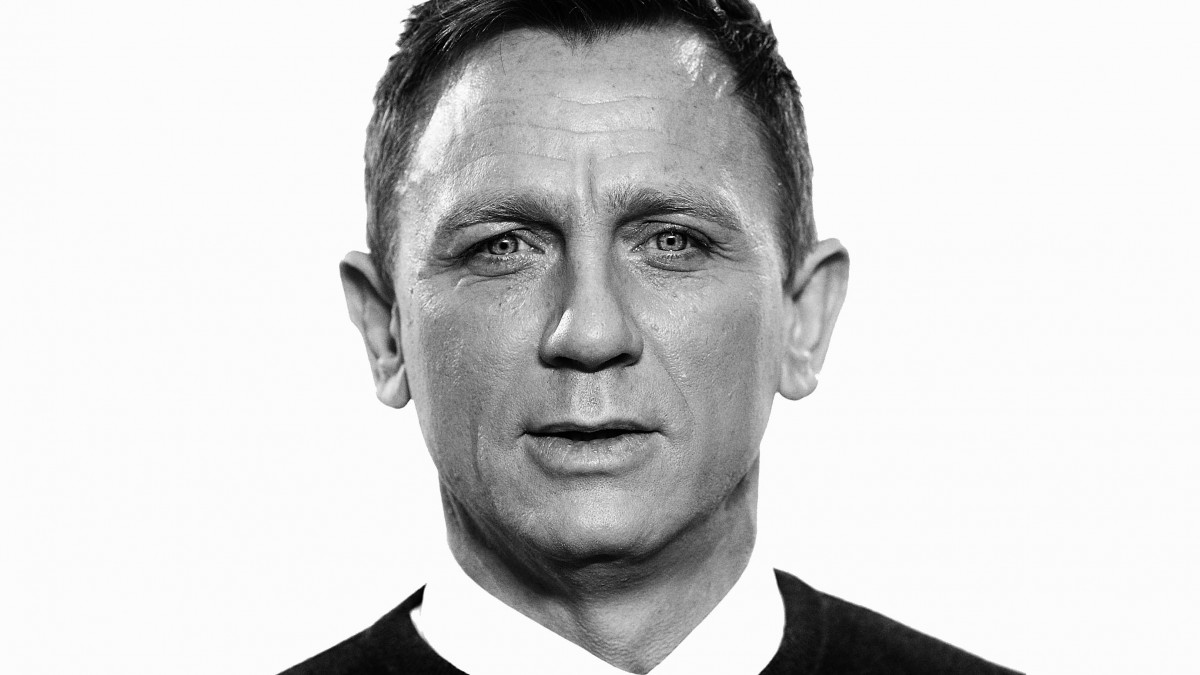 The 24th James Bond movie started filming this week, a few days after the shadowy cabal of producers who control the franchise live-streamed an announcement of its title, cast, and car. To cover the important news first: the Aston Martin DB10, a purpose-built version of the British motor company’s V8 Vantage model, has a 4.7-liter V8 engine and looks like a cross between a pretty wicked largemouth bass and Spock’s luge-sled casket from The Wrath of Khan. You can’t buy the DB10, but the regular Vantage pulls about 19 miles per gallon on the highway, so would you really want to? Premium fuel, too. The real British government may be trying to slash its way back to the ’30s, but austerity is clearly not a byword in Ralph Fiennes’s MI6.

Fiennes comes back as M in the new film, which is called Spectre, which was the name of a darkly campy group of international superterrorists Bond battled as far back as 1962’s Dr. No; the title suggests something winking and at least vaguely throwbacky. Christoph Waltz is in the cast, possibly as Ernst Stavro Blofeld, the cat-stroking criminal mastermind who inspired Dr. Evil in the Austin Powers movies. Blofeld was played by Telly Savalas in the George Lazenby–starring On Her Majesty’s Secret Service, a not-terrible film whose diabolical plot involves devastating world agriculture with a commando cell of brainwashed allergy-clinic patients. Daniel Craig returns as Bond. Craig still seems like a newcomer to 007’s fitted swim trunks, but in fact he’s been playing the role for nine years. Spectre will be his fourth Bond movie, tying him with Pierce Brosnan and putting him just two behind Sean Connery. (Three, if you count Connery’s dubiously official return in 1983’s Never Say Never Again; the only indisputable seven-timer is Roger Moore.) It’d be no wonder if the franchise were looking to up its nostalgia ante. Craig’s revisionist, borderline antiheroic Bond — not a good guy, not yet a serial killer — was threatening to overwhelm the cheery escapist fantasy it was meant to course-correct.

Nostalgia was always a major ingredient of the Bond series, even before the franchise had its own history to be nostalgic for. From the very beginning, 007 was a cry of loss hidden behind an amused smile. The British Empire reached its territorial peak just after World War I, when future Bond creator Ian Fleming, whose father was killed on the Western Front, was a schoolboy. By the early 1920s, a fifth of the world’s people and a quarter of its land were under British rule. Then, by historical standards, poof. Within 20 years of World War II, Britain had lost India, Kenya, Ghana, South Africa, Trinidad, and Singapore; had been supplanted on the world stage by the Russians and the Americans; had dwindled from a land on which the sun never set to one on which the sun set regularly and pretty hard. That this happened voluntarily and peacefully — at least by the norms of imperial collapse, which is to say not all that voluntarily or peacefully — can’t have made it much less disorienting for many men of Fleming’s generation. They grew up expecting to inherit a world their ancestors had ruled for more than a century. Then, having won two World Wars, they somehow found themselves with a ruined economy and a vanishing imperium.

Fleming wrote all 13 of his original Bond books between 1952 and 1964, during this period of contracting borders. He wrote them in Jamaica, which itself exited the empire in 1962. Casino Royale, the first Bond novel, includes a sadomasochistic torture scene — it’s repeated in the 2006 Craig movie — wherein the villain pummels Bond’s testicles with a carpet beater; could there have been a louder declaration that British manhood was Fleming’s real quarry? He’d spent World War II working as a naval intelligence officer, concocting schemes to baffle German spies. Now, drawing on his own espionage experience, he dreamed up a narrative in which the fate of the world still rested in the hands of British men, even if the world didn’t know it. The Bond stories, at their heart, were a fantasy in which the empire continued, not on the level of politics and armies and diplomacy, but in the shadows, on the level of adventure.

Fleming first conceived Bond as a “blunt instrument,” a dim man to whom exciting things happened. He named the character after the author of a guide to West Indian bird-watching, because he thought it was “the dullest name I ever heard.” But 007 — especially once Connery started playing him in the movies — quickly became a kind of embodied GQ, a walking encyclopedia of aspirational masculine traits. He wore impeccably tailored suits. He drove fabulous cars. He was lethal in a fight. He carried the latest in exploding-pen technology. He never lost his cool. He was experienced, precise, quick-thinking, unsentimental, and witty. Women wanted him, and men wanted to explain their master plans to him in enough detail to allow him to escape their spinning-blade-based death traps. The mystery writer Dorothy L. Sayers once wrote that she made her character Lord Peter Wimsey rich because she was broke when she invented him. Britain was losing its colonies, but Bond was a spectacular passport to a world of exotic seductresses and glamorous hotels and fights atop moving trains — a suave imperialist of the imagination.

None of this was subtle. Fleming loved brand names, so a reader who finished Goldfinger could rush out and buy, say, 007’s shaving cream; today, there are whole websites set up to tell you that Daniel Craig’s Bond wears Sunspel pocket polos and Crockett & Jones chukka boots. (It was a small milestone in the march of globalization when Bond stopped having his suits made on Savile Row and switched to the Italian Brioni.) The background racism in the books and the earlier movies — the legions of Asian soldier-minions, the mute Korean chauffeurs with killer hat-brims — probably felt like high fun to early-civil-rights-era white audiences, but it’s a pretty fat facepalm today. The sexism is /b/-level relentless, of course. To say Bond treats women like objects is to criticize his treatment of objects. Dead lovers upset him almost as much as improperly chilled champagne. At its worst, the Bond series inhabited a sort of neoliberal Narnia, a world of disposable people and enduring clothing labels. As far back as 1958, the writer Paul Johnson identified three basic components of the Bond mythos, “all unhealthy, all thoroughly English: the sadism of a school boy bully, the mechanical two-dimensional sex-longings of a frustrated adolescent, and the crude, snob-cravings of a suburban adult.”

Which is not wrong, even when it comes to the Craig era — remember the dead woman slathered in oil on the bed in Quantum of Solace? That shot was meant to be a sly nod back to Goldfinger, in which the Shirley Eaton character shows up murdered and covered in gold, but the self-referential wink only brought out the callousness of the pattern. Yes, yes, devastatingly clever screenwriter, oil is the gold of 2008. In choosing the corpse of a naked young woman as the medium to carry this message into a theater full of 14-year-old boys, did you stop to think you might be misinterpreted?

What saves the Bond franchise, at least for me, is — well, first, crude snob-cravings or no, Sean Connery is just really, really charming in a tuxedo. Second, the series’ vein of basic silliness is so deep and so constant that the movies wind up pre-undermining their own darkest elements. I don’t mean silly on the level of Craig vaulting off a charging Komodo dragon in Skyfall, I mean silly on the level of the following Wikipedia sentence: “Albert R. Broccoli is credited with adding steel teeth to the character.” Mix in enough submersible Lotus Esprits, cello cases repurposed as Alpine gun sleds, radioactive lint, and Timothy Dalton, and your revanchist political movement starts to look pretty toothless. Maybe it shouldn’t be as easy to go along with the fun as it is, but seriously, does anyone expect the path to a restored patriarchy to include this?

The most interesting of the Craig Bond movies is also the most commercially successful film in the franchise. 2012’s Skyfall made a cool $1.1 billion at the global box office, a figure that would make Blofeld’s hand tighten on a tuft of Angora; it also dove explicitly into some of the Bond-as-British-heritage themes that the earlier films had mostly been content to leave implicit (which is a nice way of saying “had mostly ignored in order to focus on staging weirder gondola fights,” but whatever). Bond’s arc in the film involves coming to terms with aging in a changing world — just about every scene involves some overt contrast between “tradition” or “the old ways” and the brave new world of drones and trackpads. Q is a barely postadolescent nerd-genius; Javier Bardem’s villain-lair is on a deserted island he has turned into a server farm. Borderless terrorists wild out on YouTube, and Bond’s best allies are an ancient Scottish gamekeeper and Judi Dench. Nevertheless, the film assures Bond (and us), when times get dark, the old values are still best. What the old values are, Skyfall doesn’t really say, except that they involve booby-trapping country houses and then running off to hide in the church — which, British history, fair enough.

What’s interesting about this is that Bond is portrayed as a figure of the old ways, and the old ways are consistently, even overbearingly associated with Englishness. (Also Scottishness, I guess — Bond is nominally Scottish — but Skyfall’s Scotland is basically England with fewer buildings and more tweed.) Judi Dench’s M keeps a British bulldog figurine on her desk, then deeds it to Bond in her will. When MI6’s modern headquarters is devastated by a hacker-activated bomb, the agency moves into a technologically primitive, WWII-era warren of underground tunnels that some pointed exposition attributes to Winston Churchill. The old Aston Martin in which Bond whisks M away from the villain wears a “GB” sticker on its rear bumper. “England,” Bond says in a take-no-prisoners voice when the Poindextery shrink he has to see to get kill-certified drops the word “country” into some word association. The whole film is an unusually coherent love letter to traditional, anti-technocratic British virtues. It’s preemptively nostalgic for itself.

This is a blockbuster, after all, in which Dame Judi Dench reads Tennyson’s “Ulysses” out loud to a Parliamentary subcommittee. It finds a strange note of melancholy at the end, partly because of M’s death, but also, I think, because of the contradiction it establishes in Bond’s position. He’s victorious, but he’s also a relic. He’s proven he can hack it in the modern world by proving he’s out of sync with the modern world. He’s triumphantly superfluous.

Well, what else is new? For all the series’ efforts to keep up with the externals of Our Changing Times — the very strained Beatles reference in Goldfinger, the trip to space, the environmental awareness of the sexual revolution — Bond has always been a relic; Skyfall just told him he was. It’s a move the series almost certainly won’t repeat anytime soon. You can get away with humanizing your virile spy-fantasy once, maybe. Let the odor of near-failure cling to him for too long, though, and it’s like wallpapering over your escape hatch. Spectre can’t afford to dwell on shots of a stubble-coated, puffy-eyed Bond sucking at target practice. Skyfall reminded us that Bond is the British Empire, but now someone has to run the place. Plus, being a vulnerable, flawed person is hard. Bond’s audience has lower standards. We only want him to be perfect.