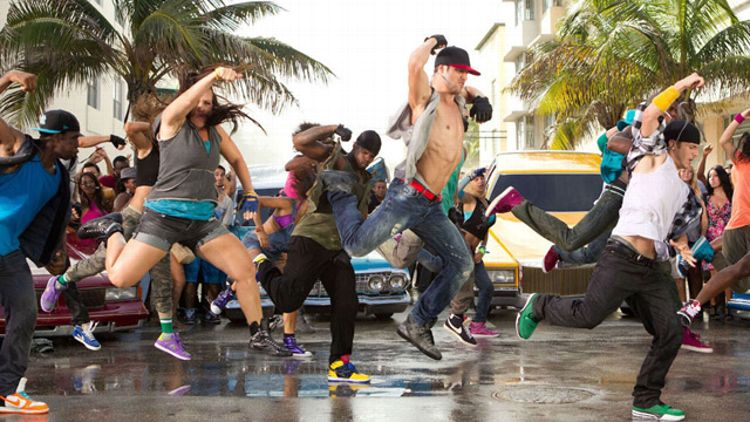 Well, no. But let’s consider what we’re dealing with here. If you were one of the $11.8 million’s worth of people who saw Step Up Revolution this weekend, were you partaking — possibly unknowingly, while gleefully enjoying all those smooth moves — in some “protest art”? Was Step Up Revolution actually politically motivated?

The Dark Knight Rises‘ parallels to the Occupy Wall Street movement didn’t raise eyebrows. Christopher Nolan’s a serious dude, and his blockbuster superhero movies are supposed to get weighty and politicized. But when Step Up Revolution borrows from OWS, it’s a bit more peculiar. For the most part, the topical shadings in the latest installment of the nation’s reigning dance franchise — in which a dance crew fights a ruthless developer from bulldozing their ungentrified Miami neighborhood — were rejected by reviewers as toothless fluff. But at least one guy took the time to dive deeper into the film’s politics. Writing over at conservative bulwark Breibart.com, critic Ezra Dulas says “advance reviews claimed the film’s protagonists mirrored Occupy with their dance-protest routines against a rich hotel magnate, sending a shiver through the conservative grassroots … Would this sequel be more aptly named in the style of its predecessor, Step Up 2: The Streets, as Step Up 4: The 99%?”

Dulas comes to his own conclusions, and they’re plenty fascinating, even if it feels like the exercise is 99% tongue-in-cheek. But why should that stop us from taking the same deep dive? First, though, let’s all get caught up on the plot. (SPOILERS, except you’ll already see every plot twist coming a mile away.) So there’s a guy named Sean and he leads a team of flash-mobbers (I know, yes, but please keep reading) who are competing in a YouTube competition where 10 million views gets you $100,000. Then Sean meets Emily, an aspiring dancer whose father is Sandy Cohen from The O.C., here playing a high-powered businessman planning on developing Sean and his crew’s neighborhood as condos or hotels or a luxury water park or something. Emily encourages Sean to use the flash mobs for more than just sweet, sweet YouTube gold, and rebel against her dad. (That’s the cue for the “it’s time for protest art” line in the trailer that probably made you gag or crack up or both.) The crew agrees, and, following a series of defeats and confusions that we don’t need to delve into, ends up convincing Sandy Cohen, via the power of epic dance, that their neighborhood has plenty to show for it and therefore shouldn’t become a luxury water park. And then the kicker: One of Sandy Cohen’s business partners shows up right after the climactic dance scene (which, it should be said, probably is awesome enough to warm the heart of even a ruthless rich-guy movie archetype) and offers the crew a deal with Nike advertising, and they accept.

OK, so: On the one hand, dance movies and their ilk have always pitted a crew of underdogs against larger forces. (The South Park episode “Asspen,” where Stan has to defeat a bully in a ski race so that the bully’s dad doesn’t destroy the Aspen Youth Center, lampoons this beautifully.) And no one actually says “Occupy Wall Street” or “We are the 99 Percent” or anything explicitly political about this particular bit of overdevelopment being representative of anything bigger. The plot is indeed rendered in broad, never-endingly goofy strokes. But that’s because it’s a highly effective dance movie, not an out-and-out screed. There are any number of stock plot devices the Step Up people could have utilized to trigger an “underdog dance crew” plotline (see Step Up 1 through 3 for proof). Instead, they purposefully chose to latch onto the OWS stuff. You could argue that this was a business decision, that Summit Entertainment was hoping the aura of topicality would pump the flick with some edge that would play at the box office. I wouldn’t disagree with that. Still, though, it’s in the movie. The good folks at Summit did have the chutzpah to mix it up with some strain or remnant of OWS.

(Discomfortingly, the movie also has an unfortunate, accidental parallel to another news story, the Aurora shooting, thanks to a scene involving gas masks and smoke canisters. After an outcry, Summit decided to keep the scene in the movie.)

Perhaps not as consciously, the movie also brings to mind the fight over the Brooklyn Nets’ Barclays Center, which will be opening in time for this upcoming NBA season. The fight over the development of Atlantic Yards was a multi-million-dollar affair that dominated headlines for years, with the group Develop Don’t Destroy Brooklyn waging a massive grassroots effort to beat back Bruce Ratner’s plans for their hood. Step Up Revolution doesn’t bother to get as complicated. No one mentions “eminent domain.” All complicated legal issues are cleanly excised in favor of one character helpfully explaining that Sandy Cohen can bulldoze over the neighborhood because everybody rents. But when Sandy Cohen decides not to go through with his development, he says something along the lines of, “I’ll find a place to build this where I won’t have to tear everyone else down.” Can Develop Don’t Destroy Brooklyn maybe take some tiny credit, alongside the power of dance, for that particularly worded change of heart?

And that’s when the crew sells out to Nike. And when things get weird. Dulas jumps all over the corporate co-opting, crafting an alternative take on SUR. Check it out:

[A]fter that earth-shaking final dance, a marketing executive approaches Sean and asks him if “The Mob” would sign on for an “edgy” new Nike ad campaign. Sean instantly agrees. What else could this development be but a slap in the face to Adbusters, the very point of inception for Occupy Wall Street?
And thus “Step Up Revolution” finds its ideological redemption. Rather than demanding redistribution of wealth, the protesters of “The Mob” just want their city and their commerce to be left alone. Their rallying cry isn’t “Eat the rich” but “Don’t tread on me.” They learn that free expression, not violence or intimidation, is the solution. And the film serves as a valuable reminder of how fragile and volatile the freedoms offered by the First Amendment can be; “What we do is dangerous,” Sean warns Emily when she first asks to join “The Mob.”

Therefore, Step Up Revolution isn’t leftist Hollywood’s counter to The Dark Knight Rises. In a sense, it’s even more subversive than Nolan’s comparatively boilerplate morality tale. It sets up audience expectations — those 1%-ers will get their comeuppance! — but then shows how capitalism and materialistic excess can coexist with art and tight communal bonds.

Well then! I’m just impressed he managed to pull that off. In a review more representative of the majority opinion, the L.A. Times‘s Mark Olsen wrote, “One perhaps does not expect a fully formed and cogent political platform from a Step Up film, but when a movie puts “Revolution” in the title and engages community action and social justice directly there should be more at the end than simply selling out to the first bidder.” I get that, for sure. But in order to be pissed off about The Mob selling out, you have to have taken their political activism at least a little bit seriously the whole time. It’s more fun when you do. Hopefully for at least some slice of the SUR demographic, the conflicted politics sparked debate. Maybe it’s OK to expect more.

Filed Under: The Dark Knight Rises

See all The Dark Knight Rises