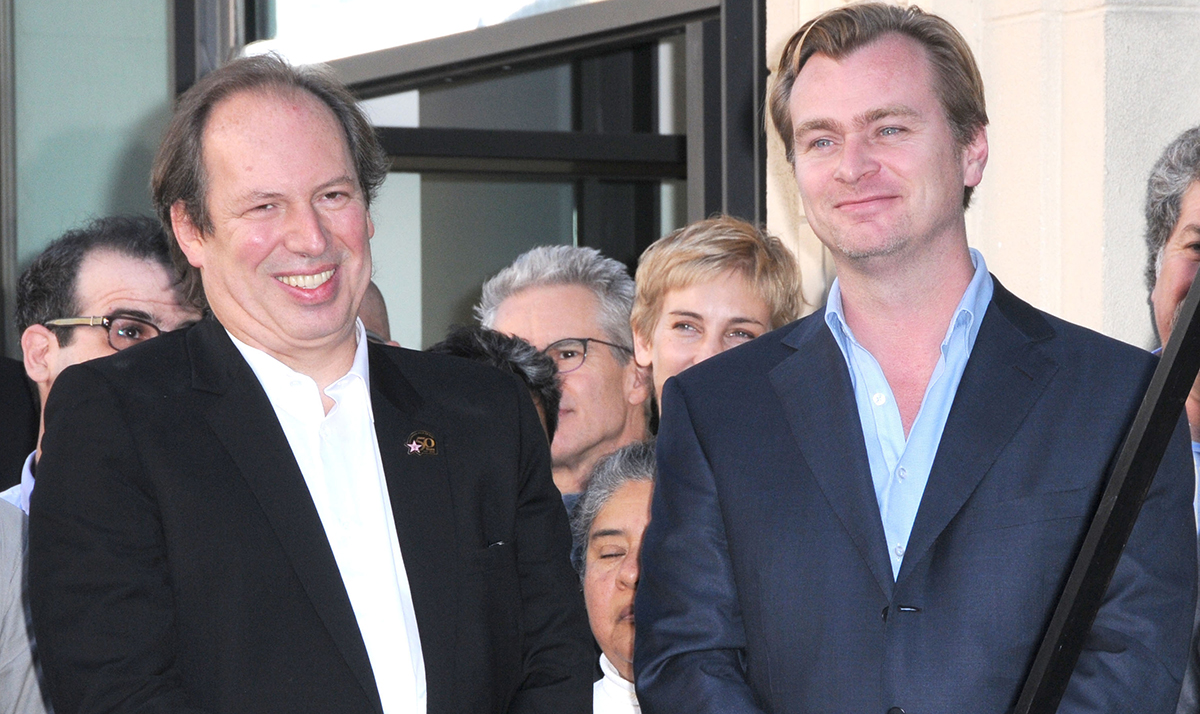 There wasn’t a movie when Christopher Nolan asked the composer Hans Zimmer to compose the music for Interstellar. Before Nolan could direct his space-time odyssey, he had to hear it. More than that: He had to understand his lines, the dialogue his invisible proxy would bellow as Matthew McConaughey confronted mortality at the farthest reaches of the known universe. Though perceptive audiences have often wondered which Nolan characters are the director’s obvious proxies, it’s Zimmer’s commanding scores that speak his voice, show his hand, and make his case. Interstellar needed a beating heart, and Nolan provoked one out of his musical collaborator.

More than a year before filming, Nolan sent Zimmer a letter. Inside was a typewritten note, a melancholy fable about a father and his son. Nolan’s request: Spend 24 hours reacting to the story with music. “I have a son, so Chris knew how to push the right buttons,” Zimmer says of the mysterious preproduction experiment. Zimmer wrote what he describes as “an intimate, musical love letter to my son.” He finished around nine o’clock and rang his director to see if he could send over the composition. Nolan declined. He preferred to drive over and hear it in person.

“He sat on my couch and I played him the piece,” Zimmer says. “He paused for a second and said, ‘I better make the movie now.’”

Rarely do directors find a composer whose music transcends accompaniment to become something more, like the director’s musical hand at play. It’s not manipulation, it’s artistic synchresis, wherein an auteur’s vision and sound become inseparable. The mouth-agape wonder of Steven Spielberg and John Williams, Alfred Hitchcock and Bernard Herrmann’s melodious paranoia, the swinging rhythm of a Blake Edwards–Henry Mancini picture, Tim Burton and Danny Elfman’s fanciful macabre — those scores play in the background, even in still frames. When the films fell short, the sound, picture, and drama failed in tune.

Alone, Nolan and Zimmer ask the same questions and seek the same answers. Both men are fascinated with logistics, time, and the physical potential of music. They see the world through a macro lens. Many of Zimmer’s scores reject themes tied to characters or emotional motifs. He blows up musical ideas to cover an entire world. In The Last Samurai, it’s the musical equivalent of a warrior’s philosophy. Thelma & Louise embodies a rebellious spirit. The Da Vinci Code unravels 2,000 years of Christianity. Even the simplistic score behind Nancy Meyers’s Something’s Gotta Give mirrors a lifestyle more than a person living a life. Likewise, Nolan’s films expand beyond their central figures. They can’t exist without scope. His work with Zimmer becomes more than finding the right bombast for a Batman fistfight or a race alongside Inception’s runaway train. The score is where Nolan declares his intentions.

The scores for Nolan’s pre-Zimmer films … function. Composer David Julyan — who became increasingly more interesting after his days with the director — replicates the modern thriller score for Nolan’s debut, Following, and his procedural Insomnia. Memento blurs and floats along like film-appropriate Brian Eno or William Basinski. Batman Begins turned Nolan into a born-again Zimmerite. When Julyan returned to work with the director on The Prestige, Nolan stepped into an official executive music producer role.

After he heard the piano melody that Zimmer had written for Interstellar, Nolan opened up to the composer about his intentions. He spoke to Zimmer about space’s empty vastness and the entire history of science fiction that man has used to grapple with it. “There’s an inherent nostalgia to [sci-fi films],” Zimmer says. “The bigger they get the more personal they get. We’re looking at what our place or role in this world is.” Their conversation snowballed until it reached maximum ambition. “We thought of how much film or literature, in the last 20 or 30 years, has turned inward. We’re getting more psychological, looking inward instead of looking outward, upward. It felt like an opportunity to look up.”

There’s a Nolan-Zimmer timbre that began in 2005’s Batman Begins and crescendos with 2012’s chant-filled score for The Dark Knight Rises. Thunderous drums smash together with blaring horns, propelled by a string section trying to saw their violins in half. For a classicist like Nolan, a guy who can’t walk into a room without mentioning Stanley Kubrick or David Lean, it’s an odd choice. Zimmer’s affection for Sergio Leone’s Once Upon a Time in the West resolves it. Ennio Morricone’s score, distorted guitar and harmonica juxtaposed against French horns and strings, roared through the German composer’s brain as a kid. “I had never seen a big movie. The sheer audacity of the scale of its shots and the close-ups, the incredibly mournful and crazy music.” Zimmer uses “audacity” to describe Nolan. The director may dream of the days when epic dramas had overtures, Zimmer may cling to his prog-rock roots, but they find common ground in blowing out ear drums. They want movies to be felt.

Convention gnaws at Nolan and Zimmer. They’re kindred spirits because they hate what Hollywood tells them to do. The director reinvented the Batman franchise because he wanted to reject blockbuster standards, and in turn established the term “Nolanesque” as the accepted neologism for “dark and gritty.” Zimmer takes pride in a cue like “Why So Serious?” from The Dark Knight (often referred to as “Joker’s Theme,” a sweeping, musical personification of chaos) for its grating qualities. It’s what you’re not supposed to do in film scoring.

With Interstellar, challenging the norm meant rejecting an action-filmmaking culture they’d warped 10 years ago. No drums, no accelerating tempos, no Inception “BRONG.” Homing in on the melody, the two considered the endlessness of space-time and found themselves working on a medieval scale. “If you want to push the future, you show the distance between the past and where we’re heading,” Zimmer says.

Nolan suggested a church organ, and Zimmer seized on it. Not only was it the right sound for their heavenly venture, but the pipes of a church organ just happen to resemble a rocket ship. Not to mention the instrument’s unique backstory — which Zimmer can’t help but launch into. “It was the 17th century and it stayed the most technological thing that mankind had ever created until the telephone. I loved the idea of using something where science had been put into the service of art. All these guys were trying to do was build something that made a fantastic noise.”

Nolan’s movies are about mechanics. How does Bruce Wayne really become Batman? How does the dream machine work? How does a space shuttle dock into a larger space shuttle? He and Zimmer share that same inquisitive passion when it comes to music. The composer is a computer whiz, synthesizers and computer filters playing as essential to his sonic tapestries as anything a human can do with a tuba. He devours facts and how they can be applied to his work. When it came to Interstellar’s music, it’s Nolan’s passion for science that fuels his work. “I know more about the mathematician Roger Penrose [now] than had I not done either Inception or Interstellar,” Zimmer says. “I’m getting quite good at quantum physics these days.”

And while Nolan may not be a put-on-a-record-and-soak-it-all-up kind of guy, he has an ear for tonality. Zimmer says his director has a phonographic memory. “He has the most amazing memory for sound and music. He can tell from a performance three years ago if I shifted the slightest thing. He can tell you what note it was.” That ear allows Zimmer to talk about, play, and botch more musical ideas in front of Nolan than any other director. He admits it’s too strong a word, but he calls Nolan his least “dictatorial” collaborator. “The only way I can put it is he’s in my band. I’m in his band,” he says. And Nolan’s always ready to jam. They did more than 45 scoring sessions for Interstellar, three times as many as Inception.

Judging from their work, neither man is all that interested in life’s sweeter emotions. Zimmer (and, in turn, Nolan) speak with masculine bravado. Baritones and bass sounds march through their scenes. If there’s a soprano voice present, it’s often alone and frail. For Batman Begins, he recruited fellow composer James Newton Howard to cowrite the score. He later explained the move to Empire as needing someone to tackle the “lovey-dovey” material. “In the context of that, there was such a schizophrenic soul between Bruce Wayne and the Dark Knight, the only way to do justice to it was to become one and not the other,” Zimmer says. “Of course I picked the dark side. It’s territory I’m very happy in.”

Interstellar is a pure Nolan drama, and its haunting score is recognizably Zimmer. They’re grand minimalists. Like an amalgam of Bach and Goblin, Zimmer leans heavily on ostinato, a drilling repetition that fits Nolan’s structuralism. Stars align when Zimmer pounds away behind Bruce Wayne climbing barehanded from Bane’s pit, Cobb descending deeper and deeper into the dreamworld, or McConaughey’s Cooper untethering from known reality to find a fractalizing great beyond. The Nolan-Zimmer collaboration is like the chicken and the egg. It doesn’t matter who got there first — their creations wouldn’t exist without the other.

That scrap of melody that Zimmer first wrote for Nolan can be heard in Interstellar. When it fades completely to black, the sounds of his piano playing can be faintly heard. “In typical Chris fashion, the first thing I did is the last thing you hear,” Zimmer says. “I remember at one of the recording sessions, I said, ‘I’ve listened to this piece now so many times over the last two years.’ Chris looked at me and said, ‘You have no idea how many times I’ve listened to it.’”