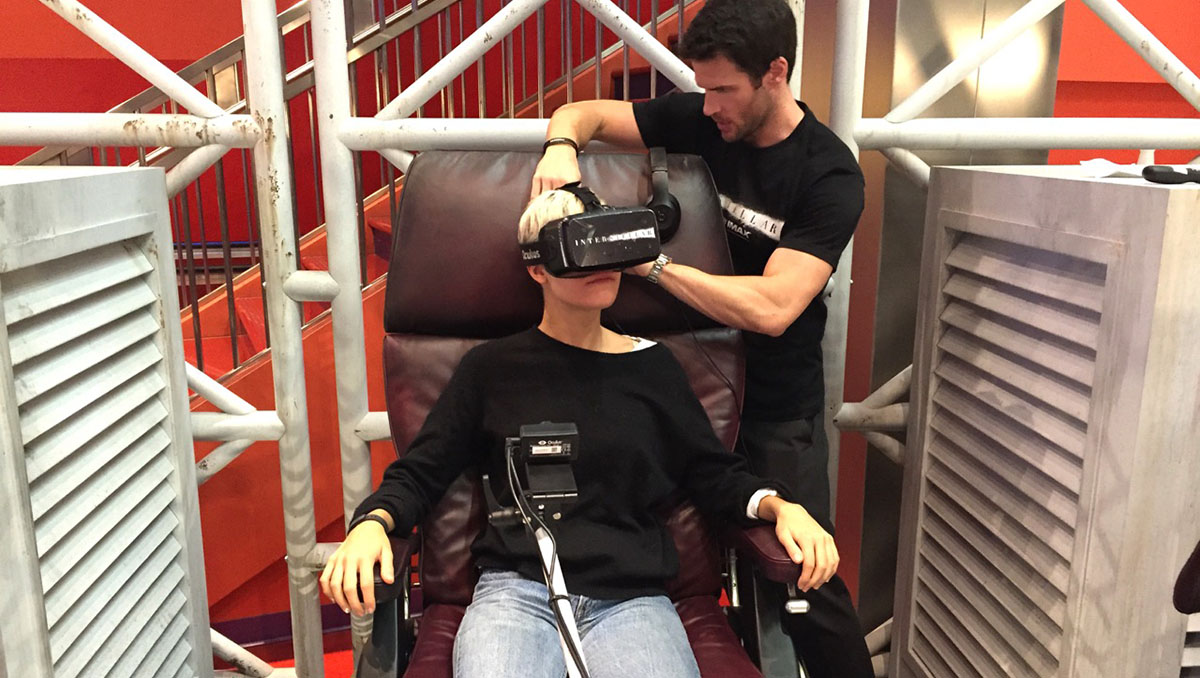 It’s 9:29 on a Monday night at Universal CityWalk in Los Angeles. I’m standing in line in a movie theater lobby, waiting to experience a virtual-reality rendering of the interior of a fictional spaceship from a movie I have not yet seen, Interstellar.

A quick aside for those readers unfamiliar with Universal CityWalk: It is a shopping plaza dressed up as a Los Angeles cityscape that has never existed, home to businesses with uncanny mirror-world names like “Jon Lovitz Comedy Club” and “The Los Angeles Sock Market.” Between an arcade and a store dedicated entirely to Oakland Raiders gear (“The Raider Image”), one can leap, hamster-suited, into a wind tunnel and experience 45 seconds of simulated sky-diving for $59.95. Nearby, one can slip, squirming, into a plastic body suit to be pummeled by jets of water at a store called “Zen Zone.” And at Universal Studios Hollywood proper, only a few hundred yards beyond the gates, one can ride rides and — for the occasion of Halloween — be stalked by zombies. 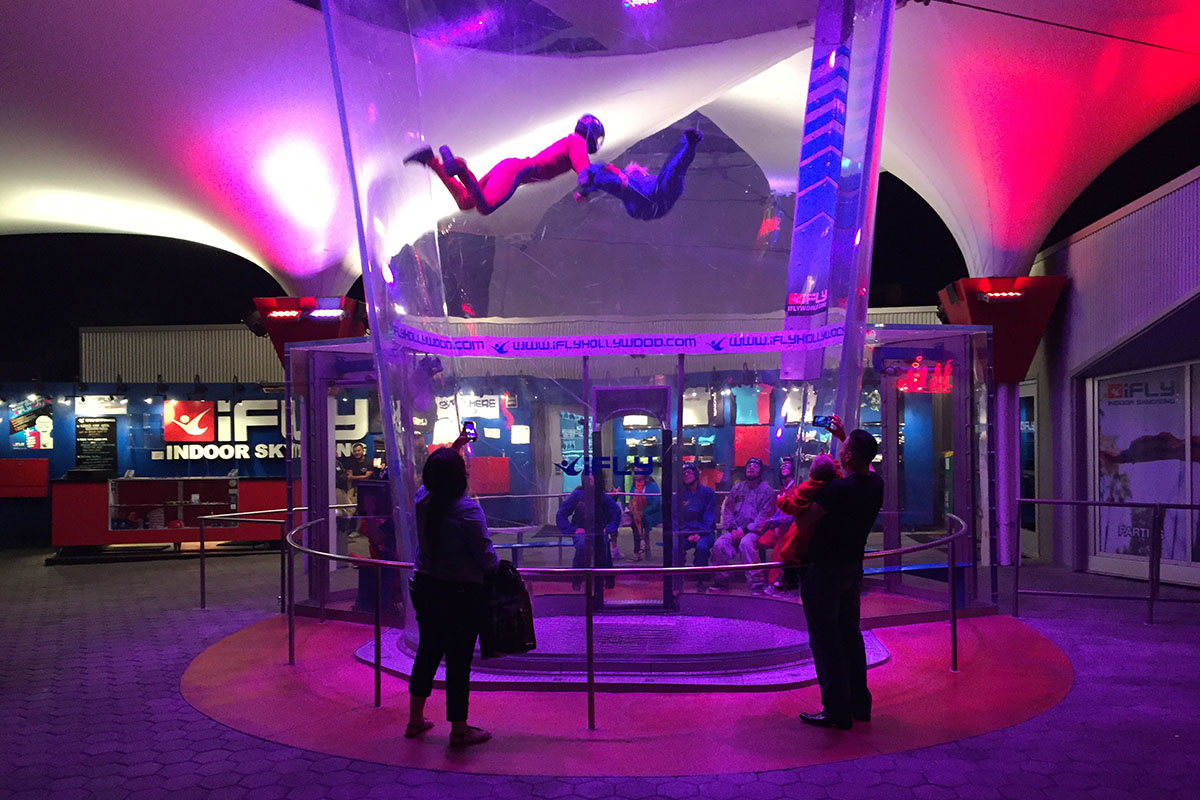 This is to say that experiences at Universal CityWalk in Los Angeles are so numerous, diverse, and price-jacked that when I mentioned to the parking attendant that I was headed for the Interstellar Oculus Rift 4D experience, he huffed a knowing huff and said, “Well, can’t beat the price.”

So let me rephrase: It’s Monday night at Universal CityWalk and I’m waiting in line to experience — for free — the interior of a fictional spaceship from Interstellar, a movie I have not yet seen. Behind me in this line is a young man taking great pleasure in his knowledge of a cipher for decoding Christopher Nolan’s last non-Batman blockbuster, Inception, that his friends do not know. “It’s pretty hard to spot,” he gloats. “But I spotted it.” In front of me in line is a couple discussing the recent landing of the Air Force’s X-37B space plane after nearly two mysterious years in orbit. Are these my people?

Universal CityWalk is best appreciated, presumably, during the opening uptick of a stupendous high. Disembodied music floats through palm trees strung with lights, through interactive fountains hurling rods of water in the air, through Wolfgang Puck’s and Wetzel’s Pretzels. It is so unlike real life here — so insufferably alien in its appropriation of once-familiar brands and landmarks — that when I was an undergraduate, a particularly clever media studies professor sent my class to Universal CityWalk immediately after we finished Jean Baudrillard’s Simulacra and Simulation. I still remember how I felt then. Dual, cresting waves of awe and dread; the beauty that is terror we are just able to endure, as Rilke wrote. Then I went bowling.

Everything alien can be made normal in time. Oculus Rift, for example, the virtual-reality headset whose maker was purchased by Facebook earlier this year for $2 billion: The first time you strap an Oculus Rift to your head is marvelous. Jetpack notwithstanding, it is your childhood fantasy of the future finally come to fruition. You crane your neck back and forth, woozy, giggling, grabbing like a baby at floating objects. The Oculus Rift never really loses this fundamentally magic quality, but repeated use reveals its true nature, beyond novelty, as a workhorse tool for scoping out renderings of digital space.

Which makes it particularly suited for marketing “experiences” of this nature — simulated immersions into commercial franchises. At Universal Studios Hollywood, Transformers: The Ride — in which 60-foot screens projecting 3-D images of Autobots and Decepticons tower over a 2,000-foot-long dark ride track, and which cost $100 million to build — will likely be made obsolete by a few more years’ development in VR technologies. We will be seeing more of this. 4-D trumps 3-D, and takes up a lot less room.

And if Facebook has its way, we’ll soon be scooting around our social networks in Oculus-enabled 4-D dérives. We will float seamlessly from engagement to impression on threadlike clouds of information brought to us by Vitaminwater, or Doritos, or whatever Christopher Nolan movie is currently in theaters. Like Universal CityWalk, a simulacra of a Los Angeles that was never there, or the inside of a spaceship informed by a parade of previous spaceship designs from throughout the history of cinema, the truth won’t be concealed from us — the truth, as Baudrillard writes, “conceals that there is none.”

People who know their way around an Oculus Rift development kit 1 have a certain economy of motion. They know how to make the experience effective. Sit up straight. Look around. Rule no. 1, though: Don’t look down at where your body should be. It isn’t there. Inside the headset, “you” is reduced to a set of eyeballs, a point of sentience in a generated world. 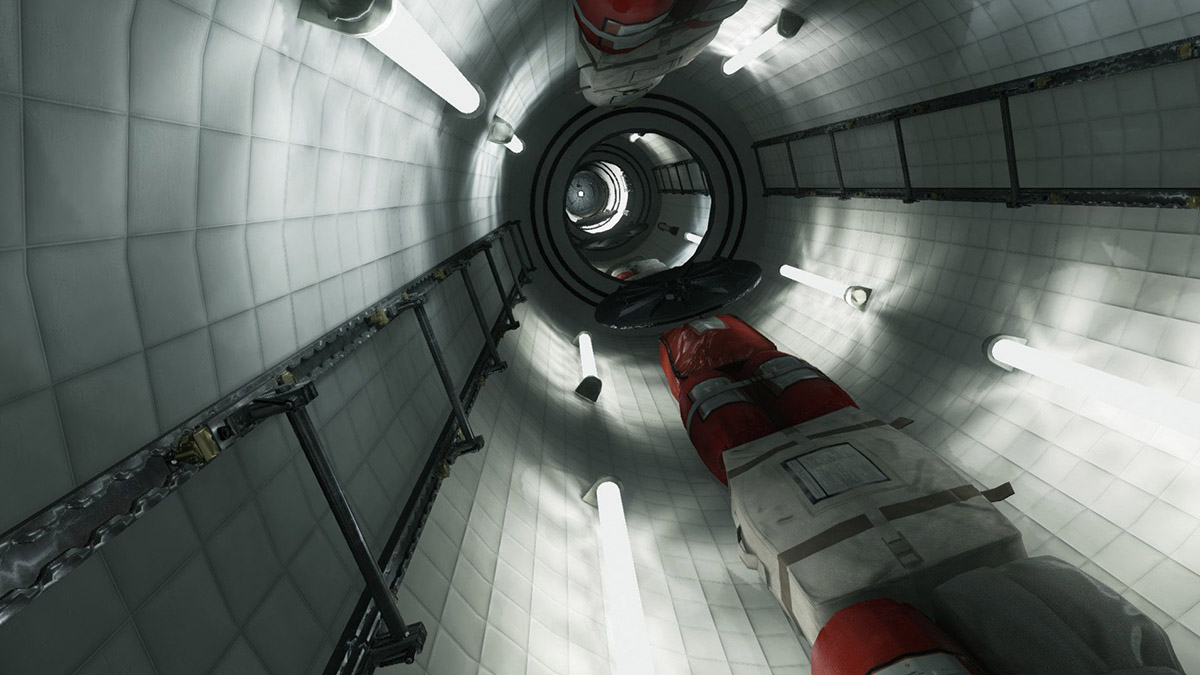 This is disconcerting, to say the least. The narrative of the Interstellar Oculus Rift experience, designed to move you through a fully mapped version of the film’s spacecraft, has your disembodied point of sentience floating in zero-gravity through expertly patinated bulkheads, past windows revealing wide and mysterious planets, around pens and flashlights floating in the air, until you reach a seat at the controls of the ship. A disembodied voice warns you to move quickly (which you have no control over), but also counsels you to look around, which you do, peering around corners and behind you at the blinking, receding planes of the ship, trying to absorb as much visual information as possible. Things twiddle and beep in shades of blue and gray. Nausea is an issue — more so for women than men, or so it has been reported — but the experience is graciously brief: three minutes of action, as precisely timed as any Universal Studios dark ride.

Do you meet a computer-generated Matthew McConaughey, slumped and existential as he might be behind the wheel of a Lincoln, once you reach the cockpit? No, sadly, you do not. You are alone. Perhaps the rest of the crew has perished on the soil of an alien planet, and their responsibilities have befallen you. In films, as in the history of space travel, there is always someone left behind on the ship to man the controls. That person trades the risk and glory of extravehicular exploration for the burden of bringing everyone back home safely. That person is, apparently, you.

As I look down, I notice a joystick protruding from the seat, suspiciously positioned between where my legs should be. But no sooner than I have the chance to delight in my virtual-reality phallus, the seat begins to shudder, and in a moment of technological jouissance, my vision is obliterated by the white wormhole of warp-speed. A swell of Hans Zimmer strings. Movie logo. The hands of a movie theater employee peeling the headphones from my ears. Ten on a Monday night. Back to reality.