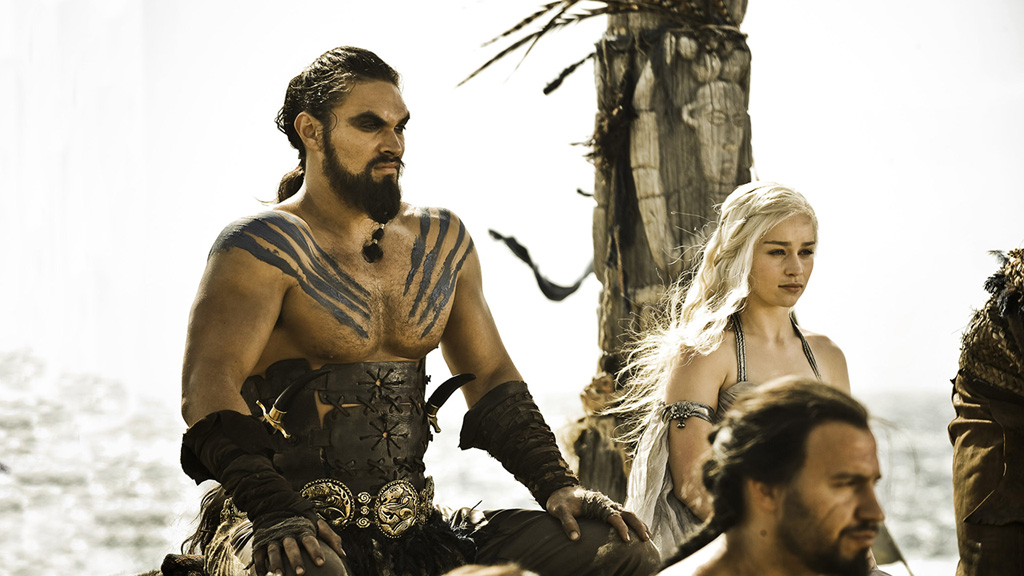 It’s been an eventful week in fictional worlds! In “the Internet continues to ruin everything you hold dear while simultaneously serving as an irreplaceable part of your quotidian existence” news, set photos from the upcoming season of Game of Thrones leaked on numerous websites, spoiling plot points and driving the book-centric crowd into near-hysterics over changes from the novels’ continuity. In truth, those changes do seem pretty consequential. I’d link, but I want to disavow all responsibility for ruining the story for people. Google exists if you’re that curious.

And in “this isn’t the book you’re looking for” news, George R.R. Martin unveiled his coffee-table concordance of A Song of Ice and Fire miscellany, cowritten with Westeros.org webmasters Elio Garcia and Linda Antonsson, The World of Ice & Fire. It’s truly a maester’s dream reference tome, but not recommended for anyone who hasn’t read the books. (I mean like the prequel novellas and everything.)

Anything worthy of distracting you from life’s inexorable shuffle toward the grave is worth falling into like Alice into the rabbit hole. And so, last week, I managed to get David J. Peterson, the truly brilliant developer of several fake languages, including High Valyrian and Dothraki, to discuss over email, in boring conversational English, his love of languages, conlanging techniques, and Queensrÿche.

What’s your background? How did you first begin conlanging?

I started creating languages my freshman year in college at UC Berkeley. I was taking a bunch of languages classes (at the time, Arabic, Russian, and Esperanto), and I also was taking my first linguistics class. This served as the inspiration for creating my first language, which was atrocious. Some months later, I hooked into the online conlanging community and began my education as a conlanger. That was back in 2000, and I’ve been conlanging ever since.

In terms of the grammatical structure, I’ve noticed with some relief that Dothraki is not as complicated in terms of verb conjugation as perhaps I was expecting. Maybe that’s just because I’m such a beginner. What was your structural inspiration for the language?

No, Dothraki verbs are not difficult. They’re more complicated than English verbs morphologically, but simpler than many European verb systems. The complexity in using Dothraki verbs comes in their combinations with object nouns in different case forms to produce different senses. The system itself was evolved from a simpler aspectual system. For this, I wanted to have a verb system I could learn easily without having to constantly reference the grammar (this is something I have to do with High Valyrian and Irathient from Defiance), because translating into Dothraki for Game of Thrones was my first professional conlanging job, and I had a lot to learn about what that meant. For me, noun complexity (cases, etc.) is simple; verb complexity is tough. I took it easy on myself with the verbs for Dothraki and had more fun with the nouns.

Do you take into account the fictional culture, societal structure, etc., when building the vocabulary?

Yes, this is a prerequisite to doing a good job. Creating words isn’t a simple matter of making a form for whatever one pulls out of the dictionary. The word has to fit the fictional context or it’ll just end up being a hodgepodge. Even modern languages that have vocabulary for everything under the sun still have a core set that comes to us from the distant past of the language and its speakers. The conlanger has to emulate that evolutionary history to produce something unique.

Could you expand on your process in building the language from its society’s fictional evolutionary history? I find this part of it fascinating.

Languages undergo three major types of evolution: phonological evolution, grammatical evolution, and lexical evolution. Being able to evolve a created language entails manipulating each of those three processes. Starting with a proto-language, I evolve the sound system, which often has consequences on the grammar. Grammatical evolution is a bit of a different process, and involves the loss of old grammatical forms and the creation of new forms from older lexical material. (For example, person marking on verbs often derives from old pronouns, which themselves ultimately derive from different types of nouns or demonstratives.) Semantic evolution is a bit more straightforward. Words change meaning all the time (we can see this happen in our lifetimes with slang), and so the goal is to plausibly evolve the present crop of words out of the old crop.

Any particular favorite words or expressions in Dothraki thus far?

I like verven — “violent,” derived from ver, “wolf.” (It’s kind of “wolfishness,” I guess.) It sounds pretty cool to me.

Switching from fake languages to prog-metal concept albums, I noticed that your screen name is a reference to a Queensrÿche song. It’s been several decades now, and I’m still not sure who killed Mary in Operation: Mindcrime. Your theory?

It hasn’t been several decades since Operation: Mindcrime II, though! Even so, I always assumed it was Nikki. It makes sense, given his generally weak and disreputable nature, that he would be the one to engineer his greatest tragedy. But, man, realistically it would be soooo easy to for someone else to have done it and pinned it on him — literally anybody. They could probably leave their fingerprints all over the gun and leave a signed note and Nikki would still get the blame, because he’s a total zero: drug-addicted, violent hit man who’s mentally unbalanced.

That said, my favorite Queensrÿche albums are Rage for Order, Promised Land, The Warning, and the Queensrÿche EP; Empire and Mindcrime are in the tier below that (and everything else, below that). Those first three Queensrÿche albums and the wildly different but incredible Promised Land sit very close to my heart. I’d be hard-pressed to leave any one of those behind if I could only take one with me to a desert island. Well, the EP, probably, since it has fewer songs, but, man, I’d miss “Prophecy.”

Words of the Week

Let’s do some pronouns since it’s nigh-impossible to express yourself in any language without them.

Anha. “I.” Example: Anha lajak. “I am a warrior.” (I predict that this phrase will be the next-level GoT nerd tattoo in the years to come.)

Yer. “You.” Example: Yer zheanalat. “You are beautiful.” (There’s some verb conjugation going on with this one and any verb/adjective ending with at; I’ll get to that next time. You know, when I actually feel like I kind of know what I’m doing.)

Me. “He/she/it.” Pronounced like “meh,” but shorter and more staccato. Example: Me haja. “He/she/it is strong.”

Yeri. “You” (familiar plural — in other words, use yeri when talking to your friends, not your khal). Example: Yeri zhokwalat. “You (plural) are big.” (Obviously multiple uses for this one.)

Until next time, fonas chek.1