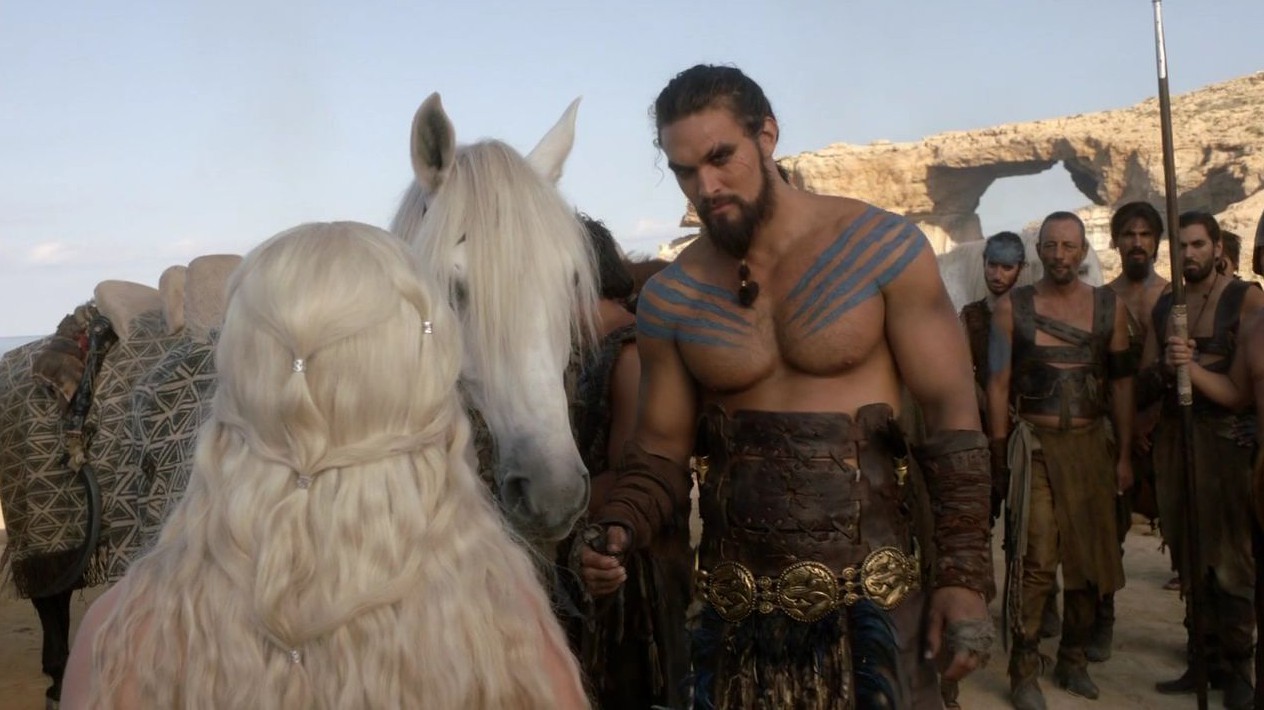 Here’s Jason Momoa, doing a traditional Maori haka dance for his audition for the part of Khal Drogo in Season 1 of Game of Thrones. My initial reaction to this video is: Jason Momoa’s grunts are more manly and virile than any other human-emitted sound I can remember hearing. They’re more like a water buffalo clearing its nasal passages as it prepares to gore poor Francis Macomber out on the savannah. Also, it looks as if Mr. Momoa got slathered in that cream and clear between his audition and the beginning of filming, because pre-Drogo Momoa is almost distractingly lithe compared with the savage, sunbaked, slab-o’-beef version from the show. 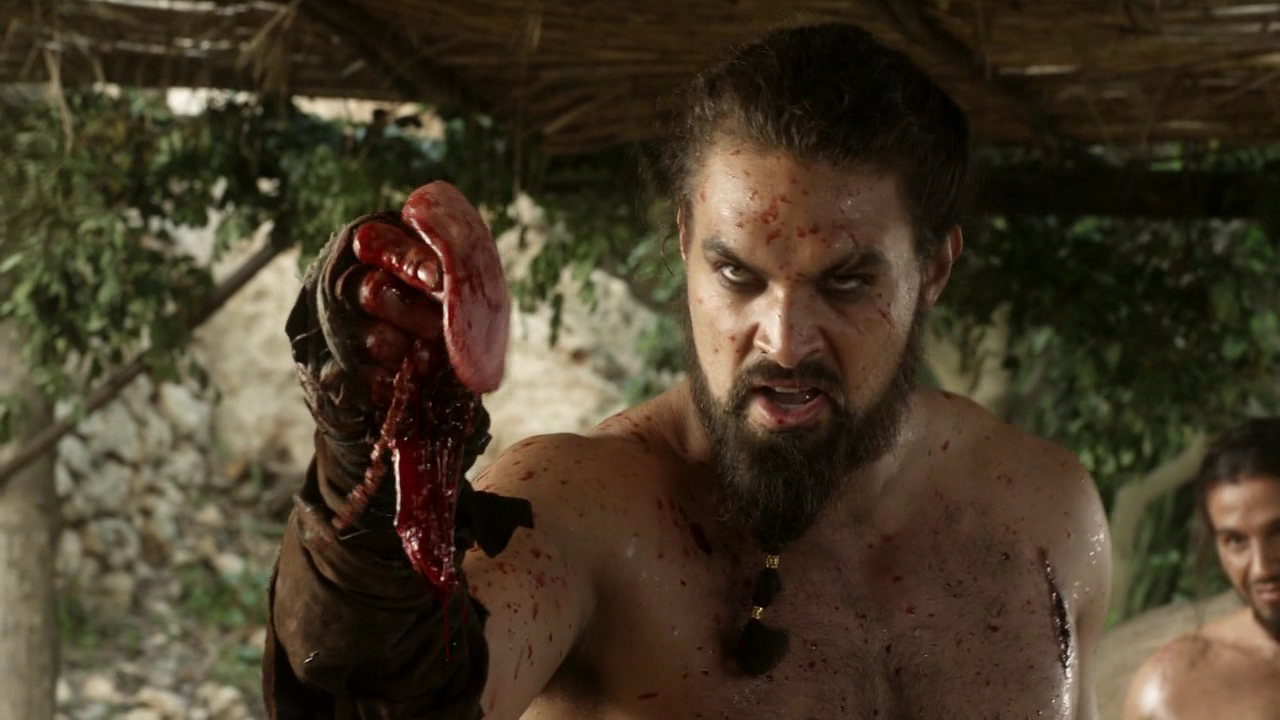 As it turned out, the foot-stomping warrior swagger of the haka was an inspired choice. Momoa would inject that feeling into one of his signature scenes from Season 1, Drogo dealing with the upstart ko (“bodyguard”) Mago by tearing a ragged hole in the latter’s trachea and pulling out his lekh (“tongue”). The violence is preceded by Drogo ostentatiously dodging Mago’s arakh slashes, then pulling his own daggers from his sash and cockily dropping them to the ground. All the while, his voice grows from a rumble to a roar, as he announces what he intends to do to Mago.

I’ve been going back through these Drogo clips to try to get a sense of the rhythm and inflection of the Dothraki language in its native setting. As anyone who has ever tried to learn a language, even a real one, can tell you: Sound clips can take you only so far. It’s the difference between seeing a butterfly pinned under glass and seeing one flit unpredictably to and fro in the wild. Also, I just wanted to see how closely the Dothraki scenes from Thrones hew to the words and simple phrases I’m learning. Answer: really closely!

Most surprising is the (unintentional?) “realism” of Daenerys’s Dothraki pronunciation. I picked out anha Khaleesi (“I am Khaleesi”) from the Drogo-Mago clip, and I’m pretty sure Dany adds an extra syllable to anha (“I am”) and kinda mangles the kh sound in Khaleesi, pronouncing it more as an h instead of using the throat-clearing sound or the nonnative hard k. In the Season 2 finale, when Dany is reunited with Drogo during her visions in the House of the Undying, she says, “Ishish addrivat,” which is translated in the subtitles as “Maybe I am dead.” With roughly two weeks of Dothraki study under my belt, I am relatively certain that, in this scene, Dany mispronounces the Dothraki word ishish (“maybe”) and, furthermore, I’m pretty sure that, at least literally, what she is saying is “maybe kill” instead of “maybe I am dead.” All of which makes sense, as Dothraki is her second fictional language after High Valyrian.

Momoa’s Drogo, on the other hand, sounds fluid. His pronunciation and inflection are right out of the lessons. In Dothraki, words that end in consonants have an emphasis put on the final syllable and words that end in vowels have the emphasis placed on the first syllable. Thus lajak (“warrior”) should be pronounced la-JAK and Khaleesi should be KHA-lee-si. Drogo nails this. I firmly believe that, as the Dothraki language spreads among hard-core A Song of Ice and Fire/Game of Thrones nerds, grunting greetings at each other while bedecked in head-to-toe khalasar cosplay outfits at Dragon Con or whichever Comic-Con or whatever other future fantasy-nerd gathering they happen to attend, Jason Momoa’s weirdly natural grasp of Dothraki will eventually get the attention it deserves. This bodes well for the upcoming Aquaman movie, in which I predict we’ll see Momoa conversing with dolphins using perfectly enunciated clicks and buzzes.

Last weekend, feeling that I needed another tool in my quest to master this youngest, most nobly savage of the fantasy languages, I downloaded a Dothraki language app to my phone. The hope was that it would be like a Pimsleur kind of thing that would let me listen to some Drogo knockoff pronounce words in Dothraki and English while I walked my dog. The app doesn’t quite correspond to the lesson structure of the Dothraki course on Living Language, but it does have a useful games feature, in which the novice can match Dothraki words with their English equivalents, and a sentence builder function. I’ve got the word matching for this early stage pretty much down. Certain words are easy, due to the books, such as vaes (“city”) and krazaaj (“mountain”). For the rest, I’m using crude mnemonic devices and running the flash-card drills on my laptop.

I’m still at the “memorize words” stage, which is pretty annoying. My hope is to have enough of a grasp of basic greetings and a few simple phrases to be able to speak the mother tongue to the natives when I see George R.R. Martin’s talk at the 92nd Street Y in Manhattan this Sunday. I really want to have the early lessons down cold, because grammar, sentence structure, and — my own personal language nemesis — verb conjugation come up next. I hate verb conjugation. My feelings about verb conjugation can be summed up by a passage from Mark Twain’s essay “The Awful German Language”:

Surely there is not another language that is so slipshod and systemless, and so slippery and elusive to the grasp. One is washed about in it, hither and thither, in the most helpless way; and when at last he thinks he has captured a rule which offers firm ground to take a rest on amid the general rage and turmoil of the ten parts of speech, he turns over the page and reads, “Let the pupil make careful note of the following exceptions.”

I mean, I barely have a grasp of the English language.

As I slogged along, muttering, “Hash yer dothrea check?” (“how are you?” — literally “do you ride well?”) and the like to myself like a halfway insane person, my spirits were lifted when the architect of Dothraki himself, David J. Peterson, tweeted his support for last week’s column. What a thrill!

Word of the Week

Khefat. “To sneeze.” Remember, the kh sound gets that sound like you’re hawking up phlegm if you’re trying for the “native speaker” inflection. My mnemonic for this word is just that it legit sounds like a sneeze if you say it fast enough. Not the most useful fake word, but one of the easiest to remember thus far.

Phrases of the Week

The clip of Daenerys and ghost Drogo, reunited in the trippy-ass House of the Undying, really got to me. Actual, honest-to-goodness, requited physical and emotional love is not something Game of Thrones gives its fans all that often, and when it does, the end result is usually the death of one or both parties and probably a whole bunch of other people who knew them. Sure, Dany and Drogo’s love started as a rather brutal arranged-wedding scenario, and included Drogo murdering Dany’s brother by pouring molten gold on his head — but that’s shooting under par in the context of Game of Thrones relationships. So, with Dany and Drogo in mind, let’s get romantic.2

Yer zheanae. “You’re beautiful.” This will be the go-to pickup line at ASoIaF meet-ups and conventions for wannabe Dothraki with no self-awareness and multiple restraining orders. Remember to roll the r in yer and pronounce the vowels at the end of zheanae (zhee-ah-nay — imagine Forrest Gump saying, “Jenny”) individually, you creeps.

Yer jalan atthirari anni. To a woman: “You are the moon of my life.” Daaaaaaaaaaaaw. Momoa’s pronunciation of this is something to aspire to. OK, so, doubled letters in Dothraki get pronounced individually. With vowels, this is pretty easy in practice. I’ve found pronouncing doubled consonants to be a trickier proposition. This is important because doubled consonants can change the meaning of a word. The Living Language tip says to think of how the word “misspent” is pronounced. That kind of helped. More than anything, what I’ve gotten from watching Drogo videos on YouTube is that the most consistent way, for me, to get the doubled-consonants sound is to kind of sustain the given consonant for an extra beat. So anni sounds like ahn-nn-ee instead of ahn-ee. Same goes for the tth in atthirari (“my life”) — hold that th sound. If that makes sense.

Yer shekh ma shieraki anni. To a man: “You are my sun and stars.”