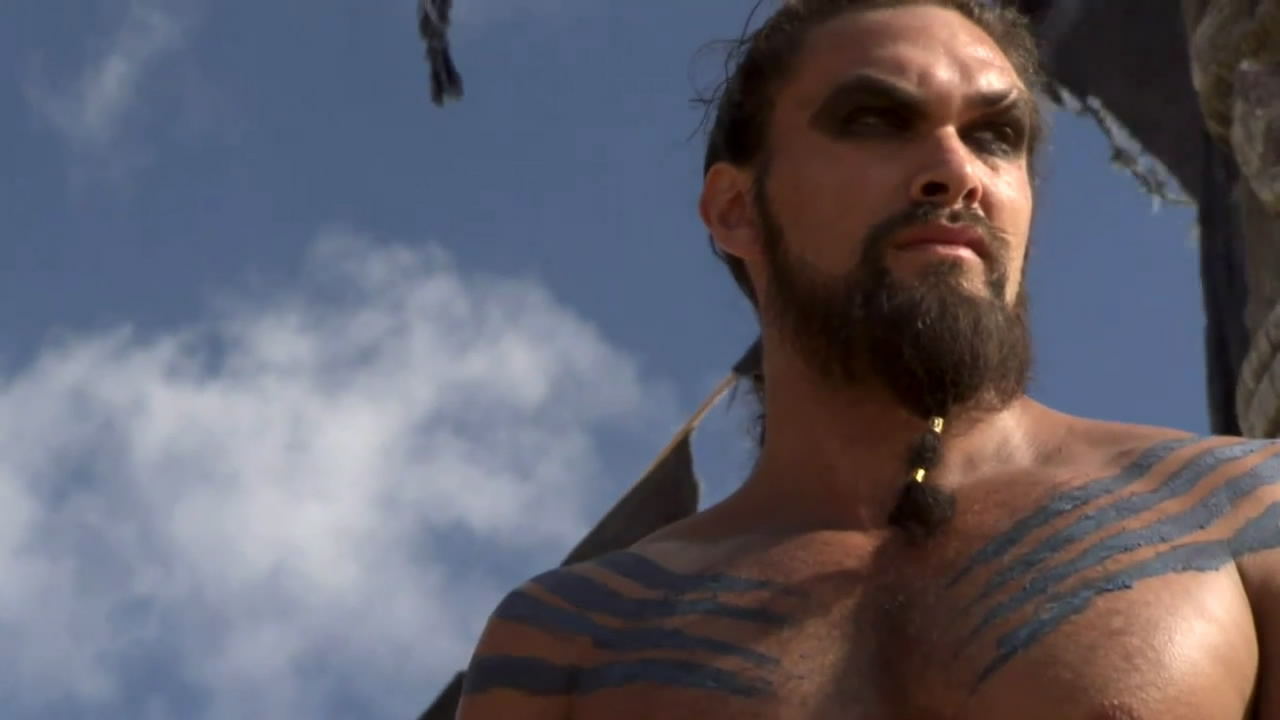 M’atchamaroon, Dothraki. Anha zalat yer adhaka zhokwa zir ma yeri rhojosori.1 In the time since last we last astola lekh Dothraki, I’ve been prepping for my reread of A Feast for Crows ahead of Season 5, absorbing the steady drip of #Thrones-branded bric-a-brac and spoilery production gossip, and also trying to live a life that doesn’t resemble that of a vampire shut-in. It has not been easy. All the while, I’ve been thinking about the singular question we must ask of any story in the post-Lost everything’s-a-puzzle-box world: How does it end?

But first, let’s catch up on that bric-a-brac.

The first teaser trailer from the upcoming Season 5 of Game of Thrones dropped Thanksgiving week. It features quick cuts of everyone’s favorite teen killer, Arya Stark, all relating to her journey to Braavos, where she will most likely learn the ways of the mysterious assassin cult known as the Faceless Men. We see Arya awake from a dream. The trailer then presents, in flashback style, quick cuts of Arya-centric scenes from Season 4: Arya giving the ship’s captain the mysterious coin from season finale “The Children,” and Arya stabbing a dude in the chest from the season premiere, “Two Swords.” The only definitely new footage is the very last shot, of a set of heavy doors — presumably Arya’s destination. Not much to go on, but, for what it’s worth, Pau Gasol is pretty excited.

The trailer is mainly a vehicle for driving fans to ThreeEyedRaven.com, which will probably end up being some kind of marketing ARG for Season 5. On the upside, I apparently now have the greensight.

HBO announced an upcoming book project titled Game of Thrones: Compendium. The Compendium is apparently a collection of fan-created stuff — in the form of original artwork, crafts, poetry, maps, what have you — that fleshes out the world of the TV series.

The project’s website describes the Compendium as “the world’s first collaborative, crowd-sourced compendium. The end result will be a printed and bound edition. Every entry chosen for inclusion in the printed book will receive a copy with their name listed as an author.”

Fans can submit original works based on people, places, and events from Seasons 1-4 to the website, at which point a “Council of Editors” — including, among others, Jeopardy! champion Arthur Chu, famous owner of restaurants Tom Colicchio, and Marie Claire creative director Nina Garcia — will choose which submissions are worthy of inclusion in the book.

From the fan side, this seems like a pretty cool thing for GoT enthusiasts to be involved in. You, too, can be a published author! From the HBO side, this is pretty much a shameless free-content pyramid scheme. Crowdsource the content to then sell back to the crowd! Genius! You don’t get to keep the rights to your original work.

OK, so, I’ve been thinking about how A Song of Ice and Fire and Game of Thrones eventually end, and how, since Lost, there’s this tremendous peer pressure in the pop culture zeitgeist for creators to really stick their landings. We want creators to write endings that not only tie up the necessary number of dangling plot threads and clear up persistent mysteries, but that also provide an emotionally satisfying conclusion for the characters with which the audience has spent all those hours. That pressure to close is certainly one that George R.R. Martin is aware of, and he’s given interviews in which he names Lost as the prime example of what not to do.

With the atomic level of attention to detail paid the story by its millions of fans, the hyper-theorizing that takes place on the various Internet places, and the idiot nerd writers learning the fictional language of a tertiary ethnic group from the world’s second-most important continent, it’s easy to feel like every possible ending has been covered in some forum thread somewhere. Sticking the landing, and sticking it in a way that is an actual surprise, seems like an almost impossible proposition.

In a sense, Martin’s creative process and the genre his story takes place in work against each other. We expect climactic battles, medals pinned to chests, and tidy endings from our fantasy and sci-fi. But Martin takes his inspiration from history, and history doesn’t end, much less end tidily. In A Song of Ice and Fire, Martin seems less interested in endings than in exploring what his characters do after them. Robert Baratheon asking Eddard Stark to be his Hand in the first episode of Season 1 can just as easily be thought of as the postscript to the story of two young friends fighting a war to free a maiden and overthrow an evil king. Martin already gave us the climactic ending — he just set his story 15 years after it.

The deeper you get into a language, even a made-up one, the more you appreciate what amazing things they are. Even the simplest kind of casual conversation contains deceptively complex concepts. Possession is one of those kind of concepts, and it’s the kind of thing I consistently struggle with when attempting to learn languages.

Good news: Expressing possession is pretty easy in Dothraki. The Dothraki have two ways to express possession, depending on whether the noun being owned is an immutable possession, like a body part or a child, or not, like a shovel or a hammer.

Yer (you) becomes yeri (your).

Mae (him, her, it) remains mae (his, her, its), because there is always an exception or weird thing to remember when learning a language.

Kisha (we) becomes kishi (our).

Yeri (plural version of you) stays the same.

Mori (they) stays the same (theirs).

Yer (you) becomes yeroon (yours).

Kisha (we) becomes kishoa (our).

Mori (they) becomes moroa (their).

OK, let’s do some examples. (Important fake-grammar fact: The noun being possessed comes directly before the pronoun doing the possessing.)

And Now, “The Little Drummer Boy” in Dothraki

The Two Faces of Joaquin Phoenix: A Tour Through the Actor’s Menagerie of Creeps, Choirboys, and Burnouts