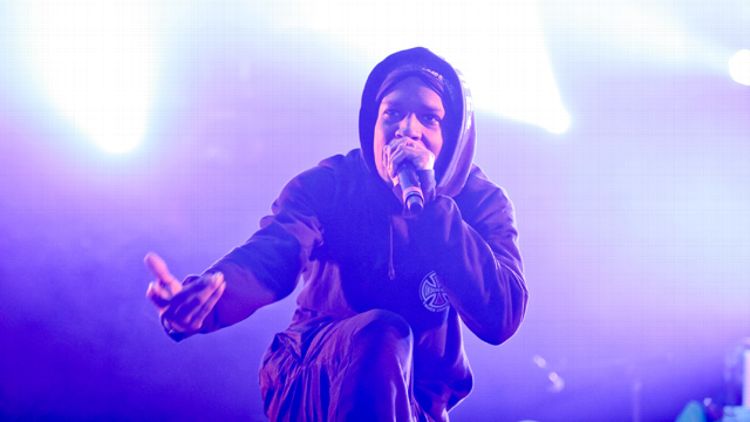 Obviously “Bath Salt” is not about bath products, any more than Lewis’s immortal “Sticky Honey” is about beekeeping. “Bath salts” is slang for a still-sort-of-legal category of designer drugs containing cathinone-derivative compounds that mimic the effects of cocaine and methamphetamine. They became America’s hot new chemical bogeyman in May, after it was reported that so-called “Causeway Cannibal” Rudy Eugene was on bath salts during his naked face-chewing attack on a Miami homeless man.

Toxicology results on Eugene, who was shot and killed by police at the scene of the attack, eventually revealed that he was on nothing stronger than marijuana. But it’s like Mark Twain said: Before the truth can get its boots on, a lie is halfway around the world, naked and deranged and chewing on a homeless person’s face. Bath salts had arrived, both as a subject for sensationalistic could-your-children-somehow-be-next local-news stories and, inevitably, as a hip-hop hashtag denoting crazy-highness and/or homicidal abandon. And while the A$AP Mob song may be the highest-profile tub-crack namedrop in contemporary rap to date, it’s not the first. What follows is a timeline of the bath-salts-references epidemic and how it spread.

On the off chance that it still needs to be said: There is nothing funny or cool or bad-ass about people trying to eat other people. (Also, don’t do drugs. But, more important, don’t eat people.)

May 27: Rudy Eugene assaults 65-year-old Ronald Poppo near Miami’s MacArthur Causeway; when he refuses to stop chewing on Poppo’s head, he’s shot to death by police. It’s subsequently revealed that before Eugene stopped and attacked Poppo, he was driving a purple, Haitian-flag-draped Chevrolet Caprice with a Koran in the trunk, and may have been on his way to a Best of the Best reggae concert; you can maybe not blame hip-hop for responding to a news story so rich in Ghostface Killah–worthy details.

June 5: The winkingly gonzo Brooklyn Tumblr-horrorcore trio Flatbush Zombies’ video for “Face-Off” hits YouTube. Rappers Meechy Darko and Zombie Juice don’t mention the drug by name — we hear a news broadcast about the Miami incident playing in the bodega where the Flatbush Zombies buy their 40s at the beginning of the video; it’s like the “Regular People Enjoying Everyday Activities Unaware That Shit Is About to Get All George Romero Up in Here” opening of a zombie-apocalypse movie. Either way, it’s a great video — the elevator gag around the two-minute mark is priceless, as is the shot where the Zombies appear to be rolling up real menacingly on a David’s Bridal.

June 25: Under his “Sam Hill” pseudonym, Cage releases “Misanthrope” via Bandcamp. Cage is a New York underground-hip-hop lifer who built a fervent cult in the ’90s by rapping about being a drug-gobbling, Clockwork Orange–obsessed madman. A narcissism-of-small-differences beef with Eminem and a few rehab stints later, he’s reinvented himself as a “progressive” backpack-rap Bright Eyes who’s tight bros with Shia LaBeouf; the “Sam Hill” identity is for songs that don’t fit that image, like this one, where he tells a potential paramour “I’m not sure you want to have sex with me / I’m on bath salts, you’re on ecstasy” and rhymes “Sharon Tates” [sic] with “Andrea Yates.” Real classy, Sam Hill.

June 26: Ex–From G’s to Gents contestant turned product-placement-tattoo pioneer and comedy-rap sideshow Riff Raff and his bearded associate Ghetty release a song called “Bath Salts” that does not actually mention bath salts, although it does mention “tiger blood,” a.k.a. the “bath salts” of six months ago.

July 4: The tipping point. Yelawolf raps about the drug on his Heart of Dixie mixtape (“I must be smoking bath salt, ’cause I’m out of my mind”). Childish Gambino (a.k.a. Community‘s Donald Glover) releases Royalty, featuring the next-level cannibalism-reference-as-blow-job-metaphor couplet “New kicks, street ball, black top, asphalt / Tight dress her ass fault / Get face like bath salts.” And Soulja Boy elbows his way into a Twitter beef between A$AP Rocky and South Florida goth-crunk rapper/producer Spaceghostpurrp by telling the latter, “We gon eat your face, n***a. Bath salts.”

July 6: The shark-jumping point. In a radio freestyle on L.A.’s Power 106, Detroit’s Royce da 5′ 9″ raps “I put you on the asphalt you try to rip my cash off / I eat your face past the jaw and season it with bath salts,” officially enshrining “asphalt” / “bath salts” as the 2012 equivalent of rhyming “Insane,” “brain,” and “Kurt Cobain” — or comparing yourself to Jeffrey Dahmer.

July 10: Demi Lovato boots aspiring rappers Seven and Magic from an X Factor audition in Greensboro, North Carolina, for rhyming about bath salts. “She said, ‘It’s really irresponsible to be rapping about drugs in front of kids,'” a source tells E! News. “Then they tried to make excuses and Demi said, ‘You talked about bath salts, I heard you.'” SONNY WITH A CHANCE IS NOT HAVING YOUR TRENDILY IRRESPONSIBLE BATH-SALTS REFERENCES, ASPIRING RAPPERS. Seven and Magic later take to YouTube, alleging that X Factor producers vetted their lyrics, including the bath-salts reference, and approved them before Lovato disapproved.

July 13: Guy Raps High on Bath Salts. From YouTube, which in the last few months has become a veritable treasure trove of people-effed-up-on-bath-salts videos as well as bath-salts rap.