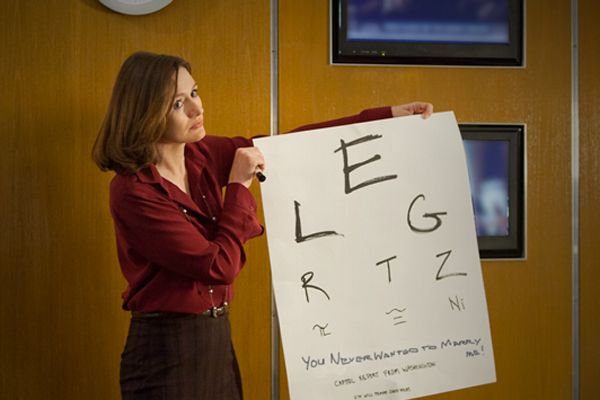 With the summer TV pickings so terribly slim this year, Hollywood Prospectus editor Emily Yoshida has had to get creative in the search for some scripted romantic intrigue until her CW shows come back. Here’s your week in ’ships on HBO’s The Newsroom.

Editor’s note: I’m somewhat pressed for time this week, so we’re express ’shipping this episode. Also, despite all appearances, I don’t necessarily hate this television program, and there were a lot of things to like about last night’s show! Terry Crews and David Krumholtz are there now!

1. The Newsroom & the Internet

“I’m going to single-handedly fix the Internet!” Will proclaims after a couple of on-air comments plucked from the ACN BBS were not the kind of reasoned, intelligent arguments he had expected from an anonymous online commenting system. The Information Superhighway has reared its ineffable head a few times before now, but it’s really starting to emerge as the MPDG of The Newsroom — the quirky, impossible-to-tie-down nymph who will confound and delight our fictional staffers (LOLs, asterisks) and our IRL showrunner alike (at least have your erstwhile writing room brainstorm like 50 commenter screen names for you to choose from before settling on “LollipopLollipop.”) So many bullets could have been dodged this week if they had just switched to Facebook commenting; at least then users would have to set up a fake account and populate it with pictures of other people’s cats before firing off their death threats.

When the only person on your staff who seems to have a functional understanding of what the Internet is and how to make it go was raving about Bigfoot two weeks (four show months) ago, you might have an employee education problem on your hands.

This week we find out that Will has been paying a psychiatrist for the last four years without seeing him, because is there really anything that sums up “Broken Rich Man” better than that? At first, Will is resistant to open up to Dr. Universe, but then realizes that therapy is yet another place where you give people money to pay very close attention to every word that comes out of your mouth, and you don’t even have to stick to current events!

Hottest speechifying: “It doesn’t take a team of Viennese specialists to see you have unresolved feelings for Mackenzie.” Dr. Universe is SUCH a Willkenzie ’shipper.

Do shrinks really keep files on your past relationships? I guess if your past relationship is as fascinating as Will and Mac’s, they kind of have to. This week we learned that Will was going to propose to Mac before the whole cheating thing — that is, after Mac storms into Will’s office to retroactively hassle him about “WHY WON’T YOU MARRY/COMPLETE ME.” See, while digging through Will’s past for dirt that Nina Howard and/or herself could possibly use against him, she finds out that he had been in semi-serious talks about moving to Los Angeles to do a late-night talk show for Fox while they were dating, and didn’t tell her. (Side note: Why was Mac suddenly on the vindictive, petty ex path again? I thought she and Will were back in a place where they were giving each other hilarious vision tests and treating each other like adults, relatively speaking? I guess Mac’s Unpredictable Uterus™ really is the ultimate plot device.) Well, it turns out that Will had just been stringing Fox along and didn’t tell her so as not to hurt her feelings, and that he’s been keeping a massive diamond ring in his desk drawer (with the receipt) ever since then, which of course renders Mac girly Jell-O. Nothing like a diamond to get a broad to shut up, amirite? I hope we see that ring again, not necessarily in the context of a proposal, but as Will’s all-purpose Mackenzie Silencing Mechanism. (P.S. This show has made me hate a hard-working, professional female character on the basis of her femaleness, and I feel gross about it.)

Hottest speechifying: “This whole time, you’ve made me feel guilty for ruining the life we would have had together, when in fact you never had any intention of marrying me! No intention of marrying me. I mean, you never even mentioned it — were you just going to go to L.A. and leave a note? Let me tell you something: The days of you being able to lord my mistake over me are behind us. I’ve lived a life that is good! And pure! You were deceiving me while I was deceiving you and, oh my God, transcribing the dialogue on this show is exhausting.”

Will accidentally calls Sloane a “He” during one of his sessions, which I think means she’s just rocketed past Mac in terms of McAvoy Units of Respect. But he also refers to her as a “little sister” and delivers a master class of truth and belittlement that sends Sloane into a tailspin trying to prove herself, and almost leads to a TEPCO spokesperson’s death by seppuku. Luckily, all is saved when Sloane agrees to pretend she made a (kind of impossible, even for someone with the most rudimentary grasp of Japanese) mistake in interpreting numbers. So it all works out, and Sloane gets her first lesson in ACN martyrdom, except with less take-no-prisoners truth-seeking, and more pretending to be dumber than you are.

Hottest speechifying: “Sloane, I watch your show at four o’ clock and you’re brilliant, but you let your guests say things that I know you know aren’t true, and then you just move on. Ask the damn follow-up, and then demonstrate with facts how the guest is lying. You can’t just sit there and be a facilitator for whatever bullshit the guest wants to feed your viewers. They’re not here to plug a movie. It’s not Jimmy Kimmel. You knowingly, passively allow someone to lie on the air, and maybe you’re not a drug dealer, but you’re sure as hell the guy who drives the dealer around in his car. Maybe you’ll get it, and maybe you won’t. Show me something.” [Checks Blackberry.]

Hey, girl. You know you need that wisdom from your overbearing mentor/father figure to retain the self-loathing and uncertainty that keeps you in your place professionally.

Not much new on this front this week, but Jim and Mags do have some giggly fun while background-checking Will, which prompts Don to freak out on Sloane, interrupting a very shouty conversation about the TEPCO spokesperson by asking her “Am I losing Maggie?!” Sorkin loves to do the thing where when someone is getting overheated about a subject of professional concern it turns out they’re just twitterpated, which kind of undercuts the whole professional fantasia thing. Anyway, don’t sweat it, Don. A few more Georgia/Georgia-grade flubs and even Jim’s affectionate gaze as he watches her stumble out of the office will turn to pity and embarrassment. (Actually, I’m waiting on a Charlize Theron–Arrested Development–style reveal, which would redeem so many things that Maggie has done and said up until now.)

Boys: Did It Really Take This Long to Do a Perfect Parody of Girls?