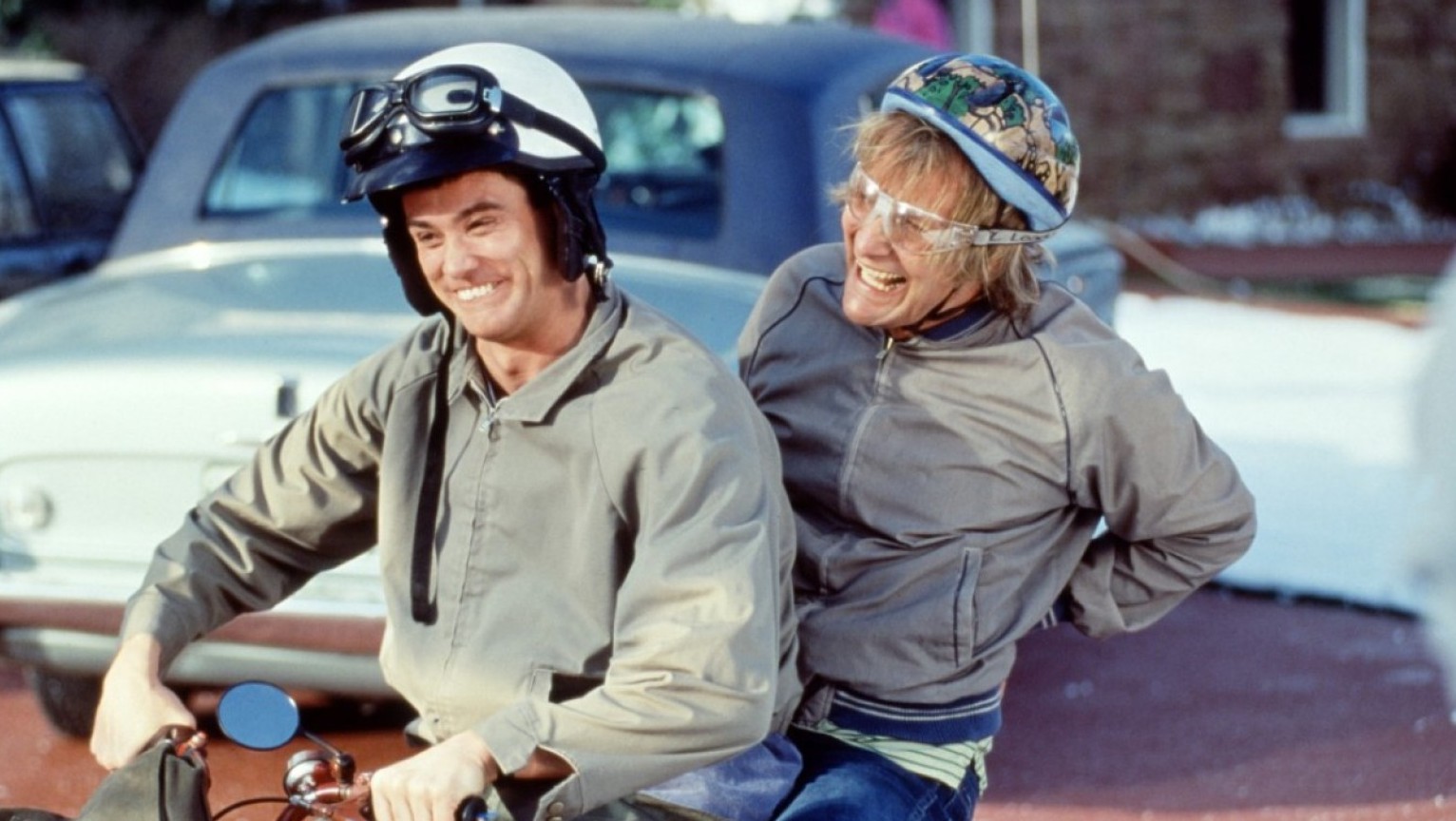 For a full 20 years, darkness had fallen across the land; many feared that even the holiday spirit could not fill the kingdom’s bone-dry coffers. Then, lo, as had been oft foretold these past two decades, a pair of legendary heroes returned riding their trusty dog-mobile. They brought groin-based humor, juvenile merriment, and, most importantly, movie gold back to the kingdom. Translation: Making like it was 1994 all over again, Harry and Lloyd gave us a good weekend at the box office.

Dumb and Dumber To led the charge in the no. 1 slot, and the domestic box office raised its roof 10 percent over the same weekend last year: Thanks to that, 2014 now stands at $8.9 billion year-to-date versus 2013’s $9.2 billion. Where Christopher Nolan’s painstakingly accurate screen depiction of Einstein’s theory of relativity had fallen short, Jim Carrey’s fart jokes could not fail. Surprise! The box office smorgasbord is fast filling with options for the approaching Thanksgiving moviegoing bonanza: You’ve got your fancypants IMAX science after-school specials, several choice animated kiddie films, and, of course, toilet humor. For dessert: specialty release pie with just a dash of prestige. So as you plan your menu of Thanksgiving cineplex-hopping, allow us to highlight the winners and losers for your edification.

Once Jim Carrey bestrode the box office like a Gumby-limbed colossus with nearly $2.5 billion in ticket sales from 27 films. But the last decade has been a (relatively) rough one for Carrey: He hasn’t starred in a live-action film that grossed over $100 million. Where once he delighted us with the infinite flexibility of his face, Carrey was playing second fiddle to Steve Carell and drilling a hole in his head in Burt Wonderstone. But with Dumber and Dumber To’s first-place $38.1 million opening, Jim Carrey may break the $100 million ceiling once again. Obviously, he didn’t do it alone: Jeff Daniels filled out the other half of the dynamic duo of dumb, taking all that Newsroom prestige, stuffing it with firecrackers, and striking a match.

And it’s a bona fide hit — not critically, of course. But that $38 million tops the original’s opening weekend, even accounting for two decades’ worth of inflation. Universal nonetheless had drastically lowered expectations: It didn’t even finance the $40 million film (Wolf of Wall Street backer Red Granite did). Universal had projected a modest $25 million opening, anticipating the same heart failure as other years-past-their prime sequels like Live Free or Die Hard and Sin City 2. Surprisingly, 47 percent of the film’s audience was under 25, i.e., they were rug rats when the original came out. Somehow Harry and Lloyd stayed relevant — perhaps via the original’s endless loop of replay on cable — and now it’s only a matter of time before Ace Ventura 3 1/2: When Reboot Calls renews our undying love of Carrey speaking out of his ass.

Unfortunately, not everyone could channel that lost ’90s magic: Beyond the Lights’s attempts to reimagine The Bodyguard by way of Rihanna undershot its $10 million high hopes with a dainty $6.5 million opening. The movie only cost $7 million to begin with, so it’s not an outright loser. But Relativity Media, once the new kid on the block who could do no wrong, has missed its mark a few times of late with The Best of Me, Earth to Echo, and Brick Mansions in just the past few months. If you’re wondering what those movies are, then you get the picture. On the bright side, Beyond the Lights had an “A” Cinemascore, so it might pull out a nickel or two if it can hang tight over the Thanksgiving holiday.

Science had its day at the box office last weekend, but it decided to stick around for a little while longer, despite the onslaught of dummies. Both Big Hero 6 and Interstellar posted quite impressive holds in their second weeks — slipping a mere 36 percent and 39 percent, respectively — which means Big Hero 6 is Disney’s biggest printing press since Frozen, and Interstellar will pass the $100 million mark at the domestic box office early this coming week. Add the $200 million international gross and I almost feel compelled to post a retraction on the “Loser” label I hesitantly slapped on Nolan last weekend. Even Theory of Everything expanded well, maintaining an $18,000-per-screen average on 41 screens, for a grand total of over $1 million so far.

Semi-Loser: Jon Stewart Behind the Camera

On The Daily Show, Jon Stewart’s razor wit can cajole us to sit through even the wonkiest of his Beltway guests. But as Death to Smoochy ominously foretold, he can’t quite get us into theaters. His directing debut, the thoughtful indie drama Rosewater — about journalist Maziar Bahari’s imprisonment and torture in Iran — huffed and puffed its way to $1.2 million on 371 screens. It could still show staying power with good word of mouth, but considering that Stewart put the full force of his media presence on the line, $1.2 million feels just a little humbling. On the plus side, it gave us all the excuse to say the word Kafkaesque over and over this weekend.

If Stewart wants some tips on how to get real, he might turn to erstwhile protégé Steve Carell, now an A-lister in his own right. The toast of Cannes 2014, Bennett Miller’s Foxcatcher was the clear victor at the indie box office this weekend: It grossed $288,113 in only six theaters, for an impressive average of $48,019. Playing Olympic champion wrestlers Mark and Dave Schultz, Channing Tatum and Mark Ruffalo give fantastic, Oscar-worthy performances, but Carell steals the show as the just-odd-enough-to-creep-you-out-but-not-odd-enough-to-ignore-all-his-money industrial heir John du Pont. Not since Danny DeVito’s Penguin has a prosthetic nose been so sinister — and so compelling. Since it’s such a heavy Oscar favorite, Foxcatcher should keep playing well as it expands over the holiday season. 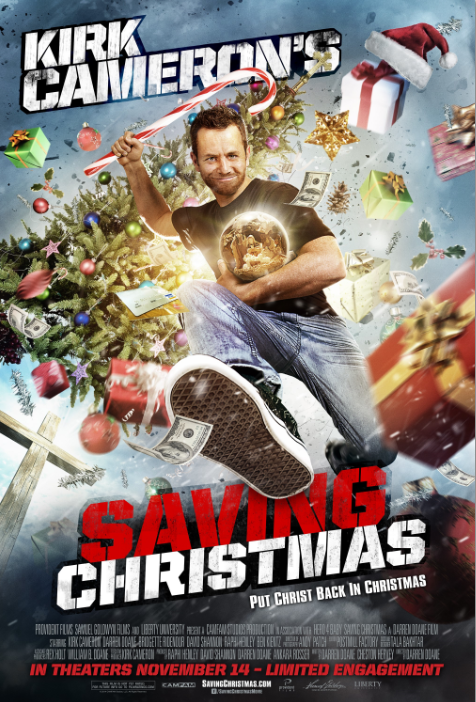 No, Virginia, not even Kirk Cameron can save Christmas. Despite its spooky psychedelic poster, the low-budget holiday screed Kirk Cameron’s Saving Christmas earned just over $1 million on 410 screens. Of course, the holidays are still ramping up, so there’s time for all those die-hard fans of Cameron lecturing you in the driveway to make the film a hit. But just in case, you might want to prep some Kleenex for when you tell the kids there will be no Christmas this year because Kirk came up short. Meanwhile, I’ll be lining up for those Black Friday sales.