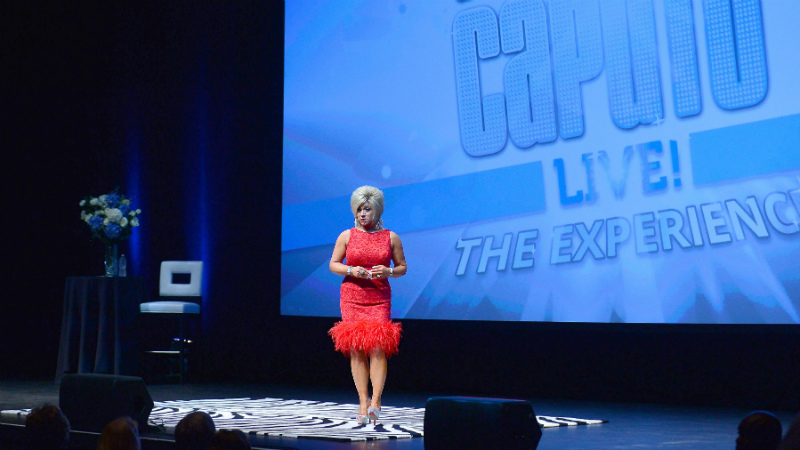 In the upper balcony of New York’s ornately decorated Beacon Theatre, hands were waving and voices beckoned. “Theresa, come up here!” Somewhere below, her hair meticulously crafted into her signature bleached-golden bulbous onion dome, Theresa Caputo was stalking the auditorium floor, asking the audience, in her Long Island bleat, whose deceased loved one had once wanted to have their eyes donated to medicine. “Your mother wanted to have her eyes donated, but nobody donated her eyes,” Caputo states, sounding ever so slightly annoyed. “Nobody understands donations here?” From the balcony again, pleading now, “Up here! Up here!”

“No, I’m telling you, there’s something about a donation here.”

Theresa Caputo is the star of Long Island Medium, which airs Sunday nights on TLC, the cable channel that also airs such shows as Here Comes Honey Boo Boo; the birth canal–distending 19 Kids and Counting; and Cake Boss, for those who crave a dash of fuhgeddaboudit with their diabetes. The show follows Caputo as she goes about her day in various New York and outer-borough settings — the supermarket, the deli, going ice skating — where she becomes the conduit for communication between people she bumps into and the spirits of their deceased loved ones. The show recently completed its fifth season and pulled in just under 2 million viewers per episode, down from the heady days of 2012 when it was watched by upwards of 3 million viewers and coming in third behind Keeping Up With the Kardashians and The Real Housewives of New Jersey. But it’s still a decent enough number when one considers the actual human collateral, about 3,000 of whom were packed into the Beacon Theatre on Sunday afternoon for the first of two Theresa Caputo Experience live shows.

“Now, there’s something over here, I don’t what it is.” Caputo points a talon-like, porcelain-white acrylic nail at a woman sitting toward the front of the theater. “Are you in a unique situation? ‘Cuz I’m like, I have no idea what’s happening, no idea what’s going on, so just so you know, it might take me — ‘cuz I don’t know what it is. It’s unique, is that correct?” She never comes back to this person.  It’s a weird thing being in the presence of someone fully committed to a hustle in front of several thousand people; you get a little nervous for them when the grift hits a snag, when the leading questions come up empty, the person staring back in glassy-eyed confusion. You almost want the con to come off, because, if it didn’t, Caputo’s marks would be lost. I mean even more than they are now.

My original reasons for going to the show were twofold: One, as someone who grew up on Long Island, I hold a special fascination for celebrity Long Islanders. Two, I was pursuing an idea that mediums are essentially professional wrestlers but for regret. The metaphor seemed pretty apt at first. Professional wrestling is a quasi-athletic scripted soap opera — kind of the distilled essence of sports narratives minus the actual sports — that is mind-bogglingly popular despite everyone knowing that it’s fake. Long Island Medium, like its predecessor Crossing Over with John Edward (Edward is another Long Islander), seems fraudulent. So clearly fraudulent, I thought, that on some level its fans must realize that it’s not real.

Caputo refers to the various pokes, voices, and images she experiences via the ghostly presences that circulate through the ether as “Spirit.” (As in, “When Spirit comes through,” etc., etc.) She carries herself with a kind of blue-collar, tell-it-like-it-is Italian-mom vibe that is a definite part of what makes her shtick so successful. After a woman tells her that the person next to her is her daughter and not her sister, Caputo shrieks, “Get outta heeya!” When another woman mentions that her deceased brother played keyboards at the Beacon in 1967, Caputo exclaims, “Shut up. That’s the yeeuh I was born!” She also has an off-putting habit of blurting out “Perfect” after an audience member confirms some detail about their loved one’s death that happens to jibe with whatever random-seeming-but-not-really-random bit of faux-Spirit whispering. “Do you have children?” The man whose mother is ill replies that he has godchildren. “Were they just up at the hospital? Were they just with her?” The man says that his mother is at home on hospice. “Because they showed me her and the child on the bed.” The man replies that, yes, the children are there. “Perfect.”

Her queries are just vague enough to seem like non sequiturs while actually being general enough to be about nearly anyone. The effect of vague statements that seem pointedly specific causing a person to divulge personal information was first described by psychiatrist Bertrand Forer in a paper titled “The Fallacy of Personal Validation: A Classroom Study of Gullibility,” which was published in 1949 in The Journal of Abnormal Psychology. In the paper, Forer describes an experiment in which he gives each of his students a “personality sketch” consisting of 13 general statements culled from an astrology book. Each student received the identical personality sketch but in personalized envelopes, their names printed on the front. Some of the statements: “You have a great need for people to like and admire you”; “You have a tendency to be critical of yourself”; “At times you have serious doubts about whether you have made the right decision or done the right thing.” Forer then asked his students to raise their hands if they felt the sketch was an accurate description of their personalities, and all of their hands went up.

In a theater full of people trying to cope with death, Theresa Caputo is speaking for Spirit: “Do you carry the picture with you?” “Who was murdered?” “I want to talk about the young man who actually hung himself.” “I’m getting that someone was in a car crash.” “I’m getting a drowning. Who had someone drown? Did their body fill with fluid?” “Where does the mother-figure come in for you?” “I’m getting that she wasn’t herself in the end.” “Did you connect with wildlife with your mom?” “Did she like peas or edamames?” “Do you have dreams of him?” “Did your father always wear the same type of shirt?” “Did you just get the goose bumps, sir? Know that that is your brother’s soul.”

Led to a young woman and her dad after they responded to her question, “Who had the G name?,” Caputo strikes gold. Caputo knows when she has someone who is receptive, mostly, I think, because that person is already visibly distraught, and when she finds that person, she talks to them a long while. After Caputo tells the woman that her mom is watching over her, the woman — who was already crying — weeps freely and hard, shoulders lurching, face curled in sadness, an unbroken string of tears dripping down from her nose. “She says ‘I want you to be happy.’”

Here’s the thing: A lot of the people Caputo is “reading” probably feel a whole lot better after this. “Your father/mother/brother/sister/son/daughter is always with you” is the kind of thing the majority of people in the world want to hear. Many of the people she speaks to break down almost immediately, their suffering palpable. And if they pay $100 for a ticket, well, that’s still cheaper than going to the shrink. Or that’s what I imagine Caputo tells herself as the audience calls out to her, begging the medium to come up to the balcony. To hear their problems. To ease their pain.

And suddenly, here she is, emerging from the hall onto the balcony landing to loud cheers. “I am looking for — I don’t if I’m here or one level below — the family that lost their son to the drowning.”