We Went There: An Intimate ‘Food’ Party With Kelis and KCRW 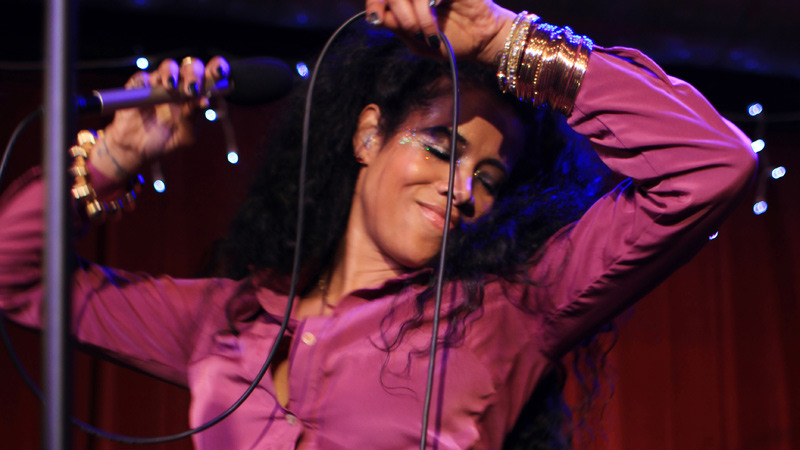 “I’m a feeder.” This is how Kelis Rogers, R&B singer, food TV personality, and milk shake artisan described herself midway through her live set last night for KCRW’s Morning Becomes Eclectic. “I don’t do little portions, I do, like — let’s eat. I like abundance.” The word brings a multitude of maybe-not-conflicting ideas to mind: maternal provider, food-obsessed fetishist, Method torture artist — and all of them seemed appropriate given the context. The artist who over 10 years ago made her big break with the Neptunes-produced dairy anthem “Milkshake” is getting ready to release her sixth album, titled Food and produced by TV on the Radio’s Dave Sitek, on esteemed British independent label Ninja Tune — a defiant break from the series of middling major-label efforts she’s put out since 2003’s Tasty. She also recently debuted a Cooking Channel special called Saucy & Sweet. (Rogers is a Le Cordon Bleu–certified saucier.) If nothing else, she knows how to stay on message.

Backed by an 11-piece band crowded onto the small stage of the Apogee Studio — producer Bob Clearmountain’s, plush, brick-walled recording space tucked away on an anonymous industrial block in Santa Monica — Kelis made good on her word and proceeded to feed us, and feed us, and feed us with the warm, gooey soul that characterizes Food. If there’s such a thing as a huggable sound, Kelis’s husky, inviting voice certainly is one, especially in service of her exuberantly wholesome new material. Just as the folks closer to the stage could reach out and touch the trombones and trumpets in the cozy confines of the studio, Kelis’s chill new vibe felt almost tangible, the prerecession ostentation of her “Bossy” days but a distant memory. She wore a sensible silk fuschia shirtwaist dress that wouldn’t look out of place in Rachael Ray’s closet, but accentuated it with piles of gold bangles and shimmering eye makeup that extended to the edge of her almost elementally affable visage, as if to embrace her status as a 34-year-old mother while not letting us forget she’s still got a lot of freaky tricks up her sleeve.

She opened with the bright, Marvin Gaye smoothness of “Breakfast,” which got the white-haired members of the KCRW-listener crowd grooving and putting their arms around their plus-ones, and then launched into “Millionaire,” the Tasty-era synth-funk jam she cowrote with Andre 3000. The session was her only L.A. performance before Food’s April 28 release (and will be aired on KCRW on April 18), and as goofy as the album’s title and track names (“Jerk Ribs,” “Friday Fish Fry,” “Cobbler”) appear, Kelis was there to tell everyone in that studio that she’s serious — both as a cook and a musician, two roles she sees as intertwined. There was a free-jazz-festival-in-the-park feel to the evening — the kind of music kids dance around barefoot to, while their parents sit back and enjoy a cold post-picnic beer. But with Kelis, even that feel-good domesticity couldn’t help but come off as slyly subversive.

In many ways, Kelis could seem doomed to a fate as a Keri Hilson–type footnote of the R&B world — a one-hit wonder whose career got lost in the fray as the male rappers and producers she’s been associated with (and allegedly dated, and divorced) enjoyed more long-term commercial success. But even going back to her 2001 U.K. single “Young, Fresh n’ New,” it was clear she was on to something more avant-garde and interesting than many people gave her credit for — “Milkshake” got the attention it did in part because of its porny suggestiveness, but it’s easy to forget it sounded like nothing else on the radio at the time. History has more or less decided to chalk that one up to Pharrell and Chad, but Kelis made it known it was every bit as much of a decision on her part. “At the time, everything R&B was real croony, which was great, but I was like, ‘Let’s do something else,'” she told host Garth Trinidad in a brief Q&A midway through the set. “Especially with the resurgence of hip-hop and everything that was happening at the time, I wanted a rhythm-based song.” She added, with a refreshing boastfulness one rarely hears in female musicians, “Music veered in a different direction after that, and I like to think I had a part to play in it. And [“Milkshake” is] still fun! It’s still fun.”

After the Q&A, she and the band knocked out a few more jams, including a brassy rendition of that aforementioned still-fun song and an encore cover of Nina Simone’s “Feeling Good” that nearly set fire to the rows of birds-of-paradise lining the stage. After all the ups and downs of the past decade, the sentiment seemed richly deserved. “This is what we do: We write music, we listen to music, we eat, we talk, we have a good time,” she said of her recording process with Sitek and the band. “By the end everyone’s exhausted and full — and that’s pretty much the way I like to leave, anyway.”

They Get the Girls, But We’re Smarter: Modern Baseball, the Wonder Years, and Rock’s Sacred Uncool

Do You Like Prince Movies? Podcast: The Careers of Aaron Paul and Alec Baldwin