We Went There: An Intimate Evening With Tracy Morgan and Hannibal Buress at the 92nd Street Y 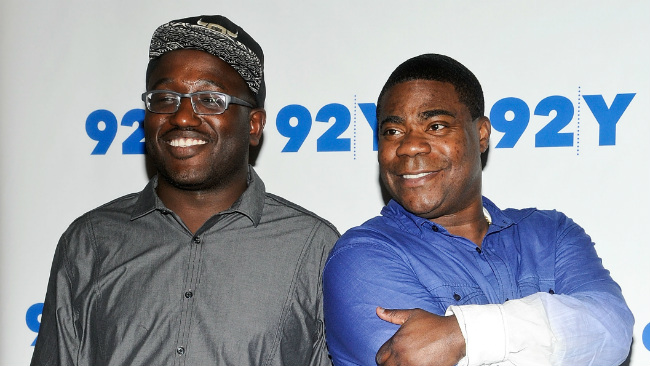 Last night, Tracy Morgan and Hannibal Buress took the stage at Kaufmann Concert Hall of the 92nd Street Y, a venerable New York cultural institution, for a chat that was in turns and simultaneously rambling, profane, and hilarious. Morgan is best known for his 10-year stint on SNL and seven-season role as an FCC-compatible version of himself on 30 Rock. He has a new hour-long special airing on Comedy Central this Sunday night titled Bona Fide, and the conversation at the Y was ostensibly to plug that.

Smart then, to plug Bona Fide as part of a conversation with Buress, who is developing into something like the comedian of the moment. Buress is not the biggest name in comedy by a long shot, but his résumé as a writer and performer is packed with small-to-medium-size contributions to a list of projects that could’ve been ripped straight out of an aspiring UCB nerd’s dream journal: writer on SNL; writer on 30 Rock; plays Lincoln, Ilana’s sort-of-boyfriend/definite booty-call/sometime dentist on Broad City; the voice of Crisco on Chozen; and assorted appearances on Louie, The Eric Andre Show, and Kroll Show. That’s before mentioning his three comedy albums and multiple stand-up spots on Conan, Fallon, Kimmel, Letterman, and Ferguson. All of that in the last seven years. His pilot, Unemployable, hasn’t been picked up by Comedy Central just yet, but that hasn’t stopped Buress from basically willing it to happen, which is the kind of baller move one pulls when one is as hot as Hannibal Buress.

Morgan and Buress could not be more different as performers, and that’s part of the appeal of seeing them in a setting like this, despite Morgan’s penchant for talking over, through, and beyond Buress’s attempts at asking questions.

My favorite member of Wu-Tang was ODB, not because he had the best bars — which he was not even close to having — but because you just had no idea what he might say next or even how he might make his voice sound when he said it. It’s the same kind of thing with Morgan, whose stand-up and interview appearances often take on an interconnected dream-logic kind of structure, with hood anecdotes, offensive-and-yet-you’re-laughing bits on race, and assorted musings on the various acts of human sexual congress delivered in full 1080p resolution. “If I talk about a butthole,” said Morgan at one point last night, “I describe the creases in the butthole.” He can be totally uproarious and borderline derogatory one second then subtly affecting the next, as when he went on a long, pornographic riff about siring children and not wearing condoms (“If you ain’t willing to die for it, then you don’t want it bad enough”) then explaining how, growing up in the projects, all a person has is their own body and those of the people around them.

Buress’s style is cooler, fully under control, with a modernist’s willingness to play with the form of a stand-up set. Buress has a bit called “Gibberish Rap” that features a live DJ, several ballerinas, and lyrics like “Rap rap rap / I’m rap rap rap rapping / in my socks rapping / got on my jeans / jeans / degrees / put on deodorant” and then a bunch of sounds like when a kid pretends to shoot a machine gun. His delivery isn’t at the level of conversational ease of someone like Louis C.K., where you barely register that you’re hearing set-ups and punch lines, but the progression from his first comedy album to his latest, Live From Chicago, suggests that as a destination.

Morgan wants to tell you, in hilarious and volatile detail, where he’s from. Buress is the guy who made you crack up in the common room of your dorm while watching TV at 3 a.m. It was fun watching those two, in the distinguished 85-year-old wood-paneled hall — with the names BACH, BEETHOVEN, LINCOLN, WASHINGTON, DAVID, MOSES and other historical dude luminaries inlaid around the walls — gleefully tearing down the artifice of contextual authenticity projected by such an iconic and historic space.

On the (very important) question of white people using the N-word at karaoke.

Morgan: “When you drinking at the karaoke spot, know how many [N-Words] are in the song.”

On the Brooklyn Nets

Morgan: “If you’re a Nets, Mets, or Jets fan, you probably have low self-esteem.”

On Buress writing for 30 Rock

Morgan: “It was just you and a sea of white dudes.”

Buress: “We had an Indian dude.”

On the 92nd Street Y

Morgan: “I didn’t even know this shit was here! Is this the Upper East Side or what? This is where the good cocaine is.”

Buress: “I want to open a Jamba Juice.”

On performing for white audiences

Morgan: “That’s why I wear a watch. Because if white people see me wearing a watch they feel like they can trust me.”

Filed Under: We Went there, Comedy, Tracy Morgan, hannibal buress

'Orange Is the New Black' Season 2 Trailer: This Is Not How I Imagined Prison to Be at All