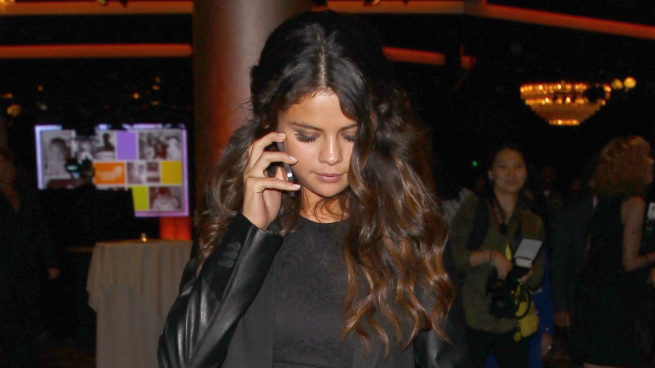 Impending Meltdown of the Week: Selena Cuts Professional Ties With Her Mom

It’s been only one week since Selena Gomez wobbled her way into this space via a Miami recording studio, but what an eventful seven days they’ve been. Because backsliding into a relationship with known punk Justin Bieber wasn’t rocky enough, Gomez decided to fire Mandy Teefey, her manager … and mother. Teefey has been the momager-in-chief since Selena’s early Nickelodeon days. According to TMZ, mother and daughter had discussed the change, but Teefey found out it had actually happened by way of the Internet, just like the rest of us. There’s a world in which this is a good move for Gomez: To break out of the Disney roles and move away from the cheesy tunes even someone with the strongest pop-music constitution does not enjoy, maybe she needs a new team. But that is not the world we are living in. The Internet rumor mill suggests Gomez will replace her own momager with the most infamous of them all, Kris Jenner, a rumor intensified by Selena attending Coachella with Kylie and Kendall Jenner. Bieber’s manager, Scooter Braun, is also supposedly in contention. Neither seems like a good option, unless Gomez is looking to land an E! show about her life. Jenner has Keeping Up With the Kardashians, while Braun produced the Wanted’s one-season show. Whoever got Gomez a part in Spring Breakers should be consulted.

Fleeting Couples of the Week: Katy Perry and Diplo, and Tom Cruise and Laura Prepon?

Spring is in the air in California, and Katy Perry is getting a head start on summer romance. Apparently, she found love in a dusty place at Coachella. Lainey Gossip says Riff Raff is out and music producer Diplo is in. KP’s relationship with John Mayer yielded the clunker “Who You Love,” but a Perry-Diplo union is a promising musical proposition. But where does that leave her musical producer/guru, Dr. Luke? He is the classically trained chef of music, having learned from Swedish master Max Martin. Perhaps Katy Perry has decided to feast on new cuisine.

Elsewhere in Southern California, the Tom Cruise rumor mill is operational once again. It’s been 659 days since he announced his split from Katie Holmes, and he has not enjoyed a significant public relationship since. What’s taking so long, Tom? Page Six will have you believe this long period of romantic dormancy has finally ended with Laura Prepon. Grantland offered several suggestions, but we failed to account for any known Scientologists. Prepon is a devoted follower, and when the news surfaced that her role on Orange Is the New Black would be scaled back in Season 2, some sites suggested her religion may have been a motivator. This was never confirmed. Using past relationships as a precedent, let’s assume Tom will provide clarity on this important matter very soon.

Gwyneth Paltrow continues to uncouple. The CEO of Goop, Seb Bishop, has quit, refusing to relocate to Los Angeles. The company had been based in London, but now that her marriage is over, Gwyneth is “severing ties” with London. It’s like her own Revolutionary War. The most shocking news regarding Bishop is that he once served as CEO for international AIDS charity (RED). He gave up that job to oversee a newsletter that announces divorce. The Goop company must have fantastic perks.

Most Perplexing Coachella Outfit of the Week: Pope Aaron Paul

Aaron Paul is confusing. He played Breaking Bad’s Jesse Pinkman with a great amount of depth, and he was wholly convincing as the sensitive teacher turned husband of Amanda Seyfried’s character on HBO’s most underrated show, Big Love. (Seyfried and Paul are still close. It’s adorable.) Yet every other public data point about him suggests he is some kind of goon.

Is this a person we are supposed to take seriously? Apparently Arcade Fire does, because Paul made it into the band’s Coachella bobblehead inner circle.

Yes, that is a papier-mâché bobblehead of Pope Francis, and Aaron Paul wore it. The bobbleheads are part of Arcade Fire’s tour aesthetic. The question remains: How did Aaron Paul become bobblehead-worthy? Win and Regine must love Breaking Bad.

Too Dark to Joke About This Week: Lindsay Lohan Falls Off the Wagon (Again) at Coachella

Lindsay Lohan was seen drinking alcohol during Kid Cudi’s set at Coachella. She has been in and out of rehab many times. Her week got worse yesterday, when the Daily Mail reported that her OWN show wouldn’t be picked up for a second season. She is not even entertaining enough for a nascent cable network.

We Went There: An Intimate Evening With Tracy Morgan and Hannibal Buress at the 92nd Street Y