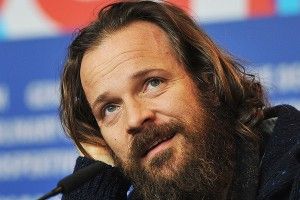 As Grantland has previously pointed out, it’s actually not so mind-boggling why AMC would bring back The Killing for a third season. Despite the hair-pulling, eyeball-popping revulsion with which the first season’s ending was greeted, and the general “wanna watch The Killing or this leftover episode of Cash Cab I’ve had on the DVR for three years?” indifference with which the second season was greeted, the show was still a known entity with serviceable actors (one of whom, tall glass of Swedish water Joel Kinnaman — your new RoboCop — may yet become a movie star), a workable formula, and, if not exactly good ratings, then not exactly the most insanely terrible ratings, either. That said, now it’s time to tackle another Killer question: Why did Peter Sarsgaard just sign up for Season 3?

This time around, Holder and Linden are back, but the Rosie Larsen case is done, and a new investigation is brewing. The exact details haven’t been spelled out, but Sarsgaard will be involved in some villainous manner: THR reports he’ll play “Tom Seward, a condemned inmate for whom the clock is clicking down. He’s described as a lifelong convict born into poverty and crime who has been in and out of the system for violent crimes since he was 10. Never wanting to appear weak, every interaction for Tom is a challenge and one he must dominate.”

The puzzling thing: I know my dude Sarsgaard’s not exactly lighting up the multiplex these days, but he is only three years removed from An Education and still working steadily. If Pete was bored with the movie roles he was getting offered and wanted to do cable TV, couldn’t he have started fresh, with a show not generally considered a corpse AMC is making smile and walk around the party being extra nice to everybody? Surely, Showtime would have had him?

• He’s really psyched about the role, which is low commitment and showy, and actually does sound kind of perfect for Pete, who really can’t help say a single word without sounding at least a tiny bit like he wants to murder you and your extended family and your dog.

• He was totally into the holistic journey that was The Killing, and this is a super-subtle middle finger to the haters.

• He just wants to get as close as possible to Joel Kinnaman, which, I mean — can’t blame him for that!