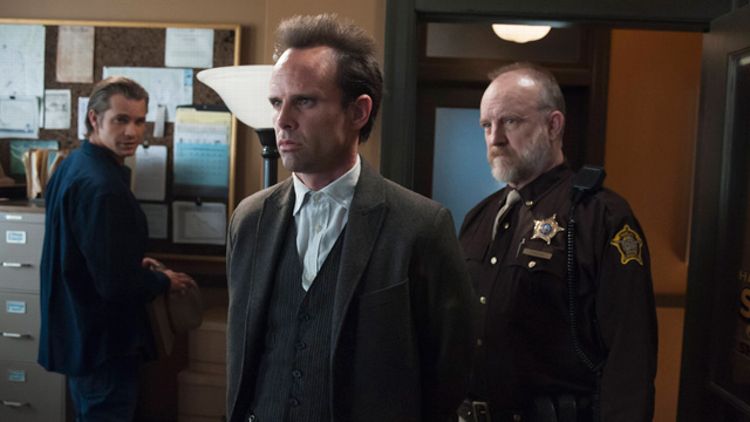 Well, that was a mess.

“Foot Chase” is like a weird funhouse mirror version of last week’s highly entertaining episode, wherein there’s an artificial time limit — Josiah will bleed out and die from the wound to his leg if he’s not given medical attention soon — but there’s next to no urgency on the part of anyone trying to find him. When Raylan and Boyd spent last episode trying to find Drew Thompson before Arlo could cut an immunity deal or the authorities could haul Drew in, respectively, the time constraints were even more artificial than they are this week, as they were entirely arbitrary. An old man can only lose so much blood before he dies. Yet “Foot Chase” mostly saunters along, taking its time and generally incorporating lots of plot points that are hard to care about, like Colton’s addiction or whatever Tim was up to.

There are some bright spots here. It’s always fun to see Raylan making new friends, and his team-up with Sheriff Shelby is one for the ages. Jim Beaver is one of the many, many Deadwood alumni to turn up on this show to hang out with his former co-star Timothy Olyphant, and while the two never worked together all that much on Deadwood, they have an easy rhythm here that often comes from two actors knowing each other well enough to know exactly what will and won’t work. Shelby’s intent on proving that he’s on the right side of the law; Raylan’s deeply skeptical of this, considering who finagled Shelby into office. Yet the man seems to truly want to bring down Boyd, and he proves it by hauling Boyd in to ask him a few questions before his lawyer can get there and interrupt the process. With Shelby and Constable Bob on his side, how can Raylan possibly fail? (Besides the dozens of obvious reasons?)

I also rather enjoyed watching Ava squeeze her way into the world of Kentucky’s richest to get herself and Boyd invited to a fancy party where they might scope out the crowd and see if they can find Drew, whose last known sighting was in the company of bigwigs. Ava’s methods — which involve the coercion of a man who frequents her establishment via blackmail — prove to be slightly more effective than Boyd’s, which involve breaking into a guy’s house and forcing him to dig up old newspaper clippings to prove he’s not Drew. (In the process, he’s also revealed to be a terrible poet. Colton seems particularly disappointed by this.) We’ll see if this all pays off next week, when I assume the party will take place, but we’re at the right point in the season for something to give.

Also good on the Ava front was her grief and discomfort about the death of Ellen May, a death she initially wanted to happen but has come to regret. A few episodes ago, I suggested that there was a line between Boyd and Ava building up over this, and though both might have thought Ellen May’s death necessary, Boyd was the only one who’d be able to actually order it, because he’s the guy who gives the orders, he’s done this before, and he’ll do what needs to be done. Joelle Carter played Ava’s slight breakdown over what happened with just the right note of frustration and regret. The show also gave the two something to lose should Boyd’s operation be brought down around his ears. See, Boyd wants to buy a big house with his ill-gotten gains, so that, in a few generations, the Crowder name might truly be respectable. He, too, wants the kind of family redemption that pushed Raylan to join the marshal’s service; he just doesn’t see how it can come through him. Justified is always so good at depicting how children deal with the sins of their parents; now, it’s showing how its two main characters aim to give their own children a place where they might not be destroyed by the actions of their fathers.

On its face, the Ava and Boyd engagement is a strange place to end the episode. (My wife remarked that it made her feel like one or both of them are going to die before season’s end, but I don’t really think Justified would dig into a cliché that hoary.) The connection between Carter and Walton Goggins is such that the two mostly make this relationship play, but the whole thing is sketchy if you stop and think about it too much. (Boyd hooking up with the woman who killed his brother, who once shacked up with his archnemesis? All right.) In addition, it sort of felt like this whole scene came out of nowhere. Boyd’s a guy who’s good at playing the long game and only letting people — including the audience — in on it when he absolutely needs to. But this “reveal” was fairly unsurprising. Boyd wants a better life for his kids, and he wants to have those kids with Ava. Noted.

The engagement scene, however, might have been a sweet capper to an intense episode if the whole “Josiah is Drew Thompson; no, wait, he isn’t” double-cross had made a lick of sense. I mean, you can put the pieces of this story together if you really try — my best guess is that either Arlo lied directly to his lawyer about Josiah being Drew, and she hired the two criminals to kidnap him, or Boyd lied to said lawyer about something Arlo (whom he hasn’t seen in a while) told him — but the lack of urgency about finding the old man is already a problem, and by the time the lawyer wanders into the room where the two idiots are trying to keep Josiah alive (eventually cauterizing his wound with a blowtorch), the whole thing is straining credulity all over the place. It feels like this episode is missing a handful of scenes that would explain any number of things that would make some of these character motivations make more sense. (For instance, how do Raylan and Shelby find Josiah’s captors? Are they just driving around Harlan, looking for that van?)

But on top of this, the episode was also filled with a bunch of plots that didn’t particularly matter and didn’t seem to go anywhere. Colton’s addiction could be interesting in light of his anxiety over losing Ellen May, but it mostly just drops into this episode to remind us that this is all going on, and we’ll hear more about it in a few weeks. And I don’t even want to try to figure out how Tim’s business with his friend was supposed to fit into the middle of all of this. The show’s efforts to give Tim and Rachel more to do this season have mostly paid off, but this felt like a transparent attempt to remind us that Tim is a veteran who’s overcome some of his issues, but he’s still got a ways to go. I’ll be honest: These scenes felt so disconnected from everything else that if I wasn’t getting paid to watch, I might have fast-forwarded them, even as the episode tried to force a connection between them and everything else that was going on.

“Foot Chase” isn’t an irreparable drain on the season or anything. It’s just an episode meant to mark a little time before the fireworks can start up again. But the first five episodes of this season were so confident and smart in their storytelling that an episode where all the pieces don’t add up feels that much more disappointing. There’s probably more good than bad here — since the Shelby and Raylan team-up and Ava’s scheming take up so much of it — but it’s the first episode this season where the bad points are more than just a handful of quibbles.

Todd VanDerWerff (@tvoti) is the TV editor of The A.V. Club. His writing has also appeared at Hitfix, The House Next Door, and the Los Angeles Times.