The Cracks Begin to Show: With Three Episodes Left, ‘Justified’ Goes for Broke 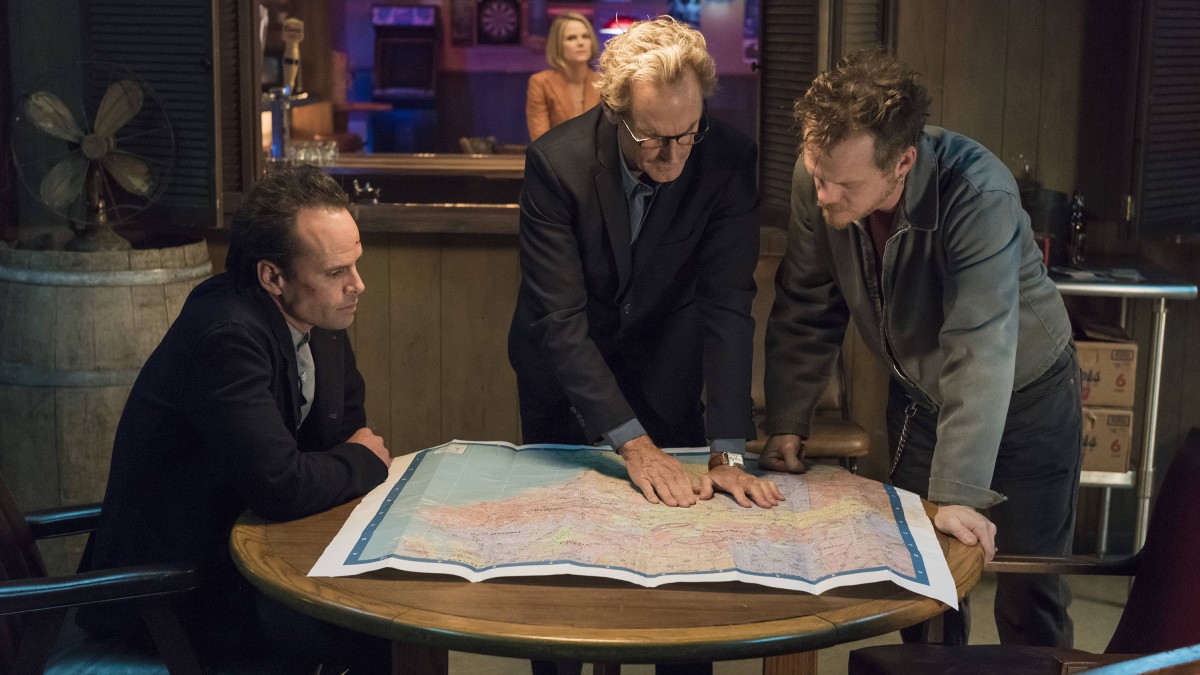 Does it feel a little early, in Justified’s final season, for an episode like “Trust”? The show has been careful, over its five-years-plus, to stage its fireworks with plenty of room after for cleanup, for recriminations and repercussions. Consider Boyd rocket-launching his daddy’s drug shipment in Season 1 or Arlo killing Trooper Tom in Season 3, both staged in penultimate episodes. “Trust” was the 10th hour of this season, and Justified is about out of breathing room. After three more hours, and once the race to leave Harlan County alive is run, whoever’s still stuck inside is stuck forever and whoever’s out is out for good. Time is speeding up and things are unspooling in a hell of a hurry.

Spending most of six seasons with the same set of Elmore Leonard characters can make them feel so lived-in that you forget the source material. Why are we ever rocked by turns in the plot? Of course the characters are all playing each other. By the end of “Trust,” if we’re counting right, we’ve seen antagonistic plot threads established between Raylan and Boyd, Ava, David, Rachel, and Markham; between Boyd and Ava, his own henchbillies, Katherine Hale, Markham, and the marshals’ office; and between Ava and Limehouse, just for garnish. (Did Limehouse’s appearance feel like a curtain call? Absolutely. Are we begrudging him that? We are not.) Relationships new to the show but years-long within the universe (Katherine and Avery) and comfortable longtime onscreen pairings (Wynn1 and Mikey) are being axed to bits, and even when telegraphed, their fracturings still carry weight.

The recent uptick in velocity, led by second-season heroine Loretta’s populist charge into Pizza Portal, is having a very specific effect on the show, that of feeling more connected to the world we live in now. Weed cultivation has been a plot driver ever since the pilot, when Boyd blew up Pastor Fandi’s church. Remember Raylan threatening Fandi with the knowledge of marijuana plants in his elderly landscaping clients’ yards, and watch his face in Episode 9 of Season 6 as Loretta, Raylan’s surrogate daughter, proclaims legal weed as the future of Harlan County in a room full of town elders, criminals, and lawmen. Justified is catching up to the world it hasn’t ever really seemed to inhabit,2 and it’s that convergence with reality that makes the sixth-season shockers land with such force. That gloss of artifice that always accompanies Leonard’s work, the fact that we know real people don’t talk like this (and that the characters seem to know that real people don’t talk like this), has always given this show set in the real world a certain distance from real life. But in the space of two hours, we’ve had three genuine and well-earned bombshells: Loretta’s pizza-party-crashing speech, Boyd’s inability to blow something up, and Ava’s gunshot. We’ve sincerely thought Boyd might be dead twice in two episodes now. How’s that for stakes?

But let’s talk about that gunshot, and what a fascinating moment it was for Ava even outside of being a jaw-dropper of a plot twist. Look back at her scene in the car just before, saying, “The thing about getting a man to do what you want, Raylan, it’s not so much what you say as how you say it. Or what you’re doing at the time.” That’s good insight, but we get the feeling that even Boyd, bleeding at his feet, will be unsatisfactory to Raylan. Because Raylan didn’t put him down properly, didn’t triumph against an armed and ready adversary.

Forget choosing between chasing Ava and co-parenting with Winona; will our hero be able to resist letting Boyd heal up again just so he can shoot him himself?

And as we move from 11 to midnight on the Crowder-Givens nuclear clock, remember how many times “we dug coal together” has saved a life in Harlan, and ruminate on what might be left in that well. Raylan’s minute in the car with Tim, in particular, has that sense of a thing that’s going to echo to the very end:

“You really think this ends in a trial?”

“What I mean is, you really think Boyd’s gonna take us in, instead of goin’ out in a blaze like the outlaw he spent his whole life trying to be?”

Is Boyd the only one who’s pretending? Is Raylan mad because he realizes that, or because he doesn’t?

We have only three episodes to find out.

Scared Senseless: The Indie Horror Boom and What Frightens Us Now

The Second ‘Entourage’ Movie Trailer: Sorry, Vin Diesel, This One Is Going to Win Best Picture