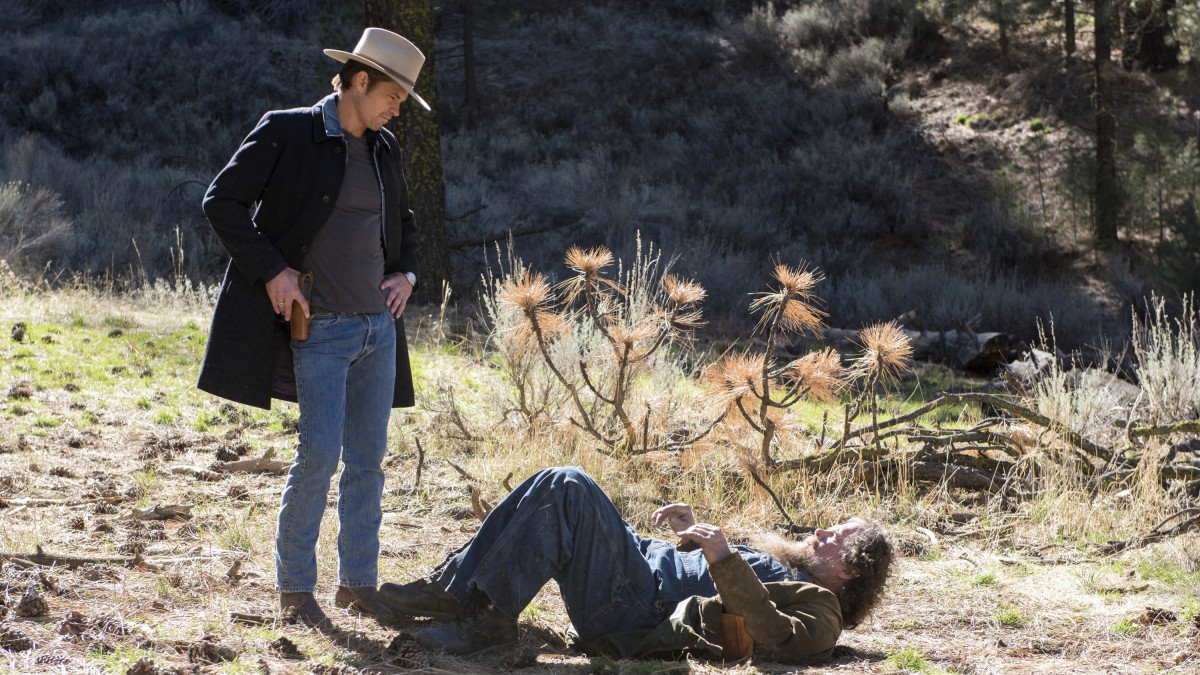 The penultimate episode of Justified, mildly titled “Collateral,” functions within the wider arc of the season as something of a comedown. Think of this hour as the ear-ringing exhale, a time to meditate upon the loss of Katherine and Mikey — and Carl, I guess — and to contemplate just what an utter havoc a $10 million hot potato can wreak on the lives of anyone even tangentially connected to it.

The Marshals service certainly isn’t immune. There’s a particular moment early in the episode that lands sort of awkwardly, and I think it might be intentional. It’s the last scene you see before the credits, Raylan’s badge and identification, all the shiny symbolic trappings of his position, lying seemingly abandoned on the front seat of a car. Tim and Art aren’t happy. We at home are not surprised. We shouldn’t be. Raylan himself will end up explaining why before the hour is up: He walked into this — this space where he’s just willing to flat murder Boyd — with no illusions about what it meant for him as a person. “I crossed the line with my eyes wide open,” he says. It wasn’t even a line by the time he got there, was it?

It’s not like Tim and Art are plotting a heist of their own to keep the Marshals between Raylan and Vasquez, but everybody’s suddenly got about nine times more patience with Raylan than maybe they should. Though, man, does Raylan need all the help he can get! Sure, dude, cast off the trappings of lawmanship and stroll into a living progress metaphor populated entirely with gun-toting hill people. Great plan! Migration is the heavy visual theme here, as it has been this entire season,1 and determination (if not necessarily burning desire) for a sea change has Raylan avowedly ready to shoot Boyd full of holes to get on with his life — he signs over Arlo’s house to a man who once wanted to stuff him into a mine shaft.

Boyd, obviously, is also not having a great week, shot at and half blown up in the space of one episode. But Ava. Oh, Ava. Ava’s as stuck physically as her menfolk are spiritually, and it is no end of frustrating to watch. Ava, with $10 million and a truck, forgot about the only useful thing Judith ever told her and ran straight to another man, even if he is kin.2 (Note here to Ava: GIRL. KEEP DRIVING. KENTUCKY IS NOT A SUPER BIG STATE. AVA, YOU ENORMOUS DOPEY UNICORN, YOU’RE NOT DEAD. YOU HAVE ALREADY WASTED THE BIGGEST HEAD START YOU’RE GOING TO GET, THE PART WHERE NOBODY BUT BOYD AND RAYLAN KNEW YOU HAD THE MONEY. GET WITH THE GODDAMN PROGRAM — whoops, too late, and whose fault is that?)

The reappearance of Constable Bob (who remains the worst) feels like the perfect punishment for Ava’s tarrying, but you know what would’ve been infinitely satisfying? For the 12 seconds or so it takes for Bob to walk from his door and realize his car has been stolen to be his only appearance, his final appearance on the show. That would’ve killed. But no. He goes gallivanting after Raylan, in some weird approximation of the way Raylan used to throw himself between Ava and trouble, and Ava takes back off down the road, distinctive hair and extremely obvious backpack swaying, and sticks to the road like an idiot. I kind of don’t feel sorry at all for her being turned over to Markham, honestly.

Because say this for Markham: Sure, he’s a horrific human being without the soothing balm of the Sam Elliott ’stache to soften his features, but the man has plans, damn it! I caught myself nodding along with Markham as he’s lecturing Katherine while she’s lying on a morgue slab. (No, you made it weird.) To his emotional credit, I guess: He does look sad when he says he has to go get his money. But he goes, and he’s still churning forward in this hour while everybody else is spinning their wheels on the stupid mountain; he’s working in the now with an eye toward the future, all but promising to make Loretta his consigliere.

“First time I saw you I liked you,” Markham says, and it might read like a dead-end threat to Loretta, but it’s really an admissions test. And the beautiful part is, you can’t even really see Loretta having to think too hard about what she tries next. It’s seamless. She appeals directly to his business sense. She has a marketable skill set. She has thought of just about everything. Markham says she reminds him of Katherine and Mags, and look where they are. But in the moment, she seems more like Boyd, with a plan that could actually work.

And let’s not part without an eye roll at a pair of adversaries as far on either side of the law as it is possible to be. Wynn goddamn Duffy, the designated Dixie Mafia cockroach, is shown professing to Vasquez his desire to leave town immediately, which is about when viewers at home should start to worry that he, of all people, might not actually live through this. Because right when he should be plotting his permanent getaway on a park bench3 … is he going after the money, too? BITCH, HE MIGHT BE. Yeah, never mind, Markham’s much-pursued stash may actually end up killing everyone on the show, but what a swell exit line “I have sensitive gums” would be.

And poor Vasquez. He’s a tiny disaster ball! Rick Gomez has done delightful, underrated work for the entire run of this series, and he should be infinitely more famous than he currently is. Vasquez is seething, and he’s got a good reason to do so, still on the trail of the killer of Simon Poole, but as in Justified’s earliest episodes, he’s poisoned by confirmation bias into thinking Raylan’s a dirty cop, rather than just a touch more violent than usual. And taking it out on Nelson? That’s just rude. That desk-clearing move had the look of something he’d always wanted to try but never had an excuse to.4

And while everyone else on the show is running themselves ragged looking for them, Raylan and Boyd are hanging out on a rocky outcropping in near-perfect dark, lying about just how serious they are about killing each other. Two lines of Boyd’s stick out as feeling like they’re going to be important later on: “You don’t know what’s in my heart. You don’t know what’s in your own heart.” Boyd doesn’t want to kill Ava, I don’t think, so much as he wants the whole thing undone, which means no matter what actually does end up happening, he’s not gonna be happy with the outcome. And how happy will Raylan be, even if he does get to put Boyd down? And vice versa? Does Boyd really want Raylan dead?

Let’s go back and count the number of times Raylan and Boyd could’ve each killed the other. What if at the end of it all, neither one can do it?

Detour of the Week: Shea Whigham!

Shea Whigham is on some kind of pan-entertainment-industry takeover since Boardwalk Empire wound down, a quest we should all fully support. He played Peggy’s boss in Agent Carter, dutifully rocking the weird postwar baby ties, and has got a new series coming up costarring one Walton Goggins. And his scenes in this episode are just phenomenal. Boyd can tell him the truth because he’s talking to a dead man, see! Somebody gets to talk back to Boyd before being shot to death by Boyd, and it’s been a minute since that happened. Boyd likes to shoot his cohorts before they have a chance to make him regret his choices. Look how hard he takes it when he has to think about it. When he can’t look away from it. Look how Whigham looks like he’s lived in Harlan all along. Great seeing you, man. Sorry about your truck and skull.

Questions That Burn Like a Freshly Lit Dynamite Cummerbund

• To what end is Markham still pursuing this whole bluegrass empire, though? Does he still really want to be a country baron without Katherine to share it with?

• Seriously, how many more times can Raylan and Boyd lie about having just accidentally not killed the other? Room for at least five or six more in the finale, right?

• How can it get worse for Nelson before the end of this? They’re gonna try to make it worse, right?

• How in the hell did Duffy get the bracelet INTO the toothpaste tube? I HAVE TO KNOW.

“Fire in the Earholes”