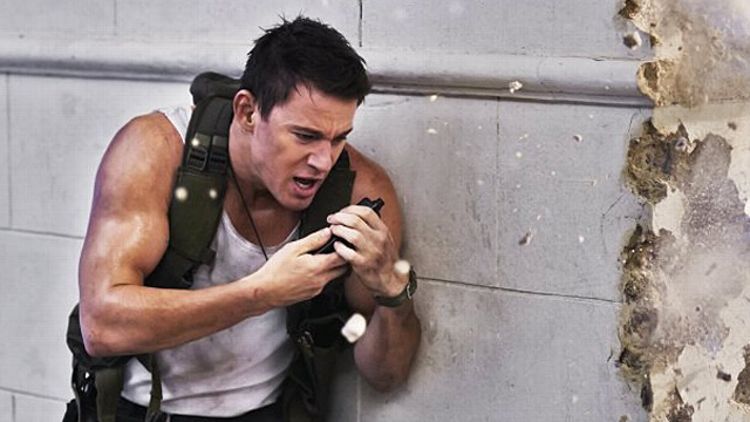 If you were intrigued by the recent VOD release of Olympus Has Fallen but wished it had been helmed by someone with a longer track record in the disaster genre and starred two of our most square-headed movie stars, good news! Here comes White House Down.

Roland “Independence Day” Emmerich directs the tale of John Cale (Channing Tatum), a U.S. Capitol cop assigned to the Speaker of the House (Richard Jenkins) who’s hoping to make a jump to Secret Service agent. Unfortunately, his White House interview with former college “friend” Carol (Maggie Gyllenhaal) doesn’t go well because she still remembers the worst of him from the old days; even more unfortunately, while he’s there (and his daughter is taking the tour), terrorists break in and start wreaking havoc. Fortunately, John has more tactical know-how than you might think, and springs into action, finding the president (Jamie Foxx) and joining forces with him to find the incursion.

As the second “White House under siege” movie of summer 2013, White House Down seemed like an also-ran next to Olympus Has Fallen, but having seen both, I can tell you with authority that this one is much more stupid fun. (And much more stupid, but maybe that’s what you’re in the mood for.) If that’s not enough to sell you: Tatum doesn’t stay in his suit jacket and dress shirt for long.

Wesley Morris: “Every time [the protagonist’s daughter] Emily says the words ‘you’ or ‘tube,’ I want to shoot her, which makes me more heartless than the terrorists, since this is the sort of movie where the baddies can bring themselves to kill just about everybody but her.”

The rapid evolution of the American job landscape and the plight of the long-term unemployed are very serious and timely issues worthy of in-depth investigation, so don’t worry: Vince Vaughn co-wrote and starred in a comedy about them.

Vaughn and his Wedding Crashers co-star Owen Wilson re-team to play salesmen who lose their jobs when their company goes out of business, and decide to bounce back by taking internships at Google, because that’s a thing any idiot can do and isn’t competitive at all. That it features an Asian character named Yo-Yo probably tells you everything you need to know.

Wesley Morris: “The comedy here is supposed to come from the competition for permanent employment with entitled freaks and geeks half their age, and in that regard it’s a lousy sitcom that doubles as one of the most shameless commercials I’ve ever seen.”

Because Grown Ups left so many questions unanswered for its devoted fans, Adam Sandler has co-written and produced this sequel. The other three bros who play his high school bros — Kevin James, Chris Rock, and David Spade — return, along with the improbably stunning women who play their love interests, in a story that finds all of them back in the suburban town where they grew up (using that phrase in the loosest possible manner).

There was a time when I really enjoyed Adam Sandler’s movies — specifically just Billy Madison and Happy Gilmore, if I’m being really honest; no one would claim they were especially smart, but at least they had inventive weirdness on their side. Grown Ups 2 opens with a deer somehow finding its way into Sandler’s character’s bedroom and spraying the whole room with urine, so … inventiveness is something Sandler has grown out of, I guess.

Wesley Morris: “For all the writing Sandler did with Tim Herlihy and Fred Wolf, for as close to intergenerational farce as the film gets, what you feel is laziness. You feel the somewhat dismaying acquiescence to middle age while behaving as if adolescence never ended.”

The Way Way Back

Oscar-winning screenwriters Nat Faxon and Jim Rash (The Descendants) co-wrote and made their feature co-directing debut with The Way Way Back, the story of Duncan (Liam James), an unhappy teenager getting through a beach vacation as morosely as possible.

The cause of Duncan’s distress? His mother (Toni Collette) has started dating a jerk who says — in front of her — that he thinks Duncan, on a scale of 1 to 10, is a 3. Said jerk is played by Steve Carell, spectacularly yet chillingly believably against type; his Trent is cringingly awful enough almost to obliterate his many Michael Scott years. Eventually, Duncan finds his place in a job at a local water park, where we meet Owen (Sam Rockwell), who seems like he might be the first real friend Duncan’s ever had, and where a depressive Lewis (Rash) steals every scene.

Wesley Morris: “Faxon and Rash are good comedic actors and they’ve said there’s some autobiographical material in their script, but this movie couldn’t feel less examined. No one seems to realize that Duncan and Owen have fallen into a kind of love that makes the scenes with [Maya] Rudolph and [AnnaSophia] Robb feel defensive and the ones between James and Rockwell feel illegal. And yet the deepening of that friendship provides the movie with its only genuine emotional tension.”

Parkland (named for the hospital in Dallas to which JFK was rushed after he was shot) features — get comfortable — Colin Hanks and Zac Efron as doctors; Marcia Gay Harden as a nurse; Jacki Weaver as Lee Harvey Oswald’s mother; Tom Welling and Billy Bob Thornton as Secret Service agents; and Paul Giamatti as Abraham Zapruder. In a fun nod to the nerds out there, JFK alumnus Gary Grubbs also appears (as a doctor). But note that the film’s director has declared that it doesn’t address assassination conspiracies at all, so if that’s your jam, you should watch either JFK or any of the approximately 700 TV specials marking the event’s 50th anniversary this month.

How far can you push an ethical martial artist before he breaks and turns on everything he believes in? Donaka Mark aims to find out!

Keanu Reeves — in his directorial debut — plays Donaka Mark opposite Tiger Chen’s … Tiger Chen in Man of Tai Chi. Tiger starts out as an upstanding student of Tai Chi, quietly winning televised martial arts competitions, before coming to the attention of Donaka Mark and being tempted to fight for the wrong reasons (mainly just money, but also the thrill of being given license to beat people nearly to death). Before long, Tiger learns that there is more to Donaka Mark’s operation than first meets the eye. The fight scenes are pretty thrilling (and really violent), and Reeves is obviously having lots of goofy fun; you probably will too.

Available the same day as its theatrical release, The Motel Life stars Emile Hirsch and Stephen Dorff as brothers living paycheck-to-paycheck in cheap motels. Their not-great lives get even worse when Jerry Lee (Dorff) gets into a hit-and-run and the two have to flee the area or risk his arrest.

A motif running through the film is the brothers’ penchant for storytelling: Frank (Hirsch) makes up the plots and Jerry Lee illustrates. The film brings these stories to life with sketchy animated sequences, which parallel the story unspooling in their real lives.