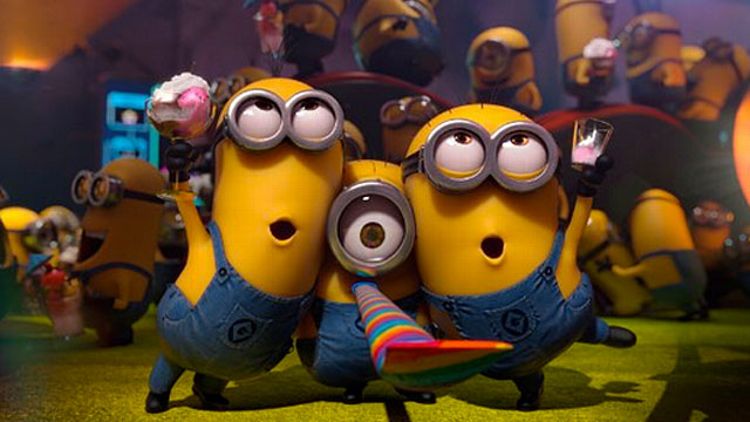 In Despicable Me, Gru (voice of Steve Carell) was moved to give up his supervillainy after succumbing to the charms of the three adorable orphan girls he adopted. But just because Gru has given up crime doesn’t mean he has given up scheming and intrigue.

Despicable Me 2 finds Gru being recruited by the Anti-Villain League to help investigate the theft of a top-secret lab, because who better to catch a supervillain than one who may be reformed but still knows how bad guys think?

Assisting in his efforts is Lucy Wilde (voice of Kristen Wiig), Gru’s recruiter and handler. As his girls get to know Lucy, they start to dream about what it might be like if they had a mom like her, and without getting into specifics, you may see where that part of the story is going just a bit before your kids do.

Just in time for his new postmodern variety series Hit Record to hit upstart cable network Pivot, Joseph Gordon-Levitt’s feature writing/directing debut comes to VOD. Now we have so many perspectives from which to judge his talent!

When it comes to award bait, movies about addiction are usually pretty reliable. Nicolas Cage played a tragic alcoholic in Leaving Las Vegas and won his first (and, given what he did afterward, possibly only) Oscar for it; there’s also Denzel Washington in Flight, Ryan Gosling in Half Nelson, Christian Bale in The Fighter, Eddie Murphy in Dreamgirls, Marion Cotillard in La Vie en Rose, etc.

Thanks for Sharing tries to do for sex addiction what all of those did for substance abuse. It even put its thumb on the scale in the form of not one but two Oscar-winning actors (Tim Robbins and Gwyneth Paltrow) and an Oscar-nominated screenwriter (The Kids Are All Right’s Stuart Blumberg) both writing and making his directorial debut. But not even those bona fides could carry it to any award nominations this year. Is it that P!nk and Josh Gad kept viewers from taking it seriously? Or is it just impossible to regard Paltrow as one of her generation’s greatest actresses in a post-Goop universe?

When the time comes to attend your rich fiancé’s family reunion at a remote country house, there are a lot of reasons to have your guard up. Don’t say anything that will make his parents think your motives in the relationship are less than pure. Make sure you’re always using the right cutlery for each dish you’re served. And be careful of the masked murderers who just killed the people next door and are now coming after you and everyone else in the house.

From The Texas Chain Saw Massacre to Friday the 13th to The Strangers, horror movies can’t stop reminding us to give a wide berth to anyone in a mask, and You’re Next is part of that proud tradition. Where it breaks new ground is in letting today’s young people know that no good can come of dating a guy named Crispian.

In case you’re in the mood for a horror film but feel like something a little more familiar, there’s Insidious: Chapter 2. Not only is it a sequel (to 2011’s Insidious), it also stars Patrick Wilson, most recently seen in this summer’s surprise horror hit The Conjuring.

In the latest chapter in the Insidious saga, Wilson returns as Josh Lambert, who’s had a strange connection to the spirit world since he was a kid. Now an adult, Josh is plagued once again by a ghostly figure who used to appear in photos of him in his youth, and who has returned to come after his wife and family.

Has there ever been a better time to be a tween who wants to stay conversant with their friends’ literary obsessions but hates to read? After the success of the Twilight adaptations, any YA novel series is apparently a candidate to be turned into movies, including ones no adult has ever, ever heard of.

This is a sequel to a movie you’ve never heard of, revolving around Percy Jackson — son of a Greek god and therefore a demigod himself — and the adventures his semidivine powers get him and his similarly endowed friends into. I’m not saying the sequel is an afterthought, but not only doesn’t Poseidon return for his own kid’s story, but the roles of Hermes and Chiron have both been recast. Still, if I were being forced under duress to watch either this or that Mortal Instruments movie, I guess this would be my pick.

A couple of decades ago, when a young Hugh Grant was just starting to get famous in America thanks to Four Weddings and a Funeral and was getting interviewed by everyone, one of the stock questions he got asked a lot was what he did with himself before achieving stammering stardom. His stock answer was that he appeared in a lot of movies he had dubbed Europudding, “where you would have a French script, a Spanish director, and English actors.” It’s a quote that leapt to mind as soon as I saw the trailer for The Best Offer.

Available on demand simultaneous with its theatrical release, The Best Offer is written and directed by Giuseppe Tornatore (Cinema Paradiso), set around Europe (primarily various locations in Italy but also Vienna and Prague), and stars Australian actor Geoffrey Rush as the director of an auction house. Called upon to deal with the art collection bequeathed to a reclusive young heiress, he finds himself at the center of a mystery. And, I guess, just to keep it from being Europudding in every possible respect, Rush’s friend is played by Donald Sutherland … a Canadian.