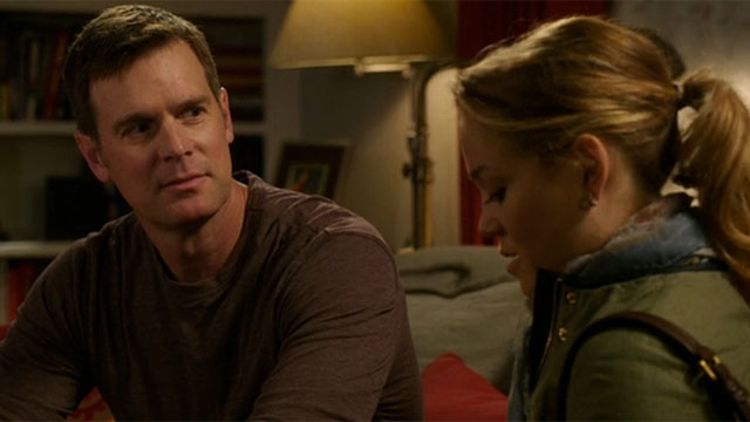 Based on last night’s episode of Parenthood, the Bravermans are in serious need of New Year’s resolutions. The clan is picking up right where we left off in 2013. The previous, shorter seasons reliably sailed through plot arcs, with each premiere feeling like a reset. This season is not only short on tears, but on forward motion as well. Last night, Drew’s ex-girlfriend reentered his life, Sarah found herself in another love triangle, and Julia and Joel are stuck in a marital morass. On the other hand, though, there was quite a bit of knocking on, opening of, and closing of doors. If only that were a better metaphor for how the season was moving.

Drew Holt is living the dream. Ex-girlfriend Amy came to visit, seeking refuge from the cold winter weather at Tufts in Massachusetts. Of course, this is unwelcomed by current friend-with-benefits Natalie. Love triangle alert! The three of them lounge on one of UC-Berkeley’s grassy fields. Natalie tries to stake her claim by hanging on Drew while Amy is just glad to be lying out in the sun. There’s no way of knowing what month it is on Parenthood right now, but if Amy’s complaining about her East Coast winter wardrobe, it’s fall or winter. It’s probably not warm enough for her to comfortably lounge in just a tank top in Northern California. Although, anyone who has been to college knows that guys love to wear shorts and girls will take just a single hour of sun as an excuse to lie out. Regardless, this inconsistency is not enough to incite tears of rage. The problem is more global.

Parenthood writers, I know you can do better than this. Last season, Drew and Amy were confronted with teenage pregnancy, and she made a brave and devastating choice. Now their only challenge is a misguided hallmate who too predictably clings to Drew when another girl shows up. I’m thrilled to see Drew getting attention, but this kid has already been given more depth. Why is it so hard to depict the college experience with emotional accuracy on television? And please get him a haircut.

Crosby was only tangentially related to the show last night, but he costarred in my favorite moment. Early in the episode, Julia goes to Adam to talk about her problems with Joel (more on that below), which prompts Adam to enlist Crosby to help protect their little sister. Season 5 is suffering from a dearth of Braverman family events, so we’ve had few chances to watch the adult siblings interact. When Crosby and Adam are together, they’re usually at work. This very small moment was a reminder of the important relationships upon which the whole fictional universe is built. Often Adam’s seriousness is misplaced and self-serving. But this time, Adam will make you wish you had an older brother.

A problem isn’t real until an uninvolved Braverman gets pulled into the drama. This week, Julia escalated her ongoing static with Joel by turning to Adam for advice. She showed up at his house supposedly to ask for a favor, but she really just needed the eldest sibling’s comfort, and it turned into Parenthood gold. Adam defaulted to his preferred mode: wise sage. He attempts to wear this hat with his wife and kids, but the performance is far more earnest with his siblings as the audience. I know Parenthood has succeeded when an episode leaves me wishing I were a Braverman. While Julia’s current, tortured state is hardly desirable, Adam offered noble advice with a light touch that I forget he’s capable of. The real moral of this scene, though, is that we need Adam, Sarah, Crosby, and Julia to appear together. Those relationships are compelling and unique, yet the show has hardly explored them this season. It would certainly be richer than watching yet another love triangle for Sarah.

This week, for the first time, I wondered if Joel and Julia might really separate. They attended a fundraiser for their kids’ school, and Joel punched The Other Man, Ed Brooks, with shades of The O.C. (Crosby failed at his mission to protect Julia. Oh, Crosby.) After, Joel and Julia are outside, and for the 7,000th time this season, Joel walks away. The heartbreaker, though, was when he asked, “Are you sober? Are you sober? Can you drive? Are you safe?” Those are not the questions of a madman. He’s not outraged, he’s not incensed. He’s deeply angry, yet still sensible enough to prioritize safety. And despite Julia claiming that nothing has happened between her and Ed (which is not true), he says he doesn’t know if he can believe her. These two are a complete mess.