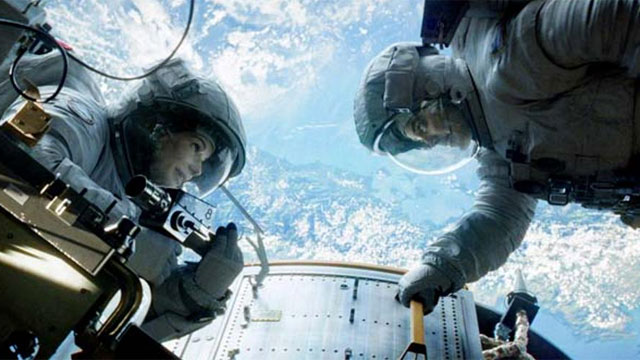 What happens when a cloud of debris engulfs the Hubble Space Telescope? Short answer: nothing good.

Sandra Bullock stars as Ryan Stone, a medical engineer making her first (and maybe last) trip to outer space. She’s servicing the telescope when she and her colleagues are informed that Russia struck an old satellite with a missile, which has caused a chain reaction, including debris coming right at them. They’re told to abort the mission, but there isn’t time, and before long Ryan has been detached from her shuttle and is spinning through space. And things kind of just keep getting worse after that.

Alfonso Cuarón (Children of Men) wrote the screenplay with his son, Jonás, but had to wait years for film technology to catch up with their script. It’s an incredible visual achievement, though you, like me, may find yourself watching in fascination at exactly what they did and realize the story is leaving you a bit cold.

Wesley Morris: “Gravity never stops moving (there’s often some object hovering in the camera frame), but when things slow down you’re free to wish the human action were as emotionally stirring as the material chaos is thrilling.”

Irascible retiree Woody doesn’t seem like he’s had a lot to live for in recent years. So when he gets a notification letter informing him that he’s won a major sweepstakes prize, he sets off to Nebraska, where the letter originated, to claim his award. He can’t drive anymore, so he starts walking. And since he lives in Montana, it’s going to take a while.

Alexander Payne’s latest film is a multiple Oscar nominee (including Best Picture) and features Bruce Dern as Woody, for which he’s received a Best Actor nomination. Will Forte breaks from type to play David, the son who volunteers to drive to Nebraska with Woody, even though he, like the rest of Woody’s immediate family, is pretty sure Woody hasn’t won anything. It’s lovely and sad and sweet and will definitely make you want to call your dad and tell him you’re glad he’s nice and keeps track of his teeth.

Wesley Morris: “Nearly all the laughs come from the tension between a presumption of Midwestern mildness and the parade of caustic people we meet.”

Have you been waiting for months to see the film that closed prestigious film festivals in both Morelia AND Cork? Wait no more!

Written by Cormac McCarthy and directed by Ridley Scott, The Counselor stars Michael Fassbender as the eponymous Counselor, a lawyer who falls in with a bad crowd ( … drugs) and meets a lot of colorful characters ( … including a lady who makes love to the hood of a car).

Wesley Morris: “The prevailing sense of preordained hopelessness, death, and doom are standard McCarthy. He and Scott are not afraid of the ridiculous, the symbolic, the telegraphed, or the literal.”

Blue Is the Warmest Color

High school student Adèle is leading an unexamined, carefree, typically boy-crazy life, until a chance encounter with a blue-haired woman leads her to question everything. Before long, she’s making a test visit to a lesbian bar … where she runs into the very same woman again, and starts a passionate affair.

Blue won the Palme d’Or at Cannes and was nominated for Best Foreign Language Film at the Golden Globes, though its reception has been sharply divided. Some have been moved by the portrayal of the couple’s relationship; others have complained about the exploitative sex scenes … and the three-hour running time.

Nerdy fans of British comedy and/or regular fans of Veep and The Thick of It creator Armando Iannucci have been eagerly anticipating the arrival of Alan Partridge: Alpha Papa on these shores, by which I mean that when I saw this title at the top of the list of this week’s new releases, I gasped aloud and called my husband into the room to see.

Renamed for American audiences (and available on demand here in advance of its theatrical release), Alan Partridge is the feature film adaptation of I’m Alan Partridge, a sitcom series created by Iannucci and starring Steve Coogan (most recently of Philomena) in the title role. Alan is a former TV presenter who’s had a few career setbacks and ended up in a poor time slot on a provincial radio station, none of which has put a dent in his grandiosity or misplaced self-regard. The movie probably has a story. I don’t know what it is. It doesn’t matter. I’m going to rent it right now.