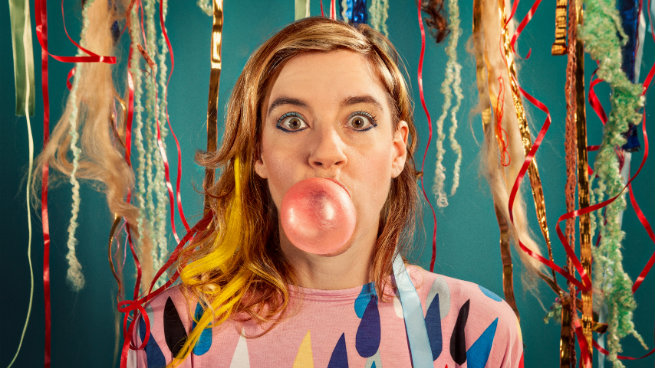 A couple months ago, I attended a truly weird listening party for Merrill Garbus’s third LP, Nikki Nack, which is out today on 4AD. The album had not been officially announced yet, no tracks released, nothing, so when I was informed that I’d be spending the evening in a room with Garbus and a bunch of journalists and industry folk, I went through a minor time warp. To tell the truth, I hadn’t thought about Tune-Yards in a second, save perhaps for a well-placed cue of “Gangsta” on an episode of Orange Is the New Black last summer. This isn’t to say I wasn’t a fan; w h o k i l l was one of my favorite and most listened to albums of 2011. It’s just that a lot of stuff had passed through my brain since then, as is wont to happen when you’re a human, much less a human spending most of your waking hours in front of a computer with access to an endless supply of Best New (and Best Old, and Worst Old) Musics. Nothing contemporary I like now really resembles Garbus’s ecstatic, loopy world-pop. There’s always some nervousness when an artist you like releases new material; I was actually not sure if Tune-Yards was still an artist I liked.

It turned out to not be a big deal, because that night I could barely hear the music anyway. The gathering was set in an (open) bar, and began with a welcome from Garbus, who talked about the years she had spent after her second album blew up, taking “singing lessons with a Broadway belting coach” and traveling to Haiti to study drumming and dancing. “I believe I also grew emotionally and spiritually as a human being,” she stated politely, then paused with a little self-conscious laugh. The crowd hushed for the length of the opener, the punchy anti-writer’s-block anthem “Find a New Way,” before dissolving into chatter, as if we were all there to see what the new Tune-Yards sounded like as background noise after three glasses of cabernet.

But “Find a New Way” was door-busting enough to whiplash me right back into everything I liked about Garbus’s music. After a somewhat muted opening, we get the first big gust of Merrill-voice: “And NOOOOOoooow … ” Ah yes, I remember. Nobody else on the planet sounds like this.

Superficially, Nikki Nack isn’t a very big deviation from everything that perked up our ears on w h o k i l l, but the opener can’t help but contextualize it in the wake of the love affair the critical blogosphere had with Garbus in 2011. It’s right there in the first verse: “I tried to tell him all the reasons that I had to never sing again.” At the listening party, Merrill, her voice tinged with a waver that is nowhere to be found in her music, talked about her post–w h o k i l l creative crisis. “At the end of touring [for] the last album, I think I felt kinda burnt, and I wasn’t sure if I wanted to be a musician really anymore.” She paused, smiling broadly. “And [now] I really do.” She doesn’t say it outright, but the pressure must have been immense after the chorus of the Internet declared she could do no wrong. On “Real Thing,” she’s more direct, spitting out the titular label with more than a hint of mockery, over a rebelliously sparse bass line. w h o k i l l saw Garbus filtering a wealth of social issues through her eclectic soundboard (as on the nightmarish free jazz of “Riotriot”); now she’s filtering them through her elevated profile as well.

At the listening session, after having taken advantage of the beverage service, I found Garbus near the back of the room. We talked about the weirdness of debuting a year’s worth of work to a room full of drunk people and the development of Nikki Nack in an abandoned train car outside her current home city of Oakland. I might have made some not-quite-thought-out Yeezus comparisons. When I let slip where I worked, her eyebrows raised with some wry recognition, nothing more. My main takeaway was that Garbus is an extremely easy person to talk to, which should come as no surprise; for all the occasional erraticism of her music, there’s always the warm center of a vocalist and lyricist who is both earthbound and imaginative, muscular and vulnerable. Those are prerequisites for the longevity of a musical career; written out, it now occurs to me they bear more than passing resemblance to qualities in the most successful rappers.

And as I descended to the floor midway through the band’s show last night in Los Angeles, the resemblance continued. Granted, I had picked “Manchild,” a lean-inducing jam that invokes, of all things, a clear “no means no” stance against unwelcome wandering hands on the dance floor, as the song to stretch my legs for. But I watched as the room got about as down as you could imagine a Tune-Yards show getting; there was definitely some grinding happening a few feet away from me. Above all, what one realized was that most of the people in the crowd knew this song, and knew it was the one they wanted to grind to, ostensibly from it being available to stream on NPR for the past few weeks. After “Water Fountain,” the lead single off Nikki Nack, Garbus said, “So it seems like some of you have heard that one,” to which a guy in the crowd replied on cue with a battle cry of “WOO-HA WOO-HA!”

In the chapel-like setting of the Masonic Lodge at the Hollywood Forever cemetery, the rest of the show took on a feeling of a rowdy, slightly psychedelic camp talent show, Garbus’s looped howls echoing up into the rafters as her backup singers engaged in some perfectly awkward not-quite choreography. “This reminds me of a petri dish,” Garbus said between songs at one point. “Not because it’s so hot and steamy … but because a lot of this is an experiment.” It may look that way on stage, with Garbus, decked out in feathered regalia and face paint, twiddling knobs and futzing with her looping pedals as she built each song live with her band, but the sound was fully formed. The slow-burning “Powa,” off w h o k i l l, took an especially long time to build, but proportionately reached the highest highs of the evening, with Merrill wailing over the unabashedly sexy beat like Prince with a ukulele.

Nikki Nack will ably remind the people who were already on Garbus’s team what they liked about Tune-Yards, as will their live show, which slays just as much as you’ve probably heard. And hopefully both do something to deepen appreciation for the incredibly complex, thoughtful songwriter at the center of the Day-Glo fray. The longer you spend with Garbus’s music, the more you appreciate how absent it is of shtick, even as it wears its idiosyncrasies on its sleeve. Maybe the pedals and feathers aren’t for you, maybe they look like the physical manifestation of the niche-ification of blog rock. But even especially — if you close your eyes and turn off your Wi-Fi — Merrill Garbus still is the real thing.