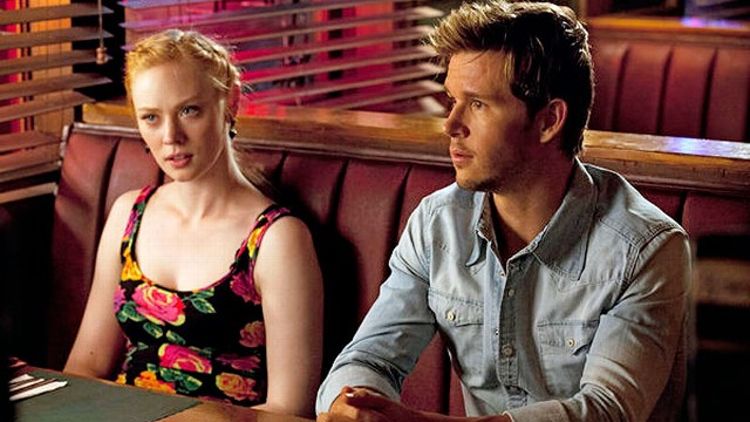 When Sookie Stackhouse stops getting laid she turns into a murderer. Her single-girl Sunday-night meal of Chinese takeout in pajamas is interrupted by a rude late knock from Mike the coroner, who turned into a vampire sometime during the season he spent offscreen. Sookie unsuccessfully shoots him, and then stabs him with a chopstick so that he collapses into a pile of carmine goo. Sure, it’s self-defense — but it’s also second nature to the increasingly criminal Sook, who ought to head southwest and give Walter White a run for his meth money (or at least a competitive rate on fairy blood).

At the Authority, Molly is given one last chance to accept Lilith as her god. She declines with a petulant Gen X sneer, and is slain by the self-staking device she invented. Steve Newlin and Russell continue their fan-favorite character romance. Hoyt rides shotgun with his overbearing mama and announces that he’s moving to Alaska to look for oil and help True Blood drill for new love triangles. At Fangtasia, everyone’s other new fan-favorite power couple, Tara and Pam, are being lectured by Azrael Abyss Prince of Sorrow on the possibility of installing peep show glory holes in the club, the better to attract J.Lo’s boyfriend with. Pam’s stylist has once again taken her to a dark corner of the ’80s.

Frank Sobotka mops up the remaining vamp hash and tells Sookie not to worry about killing a vampire, since they’re not considered full people. Plus, coroner Mike might have been a necrophiliac, which is apparently a beyond-the-pale sexual fetish in Bon Temps, a place where humans regularly boink canines and the undead. Bill doses up on Lilith blood and then forces a few drops down the weakened Eric’s throat with Nora’s help. Roger Sterling runs in and asks why they didn’t wait for him. Eric and Nora have a double vision of their maker Godric getting macerated by their naked god. (I know Lilith is supposed to be deeply menacing, but all I see is a frowning naked gal covered in overripe strawberry pulp.) Eric finally succumbs to her jammy Satanic majesty.

Russell and Steve Newlin slow-dance to Katy Perry at a frat after running a blood train on the former brothers. Sam chases the last of Jessica’s would-be assailants out of Merlotte’s. Jason gets fryolated in a light denim shirt much like the one Sookie had on earlier. Are denim work shirts part of the Stackhouse family fairy crest? Tara and Pam go back and forth on the batch of baby vamps they were ordered to make. Pam insists you should drain because you really want to, not just to please somebody else or prove you can. If they must abandon Fangtasia, they will “live in the wind,” according to Pam. Hopefully that means a spinoff in which Pam and Tara hop trains and avoid getting staked by stray rail spikes.

Jason and Jessica have another awkward post-breakup/Jason shooting Jessica in the head conversation that only gets worse when they realize they’re both there to meet Hoyt. Hoyt tells them about his plan to move to Alaska, which is actually a decent idea! Get the hell out of Bon Temps; nothing good ever happens there. “So long, Hoyt. You were a decent man and TV character.”

Sookie and Jason hang out at Gran’s house and geocache an ancient fairy scroll hidden underneath the floorboards. Sookie is rocking a Brenda Walsh castoff long-sleeved floral jawn. Sam and Luna plot ways to rescue her daughter back from being Steve Newlin’s pound puppy. The linguist Sookie consults informs her that the fairy scroll must be a hoax because the vellum is old but there are 300 non-repeating glyphs rather than letters making up words. “This is just a set of hundreds of unique squiggles,” says Professor Sillybeans. The professor is clearly a fraud, because he claims no human language has that many glyphs, but there are over 100,000 Chinese characters.

Frank Sobotka and Holly the witch have a romantic dinner at Merlotte’s, because there are no other restaurants in Bon Temps. Lafayette has apparently bounced back from his boyfriend dying, like, the day before yesterday and is back to slinging steaks and sassafras. Steve Newlin serves face and lies to conservative vamp-fearing Congressman Finch on TBBN while Russell swoons at home. Eric pledges his allegiance to the cult of femininity. Sam and Luna search for Emma in Steve Newlin’s dressing room. I laugh whenever the actors on True Blood are forced to deliver serious dialogue buck-naked, which is really quite often.

Jason pulls over Hoyt and is horrified to find that Hoyt really no longer recognizes him or remembers their lifelong friendship. He breaks down in the car realizing that poaching his best friend’s girl may not have been worth it after all, and that now he has neither the girl nor a best friend. Feels like it’s been so long since anyone said Sookehhhhhh …

Jessica is summoned to The Authority by a creepy-acting Bill, who tries to explain his quick and thorough conversion to Scientology-I-mean-Lilith. She gets a little freaked out by all his evangelical talk and looks all set to be the Final Girl who saves the world from vampire apocalypse. Tara mounts a prank to save Fangtasia, murdering Azrael and impressing Pam. She also gives a groan-inducing shout-out to Butterfly McQueen.

Steve Newlin likes Emma as a puppy but not as a recalcitrant human girl. Russell, drunk on power and Steve Newlin’s love, declares that he wants to walk freely in the sun. The other Authority vampires think this is a little crazy even though they are all taking orders from a gore-draped supernatural cam-girl. Russell vanishes in search of fairy blood and endless Florida sunshine. Found in the wreckage of Oceanic Flight 815.

Sookie and Jason bring the fairy scroll to the horrible fairy burlesque club, where a bosomy pregnant fairy reads it for them and tells them it says that their Stackhouse family descendents sold Sookie’s soul for a plate of magic dinner rolls. Maybe that explains Sookie’s unnatural charms with men.

Will the vampire war on humanity launch without a hitch or will infighting end it before it begins? Will Jessica move to Alaska in the hopes of meeting Hoyt again? Will the linguistics professor lose his job? Will the fraternity lose its charter? Will Sookie get laid or will she be forced to kill again? Only two episodes left to find out.