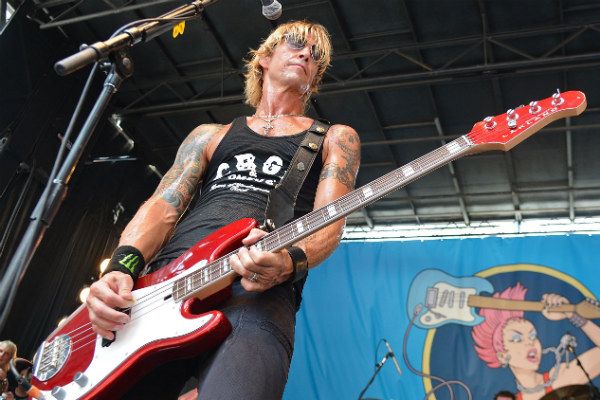 Only four years separate the release of Guns N’ Roses’ first full-length record, 1987’s Appetite For Destruction, and Pearl Jam’s 1991 debut, Ten. But in the narrative of rock history, these albums represent signposts for completely different eras; 20 years ago, GN-effin’-R  and Pearl Jam might as well have existed in different dimensions. Time, however, has a way of erasing such distinctions. Today, Appetite For Destruction and Ten reside in the same general vicinity of reassuringly familiar classic rock. That one comes dressed in coke-splattered scarves and the other in bong-saturated flannel has been obscured by the sands of time.

Since these records already co-habitate comfortably in the popular consciousness, it makes sense that members of Guns N’ Roses and Pearl Jam have finally gotten around to playing in bands together. Blabbermouth reports that ex-GNR bassist Duff McKagan and Pearl Jam guitarist Mike McCready are collaborating in a new band called Walking Papers. The Seattle-based group, headed up by former Screaming Trees drummer Barrett Martin and local singer Jeff Angell, describes itself (somewhat inauspiciously) on its Facebook page as “blues-rock,” and its forthcoming record, due in October, as a collection of “individual stories, but taken together as a whole, they tell a much larger narrative that conveys the tales of wandering souls, the collisions of will, and the dark beauty of the American heart that is ever searching for truth and meaning in a collapsing world.” You know, like GNR’s “Illusions” song trilogy, but with a dash of Pearl Jam’s “Jeremy” video.

McKagan is listed as the band’s bassist, while McCready is slotted in the “special appearances” section and credited simply with “guitar solos” — ironically, a far more Sunset Strip-y contribution, as it turns out. Eagle-eyed ’90s rock aficionados will notice that McCready last played with Martin (as well as late Alice In Chains singer Layne Staley) in Mad Season; Above was released in 1995, and featured the incredibly okay single (and late-period grunge sorta-classic) “I Don’t Know Anything.” (Mad Season fans, take note: A new record is supposedly on the way with vocals by Mark Lanegan, which somehow makes a new Mad Season record in 2012 at least slightly compelling.) As for McKagan, his roots in the Seattle music scene are well-documented, with a history of playing in area punk bands going back to the early ’80s. You can hear Walking Papers’ incredibly okay new single “Your Secret’s Safe With Me” here.