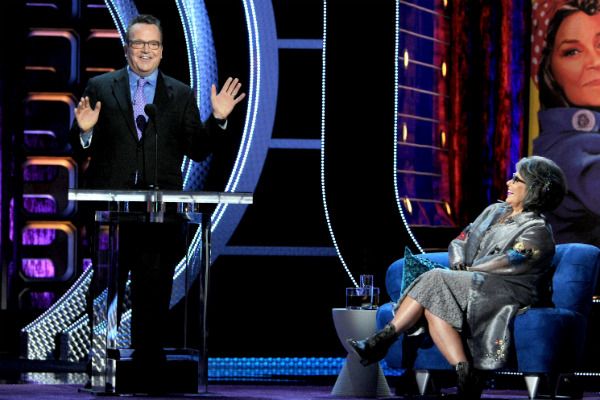 According to primary source Tom Arnold, it’d been eighteen years since he and his ex-wife Roseanne Barr were in the same room together. During Comedy Central’s Roast of Roseanne, they reunited in appropriate fashion: Arnold showed up, as a surprise show closer, to offer up a couple of words in tribute. He played ball with the spirit of the proceeding, explaining that when “Rosey” got “Property of Tom Arnold” tattooed on her hip, that made him “the fourth largest property owner in California.” Mostly, though, he was really sweet. He told the story of how they met, at a comedy club; Roseanne complimented Arnold’s set, and they ended up stealing the MC’s car and doing a bunch of blow. He also recounted how Roseanne slayed during her appearance on Johnny Carson, even earning the rare privilege of being invited to sit on Johnny’s couch. And then Tom said, with sincerity and emotion, that “Rosanne, you were my Johnny Carson. Thank you for the thumb’s up, thank you for allowing me to sit on your couch for a little bit.” Awww! You know, I think that if I ever become a controversial sitcom star and then marry and bitterly divorce a fellow oft-mocked comedian, I’d like our decades-in-the-making nationally televised moment of conciliation to go down just like that.