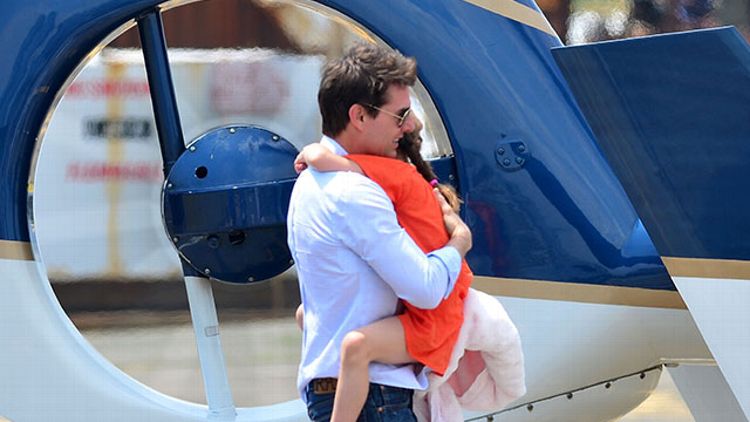 How do you get Tom Cruise mad? Question his parenting! Cruise recently emerged from his fortress of solitude to sue In Touch for its cover story “Abandoned by Daddy,” which posited that Cruise had not seen Suri in eons. Cruise has long made a habit of suing tabloids for defamation. In 2003, he won $10 million in a lawsuit against gay porn star Chad Slater, who told a French tabloid that he’d wooed Cruise away from Nicole Kidman. In 2001, he filed a $100 million lawsuit against publisher Michael Davis, who claimed to have a VHS of Cruise having gay sex. The lawsuit was dropped when Davis admitted the videotape didn’t exist and made a statement on the record that Cruise “is not and has never been homosexual.” It’s strange that a star as big as Cruise would sue these rags, especially when they’re on the hard respected level of In Touch. If anything, it adds a touch of Streisand effect to the rumors. Why create smoke where there’s no fire? But if Cruise bristles about stories of his sexuality, he gets downright livid when his parenting is called into question. Nobody has been sued yet about those rumors that his ex-wife Katie Holmes hooked up with Jamie Foxx in the Hamptons over the summer, maybe because it’s a scenario so random it seems like a weirdly plausible real-life sequel to Collateral.

Whatever his private preferences may be behind doors that are closed, locked, and sealed off from all thetans, Cruise is by all accounts anything but a deadbeat dad. Sure he has long hours on film shoots and travels to basically every exotic location a human being possibly could, but he loves his daughter. TMZ reported on Cruise’s lawsuit, in which he apparently wrote, “I have in no way cut Suri out of my life — whether physically, emotionally, financially or otherwise.” Don’t fuck with daddy Maverick! “Even during the times when I was working overseas and was not able to see Suri in person, we were (and continue to be) extremely close.” Sure, he is not there to co-parent with Holmes every single day, but he does have a huge fortune that allows him to fly Suri to wherever the hell he is at any given time. He also does normal divorced dad stuff like taking Suri to Disney World on his days off and buying her all the princess dresses and mouse ear hats her little heart desires. Cruise says of Suri, “I am a constant presence in her life,” and he is offended at the mere suggestion that he wouldn’t be. “While I’m sure my daughter misses me when I am not with her (as I miss her), she is a very happy child and we have a wonderful relationship and cheerful phone calls.” Stars, they’re just like regular people who get married, have children, and then have to forge new paths in parenting after the romantic relationship and legal union collapse.

TMZ claimed that Cruise compared his job as an actor to soldiers stationed in Afghanistan during the deposition that went with his suit. He makes a lot of action movies and says the recent filming of sci-fi film Edge of Tomorrow was “brutal.” Cruise’s lawyer Bert Fields jumped into action to defend his client, saying the quotes were taken out of context and were responses to particularly leading questions. According to Fields, Cruise was asked if he felt filming in foreign countries was similar to being a serving soldier, and Cruise responded, “Oh come on. You know, we’re making a movie.” He also had to answer some point-blank questions about the role Scientology played in the demise of his marriage to Holmes. When asked whether Holmes wanted to separate Suri from the dubious religion, Cruise could not lie, saying, “Listen, I find that question offensive. I find it — those statements offensive. And like with any relationship, there are many different levels to it. You know, I — I find it very offensive. There is no need to protect my daughter from my religion.”

But the lawyer, pressing Cruise to admit Holmes was not a Xenu stan, asked, “Ms. Holmes has never indicated in any way that was one of the reasons she left you? … To protect Suri from Scientology?” To which Cruise finally copped, “Did she say that? That was one of the assertions, yes.” He also admitted that Holmes and Suri are no longer members of the church. Cruise was mostly disgusted that his parenting was being called into question at all, feeling that it crossed a line of privacy that should always be respected. Unfortunately for Cruise, it’s no longer the ’80s, and our modern surveillance culture will publish anything that leaks, even framing it in a way that is intentionally misleading. Cruise said, “I am a public person, I absolutely understand. For me there is — I tolerate a tremendous amount and I’m very privileged to be able to have the life that I have, and I believe that. But there is a line that — that I draw for myself — and that’s it.”

The deposition papers reveal that Cruise went as long as 100 days without physical contact with Suri, and you can tell that maybe his own guilt is what’s driving this lawsuit. He admits he can’t always be there in person, and that he tries to compensate with vivid storytelling over phones and video chat. Sure, it’s not the same as being there, but that hardly qualifies him as a deadbeat, and he’s clearly hurting over the mere idea that his own daughter thinks he’s not around enough. He has been especially vigorous about fighting the aging process in the last few years, piling up on action movies and other feats of strength. He’s probably afraid that if he ever slows down, his career could take a dive like the one it suffered circa Oprah Couchgate. But life is short, and you can’t do everything. What’s one more useless movie about race car drivers compared with watching your kid grow up? Maybe it’s time for Cruise to take a year off and chill. Or at least film a movie that takes place on Earth, in the present, in America — somewhere easier to fly Suri to?