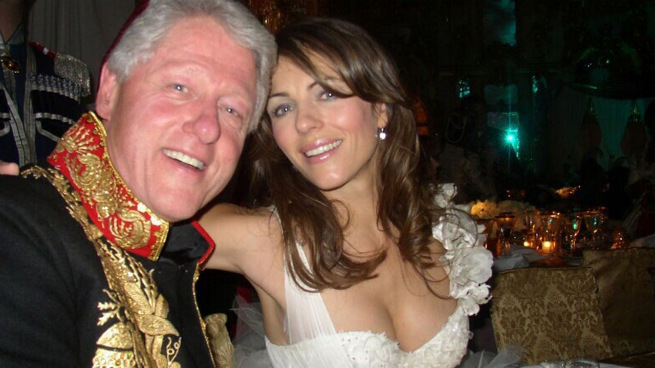 Bill Clinton & Elizabeth Hurley (Globe): Supposedly there are “bombshell tapes” that reveal Clinton’s yearlong affair with Hurley during his presidency. This story is coming out just in time to mess with Hillary Clinton’s plans to run for the presidency, but Tom Sizemore has already taken back his own words. Hurley took to Twitter to deny everything. The tape in question is actually an audio recording of Sizemore, who was already Hurley’s ex-boyfriend at the time, setting her up with Clinton after a Saving Private Ryan screening in 1998. According to sources, Clinton asked Sizemore for a personal introduction, and then flew Hurley in on a private plane. He gave her a tour of the White House that ended in the Lincoln bedroom. Sizemore described Clinton as having “more charisma than 1,000 Brad Pitts.” Pitt has never been that big on charisma, though, unlike Clinton, who allegedly told Sizemore, “You dumb motherfucker. I’m the Commander-in-Chief of the United States of America. The buck stops here. Give me the damn number.” Damn, good Scandal spec script, whoever wrote this! Clinton supposedly called off the affair when he started to catch feelings. Hilary slept in the next room. Clinton and Hurley have definitely met, but nobody knows for sure except the two of them whether they really had relations. Hurley did once say “Powerful folk can be sexy. I adore Clinton; you know, naughty but nice with a very sexy voice.” Did he make you horny, baby? Just typing that gave me douche chills.

Beyonce Is Too Skinny (In Touch): Friends are worried that Bey’s recent devotion to fitness and healthy eating is taking a toll on her curves, and that she’s gotten too obsessed with her weight ever since she gave birth. She just started another monthlong vegan diet, despite Grammy viewers wondering why she was looking so scrawny during the “Drunk in Love” performance during the opening of the show. “Can’t keep your eyes off my thinny” just doesn’t have the same ring to it.

Christina Aguilera: Yes, I’m Pregnant! (OK!): There are no quotes around “Yes I’m Pregnant” because OK! didn’t actually interview her, they just speculated based on some pix of her wearing a baggy sweater and touching her stomach.

Ellen & Portia’s $220 Million Divorce (Star): Pictures of Portia de Rossi walking a dog without her wedding ring are the basis for this story, which speculates that the supercouple is fighting, although not in public. “Ellen is ‘faking it’ for her fans.” You mean someone whose media persona is bubbly and friendly might not really be bubbly and friendly all the time in private? C’mon. “Portia tells friends she feels like a prisoner” in the huge house she and Ellen DeGeneres share. Ellen recently threw a big birthday party for Portia, but don’t be fooled! Everyone knows that if you’re spotted without your ring it means the marriage is OVER!

Selena Gomez Went to Rehab (Star): Gomez really did go to an Arizona rehab clinic for two weeks after canceling her remaining tour dates. According to Star, her reasons for rehab were alcohol, Molly, Ambien, Xanax, weed, and Justin Bieber. She checked into The Meadows rehab facility in Arizona under the pseudonym “Ashley Cane.” They also claim she flipped out because Bieber cheated on her with Miley Cyrus. As if Miley would ever touch the Bieb! Get better soon, Selena.

Jamie Foxx & Katie Holmes (Page Six): This rumor is so weird and keeps coming up that it might actually be true. Foxx and Holmes have been dating since last summer, but they’re keeping it quiet so as not to ignite the Tom Cruise volcano of sadness. Makes a good sequel to Collateral, though! Foxx and Holmes attended the Super Bowl separately, but were seen partying together. They have denied the rumors throughout, but Holmes is supposedly staying at Foxx’s mansion in California even as we speak. I kinda ship this!

Diddy & Cassie’s Engagement Was a Publicity Stunt (Diary of a Hollywood Street King): They are not actually engaged, even though Diddy popped the question over Instagram with a picture of a huge ring, and Cassie accepted, wearing the ring on the set of Puff’s new video. His former girlfriend Kim Porter, whom he has several kids with, was not OK with the rumor going around, and made Puffy admit online he’d been bluffing all along. Ugh, Cassie, you need a new boyfriend sooooo badly.

Which Pop Legend Rents a Gent? (Naughty But Nice Rob) An “aging pop legend” has been using the “Rent a Gent” service to find suitable male escorts to bring to her events. They have to be hot, cut, and in their twenties. Sounds like what dudes in the entertainment business have been doing since forever! Maybe she’s not looking for serious companionship. She just wants a boy toy.

Which Celebrity Teen Son Threw Up at the Grammys? (Naughty But Nice Rob) “The young teen has been spotted before with booze, but his hard partying following the awards shocked everyone, including his famous mom! She pretends to be a strict mom in public, however, when she is not in front of the cameras she lets her kids run wild.” I mean, I’d get wasted too if I had to sit through the Grammys in person.

Which Newlywed Is Already Cheating? (Downfront 2) “This newlywed got busted high profile when he tried to holla.” Every newlywed professional athlete, actor, and musician, probably?

Which Actress Turned Stay-at-Home Mom Is Bored? (Blind Gossip) “This girl was at the top of her game just a few years ago. However, she is hardly working at all now, and it’s creating major problems in her relationship with her celebrity husband. With her friends, she keeps privately comparing her acting career to Jennifer Lawrence, and is not at all happy that she is not measuring up.” Uh, if this is who I think it is, girl you will never be Jennifer Lawrence because she can act, and you can’t.

Do You Like Prince Movies? Podcast: Philip Seymour Hoffman and Woody Allen

'The Biggest Loser' Champ Rachel Frederickson and the Spectacle of Health