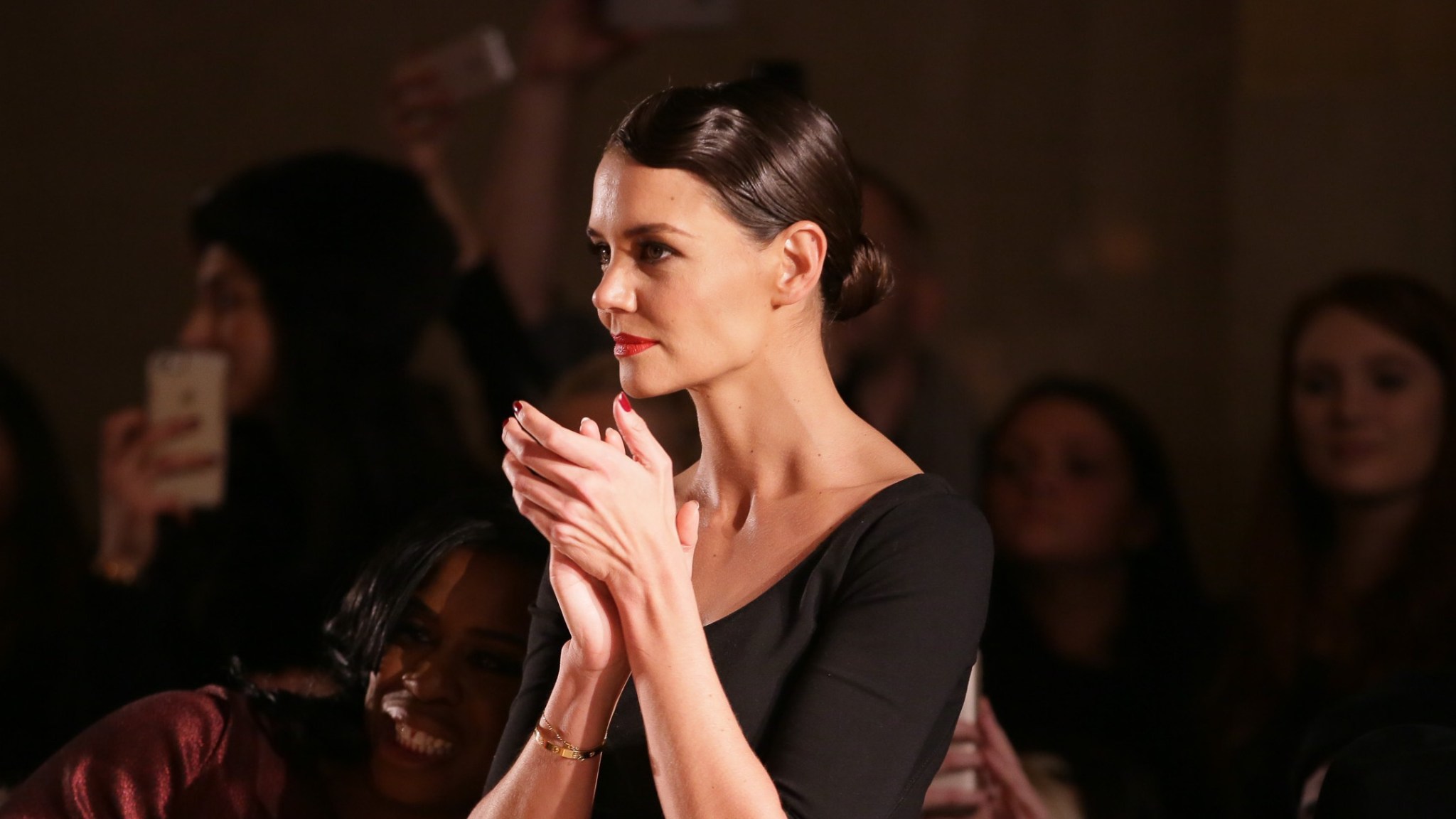 We’re getting a lot of Katie Holmes this week, though I’m not sure anyone has missed her much. The only Katie Holmes stories that matter are the ones that include Tom Cruise — a fact someone in her camp must have acknowledged, because the TomKat saga has been revived! TMZ reports that the parents of Suri refuse to speak to each other. The initial story cited Katie’s dissatisfaction with Tom’s level of parenting. Allegedly, he hasn’t seen his daughter in months while he has been filming Mission: Impossible 5 in London. Never a site to let a story die after just a single day, TMZ follows up today to answer the question we were all asking in our heads: No, Scientology has nothing to do with Tom and Katie’s mutual disdain. They merely have an “intense dislike for one another.” TMZ’s second story goes on to say that neither Katie nor Suri has been ostracized by the Church of Scientology, and Tom is just upset that Katie blindsided him with the divorce. So, in other words, these two are just like any divorced couple with lingering resentment. Stars: They’re just like us! 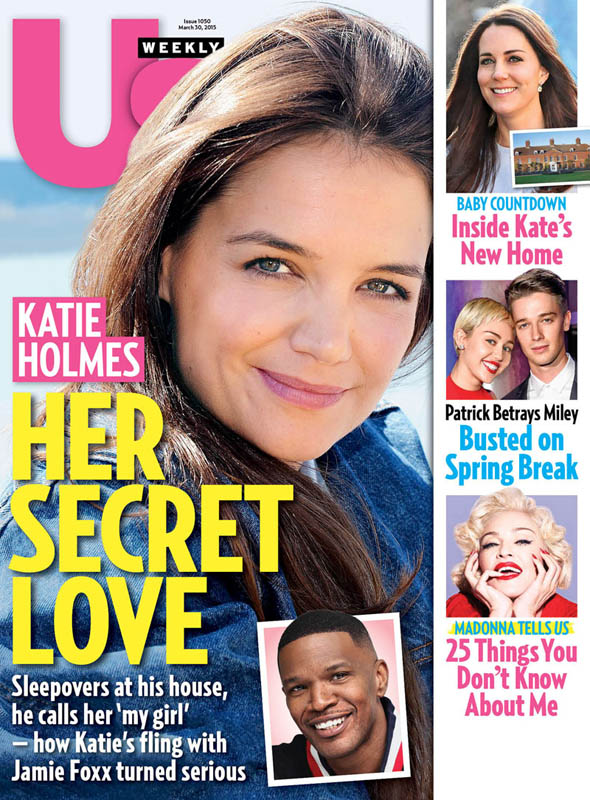 Well, except that Holmes seems to be complicit in another unlikely romance. Us Weekly, and, I’m assuming, Katie’s PR team, would like us to believe she is dating Jamie Foxx. In fact, TMZ even suggested that this supposed relationship has contributed to Tom’s anger. Here is a photo of the new FoxxyKat holding hands, a grainy image that suggests a secret intimacy spied upon. The photo was taken last month, which is only one fact of many that raises suspicion. And why wasn’t this published sooner? Perhaps Us is exacting some kind of narrative control. As a reminder of its involvement with this developing story, the tabloid also boasts, “Us Weekly broke news of their initial tryst in October 2013.” Most of the available information about these two comes from Us or People — two outlets known to work intimately with select publicity squads. People adds the following from “a source”: “This is not some intense romance. Jamie and Katie are friends and have been for a long time. … They’re not about to run off and make some serious commitment.” Us gets the story out there, while People casts enough doubt to undercut it without an outright denial. Everybody wins — especially Katie and the projects she’s promoting right now. How else would we know, or care at all, that she had a film at South by Southwest?

In case you still want more from her, here’s a video. She dances.

Kicking into Wednesday! Have a great day!

The second Divergent movie is here, and that means the Woodley-Elgort-Teller squad has reunited. Jennifer Lawrence, Liam Hemsworth, and Josh Hutcherson are still Hollywood’s YA-movie power trio, but I would be afraid were I any of them. Team WET combines blockbuster dollars with indie credibility far better, which makes it seem like it’s more likely to stick around for a while. Woodley is on the April cover of Elle, while Elgort covered Seventeen. He assures us that he “never once wanted her sexually, which is nice.” He also really likes dates at all times of the day: “A long walk in Central Park and then taking the subway downtown and going out to eat and ordering oysters. After that, you walk around again and talk. Morning dates are nice, too.”

Meanwhile, Woodley proves she does not have time for the Kardashian/Jenner clan. Sugarscape asked her to make a Kylie Jenner selfie face, which she could not do because she didn’t know who Kylie was. If you’re not about that bone-broth life, Shailene is not about you. She also spoke to Elle about her feelings on love, architecture, and the intersection of the two: “When you’re truly in love, for me, it’s … you’re my lighthouse! You’re somebody who holds me high, keeps me safe, you’ve got my f—kin’ back … You also love me whole, wild, and free. You let me do me, and I’m gonna let you do you! And I’ll be the home that you return to.” I am afraid that Shailene has read too many Nicholas Sparks books and now imagines her own love story set against the dreamy, coastal North Carolina landscape.

Failing Relationship of the Week: Amber Heard and Johnny Depp

Whispers are engulfing Depp and Heard’s new marriage. The Daily Mail reports that their honeymoon has been postponed because she is filming a movie in London. Presumably, she could have planned long-term for a honeymoon window that did not interfere with her work schedule had she tried harder. Dark Internet website Blind Gossip has an item that suggests she may be fleeing her husband more than displaying dedication to work. This item, which does not specifically name anyone involved, says the man in question has poor physical hygiene and, more tragically, has abandoned his sobriety. Let’s hope these are just untrue whispers.

Father of the Week: Jude Law

If you’re wondering why we haven’t heard much from Law lately, perhaps it’s because he’s busy in the throes of parenthood. He is now a father of five! In addition to his three kids with ex-wife Sadie Frost and one daughter with ex-girlfriend/model Samantha Burke, he has another daugther with ex-girlfriend/model Catherine Harding. I wonder what Christmas is like for Law. How many stops does he make? How many gifts does he get each of his children? The obvious move is for him to put on a Santa suit every year and play that part. That way he can drop in on the various households to see his disparate spawn, and there’s a built-in reason for why he has to go. You’re welcome, Jude Law.

Rising Stars of the Week: Iman Shumpert and Teyana Taylor

Empire concluded its first season last night. We’re all bereft, except for Shumpert and Taylor. Last week, Shumpert told a Cavs reporter that he believes Hakeem Lyon is based on him. While Shumpert was lamenting the similarities, shouldn’t he be pleased? Shump is an aspiring rapper, and that career could not have been helped by leaving New York. Sure, playing with LeBron will keep him relevant, but being associated with the most popular show on TV seems beneficial for him and Taylor. After all, maybe she can parlay this into a role in Season 2.