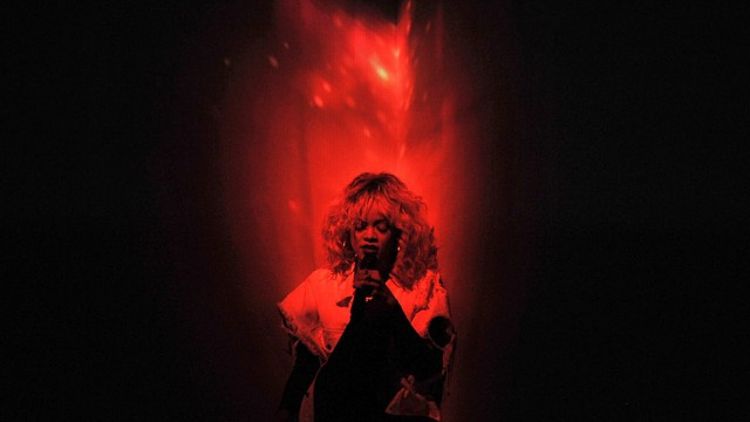 This week, the Dance/Club play chart, which we last tackled in January, is back with ten brand new hits.

Things only Rihanna can get away with:

Blush are a K-Pop inspired girl group organized by FarWest Entertainment to conquer the Asian and American markets simultaneously with English language pop songs. The five members of Blush hail from India, the Phillippines, South Korea, Japan, and China. So: an Asian Spice Girls who favor door-knockers with lace tights and sound like En Vogue. Whoops, I love this.
Grade: A

Swedish House Mafia’s VEVO channel is called SHMVEVO, which sounds like the name for a Yiddish YouTube clone. This is hella brostep with a soundtrack to Blade flavor. The video is patterned after Collateral and ICP. Super-silly, all around.
Grade: C+

A legitimately horrifying video with Nicki as a digital Frankenstein being stalked by bald automatons. I fear Nicki has turned full Victorian pastel goth on us. Why do divas always turn British after a certain point? Do they come off like Adele?
Grade: F

Christian trip-hop, alt-rock with a big ol’ inspirational chorus. If I’m going to be open and admit I like Lana Del Rey and Taylor Swift, I might as well own that I like this too. The video is so bootleg and budget, it’s endearing. How this slow boat song about Christ got on the dance/club charts I’ll never know.
Grade: B

Havana Brown is an Australian DJ who has been an opening act for Britney, Chris Brown, and Rihanna. This is her first musical effort and it is a sub-Jennifer Lopez slice of cheesy house with cameos from the cast of Jersey Shore. Middling.
Grade: C

KELLYYYYY CLARKSONNNNN is a national treasure and we are all forever in debt to her priceless advice.
Grade: B+

Ugh. Lady Gaga combined with Lita Ford and a soupçon of Pussycat Dolls and stir-fried in bleach. I’m not opposed to slutwave whatsoever, but this is just dumb and already feels dated beyond belief.
Grade: D

I reviewed this song last week when it made it to #7 on the Tropical Chart. Since then, the music video has been released — a high-camp, club life Rocky Horror Picture Show with an imperious tight black leather clad Gloria putting the S&M in Miami Sound Machine with swing dancers, LED lasers, and an all girl band. “Hotel Nacional” is one of a few songs on Gloria’s latest dance-oriented album “Miss Little Havana” not co-produced by Pharrell Williams, who helped conceive the album with Gloria and her husband, M.S.M. band leader Emilio Estefan. I give it here what I gave it there…
Grade: A-

Not to be confused with their major hit “Always” — or probably exactly to be confused with it. Erasure songs make me feel the way Sesame Street made me feel as a kid. Just sort of happy and loved and like good is going to triumph over evil after all no matter what. Happy Valentine’s Day y’all.
Grade: A