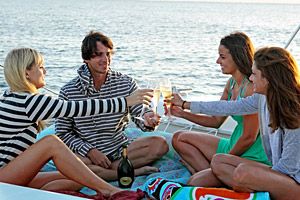 Last week, The Bachelor contestant Blakeley’s tragically heartfelt misadventure in romantic scrapbooking cost her a six-month lifetime of happiness with floppy-haired soul-mate craver Ben Flajnik, prompting me to potentially cost myself untold millions of dollars by sharing — free of charge! — a very important lesson from my soon-to-be established consulting firm for prospective ABC bachelorettes. (Don’t feel too bad for me: I’ve already submitted an expense report for “untold millions of dollars” to ESPN. Check’s already in the mail.) But my heart was broken anew Monday night as I watched obvious mistake after obvious mistake being made by the remaining contestants as they tried, and failed, to outflank pucker-faced tactical genius Courtney the Model. And so, at the risk of another potential seven-figure loss to my net worth, I’m sharing more tips from Bachelor School. Let’s call them Eight Simple Rules for Dating My Dumb-Ass Bachelor, gleaned from last night’s episode — and hope disposable TV love can be saved by my extreme financial sacrifice.

1. DO NOT EVER say things like, “This would be like the perfect date with my boyfriend … if he didn’t have five other girlfriends.”

I know that this process, especially as we draw closer to the end of your utterly misguided romantic journey, is an emotionally harrowing one. Bonds are formed, feelings intensified, genitals engorged. But think of Bachelor Ben for a moment. A few weeks ago, he had, like, 32 girlfriends. Now he has only five. He’s essentially the survivor of a harem genocide. If he overhears you reminding him about the decimation of his girlfriend stable, he’s going to be really bummed out.

It doesn’t even matter if you’re a “real” model. Courtney the Model is only sort of a model, right? Subconsciously, Ben (or any subsequent Bachelor — they are all vulnerable to the same line of attack) will always be reminding himself, “Hey, I’m having sex* with a model! Nice!” Of course, the dummy is so wrapped up in the moment that he doesn’t realize that now he’s a Recognizable Person From Television, he could spend a month in Los Angeles and have sex with so many models that his having-sex-with-models-part will probably snap off from overuse. It’s not too late for, say, a dental hygienist or an administrative assistant to suddenly remember their side careers as “part-time models” and get back in the game. Show him an iPhone photo of yourself and say Terry Richardson took it. He’s not an intellectually curious person; he’s going to believe you. Remember, he badly wants to have sex with a model.

[*They are definitely having sex.]

3. If you feel like your “spark” is dimming, have sex with him atop an ancient temple.

This should go without saying, but he’s always wanted to have sex — with a model, if he can get greedy for a minute — atop an ancient temple. What a great stroke of luck that they stumbled across one in a Belizean jungle! After you’ve had “a really tough week,” there is no better way to reconnect with your partner than letting the souls of a thousand sacrificed Mayan virgins course through you as you bone at the apex of a holy ziggurat. Those unspoiled Mayans died for a reason, and that reason is the reignition of your romantic flames. (And sex with a model atop an ancient temple.)

4. Never fill out the “Your Greatest Fears” line on the Bachelor application.

Heights, sharks, the dark, cleaver-swinging dwarves, nun-clowns, buffet sushi, whatever — the producers WILL engineer a date in which you’re made to face your phobias. And while it’s cute to think they’re setting you up in a situation where you’re adorably vulnerable and ready to be rescued by Big Strong Ben (or whoever), they are actually subtly destroying you in his eyes. “Ugh, so high maintenance,” he’s thinking as you quiver in soul-chilling fear over staring down the external manifestation of a buried childhood trauma. “Why can’t she just fucking jump off this helicopter/climb this 200-foot-high bridge/pet this shark? I’m bored. Where’s the model?” Meanwhile, the Model (see Rule 2) is befriending a tarantula named Terry. She has no fears, with the possible exception of a poorly DJ’d photo shoot for the JCPenney catalog’s budget kimono section. Get it together.

5. THAT BEING SAID, get attacked by a shark.

Just swimming near them isn’t doing you any favors. Chum your thighs, scream, “Have at me, Shark Week!” into your respirator, and let Ben assist the on-site predator wrangler in saving you. Your semimortal danger will temporarily distract him from thinking about what the model did to him atop that temple, which involved the very creative use of a BPA-free water bottle.

6. If you must retaliate against the model for her diabolical machinations, attack with numbers on your side.

Here’s the thing: You are going to fail. She’s already 10 moves ahead, having incepted Ben with the perfectly engineered idea that “I have no problem with the girls, they’re nice enough, even if they’re totally vanilla and boring non-models I’d never be friends with in any other context.” But if you confront Ben in a group, he’ll at least be momentarily forced to consider the possibility you have his best interests in mind while you try to totally fuck up his ability to continue having sex with a model.

Even if he does that thing where he makes them dance. That’s actually just a tic — he’s very self-conscious about them, and his trainer’s always flicking at his nipples in a profoundly cruel way to motivate him to bang out five more reps on the butterfly machine.

We’ve already covered this. Stay with us. It’s not complicated.