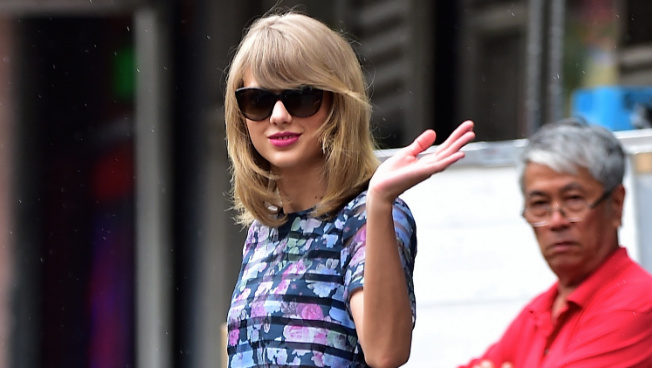 Taylor Swift’s Best Friends of the Week: Karlie Kloss, Lorde, and the Cast of The Giver

Taylor Swift is the biggest pop star in the world. She hasn’t had a new record out in nearly two years, and yet she’s constantly photographed. She doesn’t even do anything to get the Internet to care. All she does is prance around in overly stylized outfits with assorted conspicuous accessories, and this week’s chosen accessories were her sundry famous friends.

Over the weekend, the Daily Mail ran a story claiming that model Karlie Kloss had moved in to Taylor’s California abode — now not just best friends, but roommates, too! If true, it would be kind of weird, but not that surprising. Weird, because why does Taylor Swift want or need roommates? Most famous people are constantly surrounded by others. Having some quiet time at home must be a priority. But unsurprising, because these two have been spotted together many times lately. Gawker pointed out that this story has since mysteriously disappeared (though it’s been preserved over at Oh No They Didn’t!); Kloss’s representative later followed up to clarify that the two do not and are not planning to live together, and the false information is why the Mail pulled the story. Hm. The Mail, and the U.K. tabloids in general, are not exactly known for their veracity. Did they suddenly find a new dedication to the truth, or did Taylor and Karlie threaten to pull a Clooney? Let’s keep an eye on this one.

Taylor was probably too busy to even notice the report, because she has been taking cooking classes in Rhode Island with another best friend, Lorde. She posted an Instagram of two of them, thanking the chef. The sleuths at Just Jared determined that this must be a “latergram” because, more recently, Taylor has been in New York and Los Angeles fulfilling her publicity responsibilities for The Giver. Yes, in case you forgot, Taylor Swift has linked herself to your childhood memories. Based on this report, it sounds like she spent her time on set doing what she does best: befriending rising stars younger than she is. Seventeen-year-old Odeya Rush says that even though she had no scenes with Taylor, they still became best friends. Taylor won everyone over by singing on set. Of course she did.

Conscious Uncoupling Progress Report of the Week: Goop and the Glee Producer

The new issue of Us Weekly reports that Gwyneth Paltrow has recently started dating Glee producer Brad Falchuk. Apparently, they went on weekend getaway to Utah around July 25. However, this relationship was first hinted at by Blind Gossip in October of last year. The reason it was kept secret was because both Goop and Falchuk were married when it began. As previously discussed, this relationship is the only explanation for why Gwyneth is still willing to appear on Glee. It’s a truly terrible show with zero value left since the covers have dropped in quality.

New Reasons to Dislike the Kardashians of the Week: Kendall Jenner Dines and Dashes, Kylie Jenner Parties with the Biebz

Until now, recently legal Kendall Jenner seemed like an empty vessel manipulated by her evil mother, Kris. At last we’ve got some real controversy allowing us to judge her! On Monday, she was eating with Hailey Baldwin (daughter of Stephen) at Mercer Kitchen in New York where she allegedly dined and ditched. According to Page Six, Kendall walked out of the restaurant without paying the $60 bill. Her waitress, Blaine Morris (who, fun fact, starred on the MTV version of Skins), followed her outside to get her to settle up. Morris says Jenner threw a few crumpled bills at her without checking to see if it was enough. That the server was an actress turned waitress cast a maudlin pall over this whole episode. Apparently, Kendall and Hailey were pissed because the restaurant wouldn’t serve them alcohol. Kendall denies the whole episode, while Baldwin has a different version of events: “They thought everything was paid for. Kendall was polite and asked ‘Does this cover it?’ They didn’t run.”

UPDATE: Now Kendall is threatening to sue Blaine Morris. Her lawyer, Marty Singer, whose name may ring a bell because he also represented Bryan Singer (no relation) this summer, claims that Kendall was actually “extremely apologetic.”

The youngest of the sisters K, Kylie, celebrated a milestone on August 10: her 17th birthday! She can finally see an R-rated movie by herself, which she celebrated by holding a bottle of tequila. There’s no evidence she drank it, though. She celebrated with Kendall, Justin Bieber, the Game (is he always available? Is there any party in Los Angeles he won’t attend?), Tyga, and someone named Wackstar whom I had not previously heard of. Here’s a photo of the crew from Wackstar’s Instagram, with Bieber and the Game holding liquor.

Bieber, if you forgot, is 20, which may be legal drinking age in Canada, but not in the U.S. Just another reason he should return to his native country. While we’re on the subject …

For the second time, Justin Bieber has been sentenced to attend anger management classes. He struck a plea deal for his arrest in Miami a few months ago. He has to go to 12 hour-long classes and make a charitable donation of $50,000. This plea deal allows him to avoid a DUI charge and probation, which he would most likely violate.

When was the last time you thought about Kelly Cutrone? If the answer is “never,” you didn’t watch The Hills or The City or Kell on Earth, and you made a huge mistake. If the answer is “not recently,” then you, like me, temporarily forgot how wonderfully the godmother (as in the female godfather, in the Mafia sense) of fashion PR talks smack. Kelly’s short window of celebrity gave us wonderful sound bites like “If you have to cry, go outside” (truly valuable workplace advice) and “We’re not really mean, but we’ll say mean things to you.” She’s fighting for a place in the spotlight, and to do so, she’s taking aim at KimYe. Quoth Kell, “I think they have no influence in the fashion world whatsoever … I mean, most people who watch the Kardashians’ (reality show) can’t afford Givenchy.” Not only is she going after Kim and Kanye, but she’s also going after the million or so people who watch Keeping Up. I’m not sure why she had to drag Middle America into this fight, but if that’s the collateral damage of Kelly Cutrone demanding attention, we’ll have to live with it. They earth spins a little more comfortably when she is spitting fire like this.

She’s not the only familiar face from The Hills back in the “news” this week. Do you remember Jen Bunney? She was LC’s friend from Laguna Beach who also became friends with Heidi and ultimately aligned herself with the Montag-Pratt axis of evil. This is what Jen looked like in 2006 during Season 1 of The Hills. 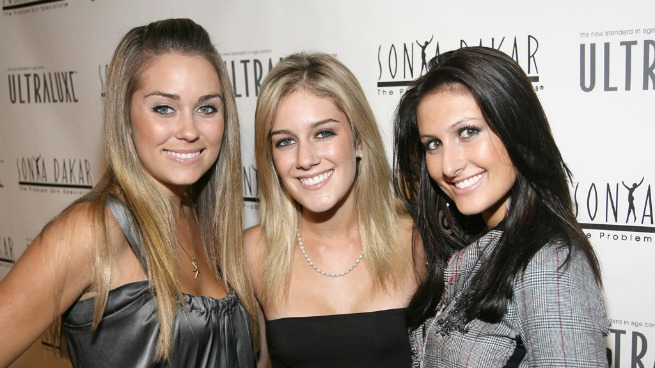 Jen got married a few days ago, and Heidi and Spencer were guests. This is what she (here with her husband) looks like now.

Potential Reconciliation of the Week: Chris Brown and Rihanna

Uh-oh. Is Chris Brown trying to get back together with Rihanna, the woman he famously beat up? He went back to sometime girlfriend Karrueche Tran immediately upon his release from prison back in June. She threw a party for him! However, Chris claims to have dumped her earlier this month because she was texting other guys and using him to promote her clothing line. A few days later, according to the Mirror, he was seen at the second night of Rihanna and Eminem’s Monster Tour. The U.K. tabloid goes on to say, “He’s been texting her loads since he got out of prison last month.” Only British people use “loads” like that, and I’m not sure I believe there’s a British person in Chris Brown’s inner circle. He just doesn’t seem like an Anglophile. “Nobody’s Business” is a great song, so I hope we get at least one jam from this terrible union — if it’s even true.

Broken Engagement of the Week: Ciara and Future

Ciara has broken off her engagement to Future. They have a 3-month-old son together. Us says she dumped him because he cheated her. Blind Gossip has more scoop: He cheated on her with Rihanna and Keyshia Cole while she was pregnant. Tough summer for Rihanna. She is now implicated in this breakup, as well as rumored to be the cause of the great elevator fight of 2014. I liked it better when she was partying with the Germans.