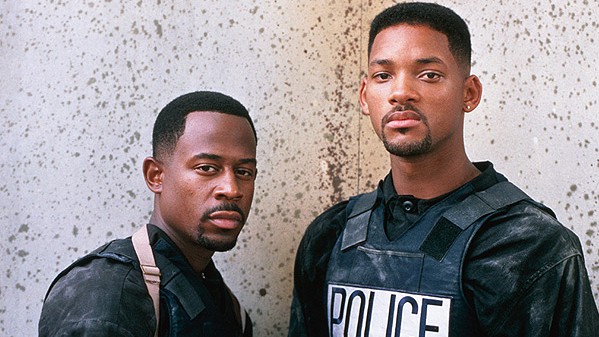 It’s been more than a decade since Bad Boys II (and, um, 19 years since Bad Boys), so Conan O’Brien felt it was time to ask Martin Lawrence if the threequel’s really going down. “I believe so, yes,” Lawrence said. “I just talked to Jerry [Bruckheimer] yesterday, and he said it’s real, they’re working on the script, they’re getting close, and it all looks good.” Head to 3:15 in the video below if you want to hear about the movie, but not about Martin Lawrence’s fitness routine.

In mid-July, Lawrence sent a message to his 12.5 million Facebook fans: “11 years ago today, Bad Boys II was released in theaters. Feelin’ it’s about time for number 3… what do you think Will Smith?” What does Will Smith think? He hasn’t been shy about Michael Bay’s influence on his career, telling Sean Fennessey in 2011 that the moment he flashed some chest in Bad Boys was (1) Bay’s idea and (2) huge for Smith:

“That was the moment for me where I learned how important single images are. That single image took me from a comedic television actor to a potential movie star. The scripts that I started to get offered changed dramatically. It was the first time that I heard women react to me with an audible gasp. There was a transformation from the cute guy next door who could make you laugh to a guy who might be able to handle himself in a bar fight and a bedroom.”

As of last December, Safe House screenwriter David Guggenheim has been working on the Bad Boys III script. While we’re playing “is he in or out,” though, what about Michael Bay? He’s leaving his directorial duties on the Transformers series and helming an elephant documentary, for starters. He also told USA Today, “There’s kind of a new chapter, a new direction in movies I want to make. I have a lot of stories to tell. And it’s about flexing new muscles.” So we’ll see. But it’s not like they can’t make Bad Boys III with whomever else in the director’s chair, if they’ve got Lawrence and Smith.