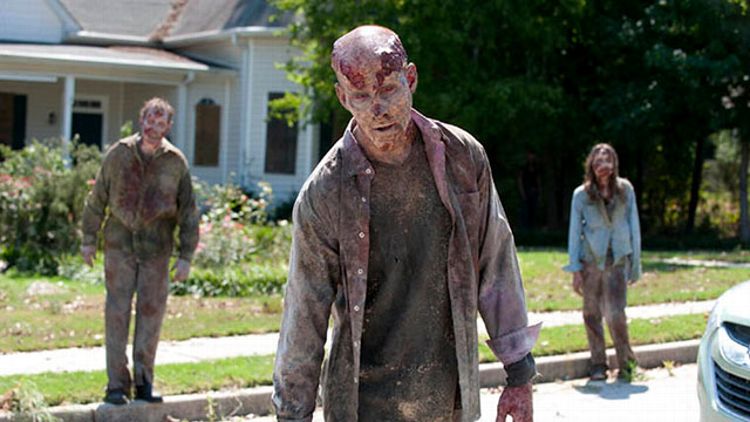 It has taken three seasons for The Walking Dead, the highest-rated drama on television, to get a spin-off, if you don’t count post-show chatfest Talking Dead. Why we have had to wait so long for such a sure thing is a mystery, but AMC is finally course correcting and has commenced development of a new zombie-based show to be helmed by Robert Kirkman, the creator of the TWD graphic novels, and the original show’s executive producers, Gale Anne Hurd and Dave Alpert. AMC president/GM Charlie Collier made the announcement today:

Building on the success of the most popular show on television for adults 18-49 is literally a no-brainer. We look forward to working with Robert, Gale and Dave again as we develop an entirely new story and cast of characters. It’s a big world and we can’t wait to give fans another unforgettable view of the zombie apocalypse.

As someone who hasn’t watched The Walking Dead in two seasons and hates zombies and thinks they are unwatchably boring, I feel I represent an elusive yet highly desirable demographic for AMC. Lucky for the cabler, that demographic will probably still be hungrily searching for a new favorite show by the time the as-yet-untitled spin-off arrives in 2015, so it’s probably in our best interest to help their development team make the best television they can so we can watch it and be happy, right? Here are some free ideas, because I care about art.

The Walking Dead: The New Class: With all the humans finally killed off or infected, zombie society is flying high — that is, until a race of ultra-intelligent cyborgs with unimaginably sophisticated weaponry and character development arrive on Earth and swiftly eliminate the walkers, then establish their government in the ruins of Houston and have a sexy political drama.

Planet Earth: Walking Dead Edition: An eight-part, lushly photographed documentary series that surveys the zombie-ravaged surface of the earth, featuring a Google-curated soundtrack of every club hit from the last five years that mentions the end of the world. Limited-edition 3-D Blu-ray comes with a cheap tab of acid and a bottle of sleeping pills.

Walking Talking Dead: With food supply and ammunition running low, a band of Walking Dead fans struggle to stage a recap show in the middle of a zombie apocalypse.

The Walking Dead: Origins: Set in a zombie-free Atlanta 10 years before the events of The Walking Dead, this is the story of Real Housewife of Atlanta NeNe Leakes’s rise to fame in the height of cable’s reality era.

The Walking Dead: Ice Worlds: A band of Canadian survivors find a research vessel docked in Nova Scotia and escape to the one place the zombies can’t reach them: the North Pole. They decide to set up a new society amid the beauty of the Arctic Circle and hang out with polar bears and stuff. (TV-PG, mild hockey violence)

The Walking Dead Becomes Her: AMC just airs Death Becomes Her eight weeks in a row with different sepia filters.

The Walking Dead: Abaddon Rising: This one is just a third season of Enlightened.