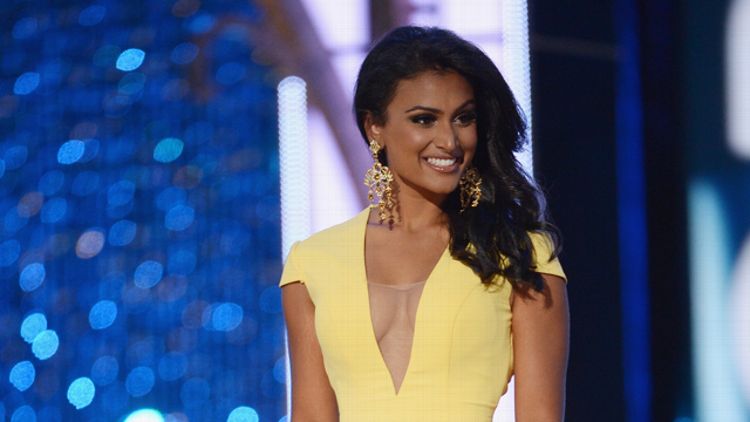 But maybe you need a break from what’s regularly scheduled. Maybe you crave a different drama, different competition, different kind of cutthroat. Maybe you crave competitive beauty — 90 or so seconds with a woman in little more than a bedazzled knee brace, makeup, and a sequined piano-keyboard sash performing a baton-twirling routine. To that end, last night ABC broadcast the 2014 Miss America Pageant, live from Atlantic City. It was up against a lot of the aforementioned shows, including a rain-delayed NBC Sunday Night Football game between Seattle and San Francisco. For a good stretch, the score was a grim, zipless, and awkward 5-0. The production of the Miss America pageant was two dismaying hours of 5-0.

The second hour kicked off with a talent competition, climaxed with the personal statement, and concluded with the coronation. Kelsey Griswold — Miss Oklahoma — sang “Everybody Says Don’t” from Stephen Sondheim’s Anyone Can Whistle. She’s a brunette, and she performed this number in a floor-length white skirt with black polka dots and a black lace top that sat above her navel. It said, “Shania said knock you out.” Griswold’s singing voice was flat. She kept punching the wrong words. Yet she seemed to understand that the song is about rebellion. She just lacked the conviction to sell the song. It must have all fallen out after a side bend she did in the middle of the number.

There was some confusion about who was next. It was the kind of act after which there’s nowhere to go but up. The contests didn’t know in which order they were to perform — and of the 12 women left, only 10 would be asked to entertain us. When cohost Lara Spencer called for Miss New York, no one moved. The mix-up turned Spencer, who at this point was just an increasingly aggravated voice, into an airport information center: “Miss New York. You are up … ” One woman stood up and headed to the stage, then turned around and came back, flailing her arms in distress. That was Miss Georgia, who, in a pre-performance voice-over, said that whenever she sang this number from Les Mis (“On My Own”), she thought about every man she’d ever broken up with. (Let’s hope she didn’t commit the kind of violence against them that she did to that song.)

Eventually, the real Miss New York, Nina Davuluri, arose in an Indian dancing dress and proceeded to do something straight out of Bollywood. It was competent, but a little like watching a robot program itself to whirl and vogue. The high point was her spinning on her knees, so that hem of her skirt stopped right at the floor. She became an upside-down teacup drifting across ice. The baton-twirling was done by Miss Florida, Myrrhanda Jones. She reportedly injured her knee in the prelims and wore her brace during the swimsuit portion of the evening. If the desire to win had left one of her fellow contestants feeling particularly Showgirls, Jones wasn’t saying.

What she did say, though, was unfortunate. Jones was one of the five women who made the finals, the reward for which was the personal-statement portion of the evening. Her question came from 2005’s winner, Deidre Downs Gunn, who was out for blood: “It’s the 50th anniversary of Martin Luther King’s ‘I Have a Dream’ speech,” Gunn said, “and we have an African American president. Yet minorities still have disproportionately low incomes and disproportionately high unemployment and incarceration rates. What should our nation do to address this issue?”

You know the dread of staying up all night for a week studying for an exam only to get the actual test and nothing you studied is on it? That was Myrrhanda Jones, who began her response with her unemployed father and then rambled until the other host, Chris Harrison, cut her off just before Jones got to say, “We need more jobs!” The comedian Mario Cantone then offered a question for Griswold about where she came down on the whole Miley Cyrus twerking thing. The start of her response? “I don’t think Miley’s performance was twerking for me. Get it? Get it?” That’s the exam Jones studied for! After Harrison cut her off, the crowd booed. But honestly, this pup needed to be put down. It was the humane thing to do.

Otherwise, there was nothing humane about this show. The title of Miss America might still retain a whiff of empowerment, but the production is a train wreck of insults. I watched the show with four girls under the age of 17. During the talent portion, the show popped fun facts on the screen, and my companions read each one aloud, perplexed. “Why do we need to know that she” — Miss Oklahoma — “rides a horse bareback?” While Miss Connecticut, Kaitlyn Tarpey, Riverdanced, one of her pop-ups declared that she “secretly wants to be in the FBI.” One of my couchmates growled: “So much for her secret.” They had no illusions about these women’s talents, but they didn’t know why the show seemed to be mocking them, either.

Meanwhile, it’s hard to take seriously something as unserious as the Miss American Pageant when one of your judges thinks a question about Miley Cyrus will get to a contestant’s inner beauty. Before a commercial break, Cantone told Spencer that the experience had left him considering “gay-to-straight conversion therapy,” which the state of New Jersey just outlawed. But if it keeps Cantone from coming back, by all means break the law.

In a sense, the show was everything one might expect a beauty pageant in 2013 to be — like a beauty pageant in 1951, just made of harder cheese. The permanent smiling, the changes of clothes, the hair, the attempts at humor: Miss America is a lot of work and stress and clenchedness for a $50,000 scholarship and the opportunity to spend the year as the spokeswoman for the cause dearest to you. Last year’s winner, Mallory Hagan, toured the country on behalf of sex-abuse victims. It’s unclear as a home viewer whether the winners enjoy their reigns. When Hagan appeared last night, she was dressed in matte black, which seemed to represent an ambivalence about succession. When asked if she was ready to help crown a new winner, her response was brilliant for its factuality and sad for its vagueness: “The time,” she said, “has come.”

I’ve been watching this show since I was a little boy. Sometimes it was by default. The broadcast had preempted The Golden Girls, Amen, and Empty Nest. But I stuck with it because it seemed kind of glamorous and also kind of sad. This was an era in which civilian competition shows were relatively special. Basically, there was only Star Search. So the idea of people being eliminated from a live competition was appalling and exhilarating. In 2013, it’s normal. This year’s contest came down to Davuluri, a 24-year-old aspiring medical student from the University of Michigan, and Crystal Lee, a 22-year-old Stanford grad, who danced ballet en pointe to “Swan Lake” and wants to get her MBA.

Before Davuluri was crowned the winner while, incongruously, a Jason Derulo song played, she remarked that it was amazing that this competition had come down to something historic: two Asian American finalists. And she was right, even if they were as interchangeably hot and fit as the women they beat. As they stood together in the final moments, standing face-to-face, locked in an embrace, speaking privately and urgently to each other, it was an almost touching sight. Almost. They were at the end of a beauty pageant, yes. But they also resembled two women consoling each other over the abject mediocrity they endured to get there.