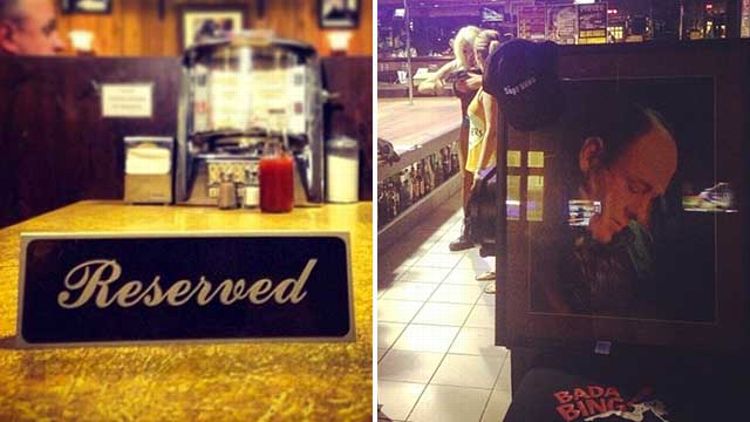 Condolences, remembrances, and tributes are pouring in for the great James Gandolfini, including from our own Andy Greenwald. And along with kind words from his Sopranos costars and movie star friends, there have been a few unexpected commemorations. Here are some of them.

From Journey’s official website: “It’s truly an honor to have been able to share one of the greatest moments ever in TV history with James Gandolfini. He was an amazing actor – taken way too young – and he’ll be missed. Our condolences go out to his family.”

From Sesame Street, which reposted this clip of Gandolfini’s appearance on the show on YouTube:

I’m saddened by James Gandolfini’s passing. He was a great talent & I owe him. Quite simply, without Tony Soprano there is no Walter White.

… and Sons of Anarchy’s Kurt Sutter:

tony. we will not “fuhgeddaboudim”.

From Best Coast, along with a bunch of other musicians:

Seriously going to cry. RIP James Gandolfini. You will live on forever in my DVD player and heart.

From, of all people, John Travolta, who was apparently good friends with Gandolfini:

Speaking with Good Morning America, Travolta said that “My father sold tires to his father,” and that “I was his inspiration to get into the business. He would see pictures of me on the wall from movies and he decided that he wanted to be an actor.” After the death of Travolta’s son, “James went out of his way to come to Florida and he would not leave Florida until I was OK, or he felt that I would be fine. After a week I said, ‘Jim you can really, you can, you know, we’ll be fine. I’ve got a lot of support here.’ But the idea that in our profession someone would go out of their way and not want to leave you until he felt you were OK, that’s the kind of soul that James Gandolfini was.” And so now: “My goal is to make sure that his family is OK. His little boy, I watched him grow up, and his brand-new little girl. We’ll just make sure they’re taken care of. That’s the whole idea.”

Someone dug up a New York Times article from 1988 about young New York City transients, and it features a familiar name:

Then there is Jim Gandolfini, who seems to thrive on the apartment-hopping life. Since moving to New York City four years ago, Mr. Gandolfini, 26 years old, has never had his name on a lease, never paid more than $400 a month in rent and never lived in one place more than 10 months. His wanderer’s existence has given him sojourns, some as brief as two months, in Hoboken, N.J.; Astoria, Queens; Clinton and the Upper West Side of Manhattan, and Park Slope and Flatbush in Brooklyn.

“Moving, to me, is no big deal,” said Mr. Gandolfini, whose calling is the theater but whose living comes mostly from bartending and construction. “I have a system down. I throw everything in plastic garbage bags and can be situated in my new place in minutes. Without my name on a lease, I’m in and out. I have no responsibilities.”

And, finally, from Slate, which shared a lovely anecdote about the man that will only make you miss him more:

Later in the evening, Gandolfini was called to the dais. Like many of the winners and presenters that night, he took a moment to graciously thank the critics. I’m very much paraphrasing here, but he said something to the effect of: “It’s an honor to be here tonight, to get to meet the film critics, who do us the service of watching and thinking about the work we do. We don’t always agree with what you write, but we do appreciate how much you care about the movies, and it’s a pleasure to get to spend time with you, especially the folks from Slate, my favorite online magazine.” An exuberant whoop went up from table 27. We’d just been shouted out by James Gandolfini, and only we … knew he was totally kidding.

Afternoon Links: Stephen Colbert Says Good-bye to His Mother, Makes Us Emotional All Over Again