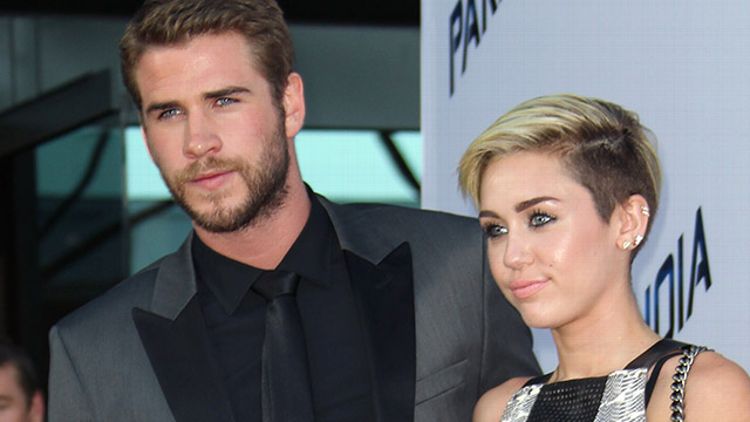 Miley’s Pregnancy Trap and Liam’s Wandering Eye: According to this story, Miley Cyrus and Liam Hemsworth waited to break up because she underwent a pregnancy scare over the summer. “Miley thought she was expecting and wanted to announce it to the world, even before she went to a doctor to verify the results. Liam begged her not to go public yet. He was emotionally out of the romance for months by that point, though he was still sleeping with her. She agreed to stay quiet for Liam’s sake. But Miley’s silence came with a price: She essentially trapped Liam in the relationship, telling him that if he left her alone, she’d tell the world that he had abandoned her at such a delicate time. She begged him to stay and said that he could have his space, as long as he didn’t break up with her.” A million sad faces. “So Liam obliged. He got his freedom and she got the right to say they were still engaged.” Poor Miley!

“Miley was very vulnerable and clingy.” Her “one dealbreaker” was that “Liam was not allowed to be seen in public actually touching or flirting with a girl.” As if that would stop him from doing it behind closed doors. “Liam has an eye for the ladies.” A source he hit on at a party said, “He tried to make out with me. I was like, ‘OK.’ After that, I saw him, like, all night long. It looked like he was trying to hook up with 10 other girls so it wasn’t anything special.” At the same time, though? Liam also got cold feet because the idea of being “forced into adulthood” was “completely and totally terrifying.” As it is for everyone! When Miley saw the now infamous pix of Liam making out with Eiza Gonzalez, “[Cyrus] broke up with him via text and un-followed him on Twitter in about two seconds flat. The end. And then she went into Liam’s closet in her house, where she still had a few of his clothes. She gathered everything up and threw it in the pool. So I guess you could say Liam’s eye wandered and that it was up to Miley to break up with him. He wasn’t going to do it, so it was up to her.” How cool! So passive-aggressive!

Misc/Etc: “She was an ancient 25” “a long, excruciating drip, drip, drip of rumors” “the endless parade of tarty selfies” “I don’t give a shit if she comes out naked. Just be better. Do better.” “I see a meltdown waiting to happen.” “I do tell her that I go to nightclubs. I do tell her that Mommy will be here in this city at that club.” “I want the lines of my clothes to make a journey around my curves.” “A pair of Frank Sinatra’s tap shoes” “We all know how much pot you smoke!” “Mommy, can doggies wear Manolos?” “I truly feel like when you treat your husband like the king, you, in return, will be his queen” “a blindingly white dress” “It seems particularly crass in a time when so many people are hurting.” “their own little love bubble” “She’s not my girl”

What Did Madonna Receive for Her Birthday? “I got a bong in the shape of a penis,” she told inquisitive minds on her Reddit AMA.

Katy Perry on Rihanna: “She always looks so fresh and I’m like, ‘How do you do that? We all know you don’t sleep because you’re on Instagram at 4 o’clock in the morning.'” SHE’S A VAMPIRE, DUH.

Lady Gaga Thinks Flip-Flops Kill Romance: “I feel that flip-flops are the downfall of many relationships. It’s like, first it’s the flip-flops and then it’s the sweatpants, and then it’s the ‘I don’t brush my hair.’ It’s the gateway drug to no sex.” I must have grown up in California, because flip-flops don’t bother me at all. Also, this is dangerously retro logic, Gaga. You really think it’s all downhill once he’s seen you without the bubble dress and clown makeup on? That’s when you’re the prettiest.

Gwyneth Paltrow’s Diva Milk: When Paltrow was on Chelsea Lately this month, “she demanded she have unpasteurized milk backstage. It’s nearly impossible to find, so they had to search all over L.A. to locate some. She left the milk untouched. Everyone rolled their eyes.” She just wanted to look at it! And no brown M&Ms!

Ben Affleck: “I went around my whole life thinking I was more or less as smart as women … I couldn’t have been more wrong. Like, my son, he just runs into walls. My daughters, they, like, build things like MacGyver.” Hey, some girls run into walls, too!

Misc/Etc: “Have you tried making out with the grills on?” “bunks in a cabin without TV or internet” “THESE NERDS KNOW THEIR WORTH” “#suckitin” “my essentials are chocolate and water, but what more do women need?” “It’s a little embarrassing!” “My wife says the only handy thing about me is I’m close by.” “Mom, just leave. And don’t cry, don’t cry.” “#tryingnottowrinkledress” “Jon Hamm took selfies inside” “Ben Affleck discusses politics with Larry David before downing a Fat Sal’s sandwich” “I refused to wear a prosthetic vagina!” “Russell Simmons and Shannon Elizabeth walk out of the men’s room together at the Soho House” “I talked on the phone and did butt lifts!” “Zooey Deschanel, Connie Britton, Lena Dunham, and Carrie Underwood all start texting furiously” “He’s the oiled-up dude at the club who only targets beauties” “Isn’t she a little old for a goth phase?”

Big Ang Thinks Marriage Is Overhyped: “I have a husband, but I’d have to say that marriage is overrated. They have to love you more than you love them, or it’s not worth it!”

Tim McGraw & Faith Hill Split: “They are country music’s equivalent of the royal couple, but Tim McGraw and Faith Hill’s marriage is on the verge of crumbling!” Is one of them friends with Big Ang or something? “After putting on a united front amid whispers of infidelity and divorce, the pair’s problems seemed to have finally surfaced as Tim has stopped wearing his wedding ring.” Friends were “shocked” to see McGraw “without his once beloved gold wedding band.” Say it ain’t so! “Tim never takes off his ring. While he is very quiet about the status of his marriage, he and Faith have been fighting a lot recently — and he’s tired of it all. He was making a big statement by performing without his ring at such a huge festival.” Was “HEY LADIES!” the big statement? “Although the two publicly insist they’re fine (both have denied rumors that Tim had an affair with 23-year-old country cutie Taylor Swift), insiders say he has emotionally checked out of the marriage.” Oh man, what if he really had an affair with Swift? That would be so un-Taylor of Swift, though. Although McGraw and Hill are coming up on their 17th wedding anniversary, they probably won’t make it to 20. “Tim refuses to acknowledge the momentous occasion. Faith has been trying to make things work. She wanted to do something special for their anniversary, but he said no. Pals say the hunky singer, who once revealed that his secret to a long and happy marriage is to ‘just shut up,’ finally had enough of being compliant. He is done with Faith’s controlling ways. He’s made it clear that he doesn’t know if he will ever put his ring back on.” Bring on the rain!

Tina Fey on the Potential of a 30 Rock Reunion: “It will be an IMAX movie and will be one minute long at the American Museum of Natural History.” I’m in!

Justin Theroux’s Friends Bet He’ll Never Wed Jennifer Aniston: “It’s a joke among Justin’s friends.” And they have “about $100,000” riding on it. “His friends are adamant he won’t ever marry. Justin finds weddings embarrassing. He can’t stand the idea of being on display, not to mention the pressure that comes with marrying Jennifer Aniston.” Shoulda thought things through more, Theroux.

Kris Jenner Cheating on Bruce Jenner? “It is a well-known fact that when Kris heads to Mexico, she is cheating on Bruce.” She went on a partying binge, hanging at Joe Francis’s Mexico mansion. “The truth is that Kris was off in Mexico partying away from Bruce. Someone who is married with children at home shouldn’t be jetting off to hang out with someone like Joe Francis and his friends.” WHY NOT?

Misc/Etc: “THIS MOM NEEDS A MILKSHAKE!” “partying on a yacht with scores of beautiful women” “known in her home country as ‘The Michael Jackson of Mexico'” “No, I’m a big marshmallow!” “fat grafting, cheek implants, and even neck liposuction” “his drinking has his handlers worried” “the actor was spied puffing on Willie Nelson’s favorite herb” “So Hollywood!” “ignored the party’s sushi spread to order a pizza” “I eat like a beast!” “DARK DISNEY” “watch their daughter’s S&M movie” “I’m going to sleep with it!” “she hates it because he gets so much food stuck in it” “complained about how orange she looked” “She looked annoyed to even be there” “Vanessa Hudgens makes grunge look good!” “Selfie!” “maintain their intense chemistry by engaging in role play” “he couldn’t imagine himself married because he bores so easily” “WHO’S IN HIS HAREM?”

Paris Hilton Offered Melissa Joan Hart Cocaine: Joan Hart’s new memoir, Melissa Explains It All, dishes the dirt on her short-lived wild years. The “straight-laced, if quirky” actress “wasn’t the angel everyone believed her to be.” At least not around 1999. “I was caught up with a toxic group.” In the late ’90s she “frequently experimented with drugs like Ecstasy and mushrooms. But when reality star Paris Hilton offered her cocaine, she realized her partying had taken a dangerous turn.” Melissa recalls: “Paris wanted a cigarette. When I realized what she was doing with it — using the recessed filter of a Parliament Light as a coke spoon — she offered me some. I turned her down.” Wait, people actually do that with Parliaments? Wow!

Adam Levine vs. Lady Gaga: Levine tweeted, “Recycling old art for a younger generation doesn’t make you an artist. It makes you an art teacher.” Gaga clapped back with her own tweet, “Uh oh guys, the art police is here.” Art teachers rule!

Sarah Silverman’s Budget Emmys Dress: “I got it online for 60 bucks, but it looks just as good as anything fancier.”

Sofia Vergara: “Miley Cyrus, this is where the twerk was invented: Colombia!”

Misc/Etc: “I’m obsessed with the ocean” “I’m just glad I didn’t go into labor!” “The only thing he’s addicted to now is working out” “one cheek was hanging out” “school is the tool to brainwash the youth” “wears a watermelon bra” “space-themed photo shoot for Vogue” “really jumping through hoops for this man” “Oh my God, I peed in my pants!” “I’m kind of voluptuous” “A serious lack of carbohydrates” “looks like she used drapes to hand-make her dress” “TINA’S NIP SLIP” “starfish-topped pumpkin pound cake with Butterfinger filling” “she feels trapped and lonely” “He will never change” “She wanted to spend the rest of her life with this guy and he dumped her” “the problem wasn’t strictly biological” “TAXIDERMY FOOTWEAR”