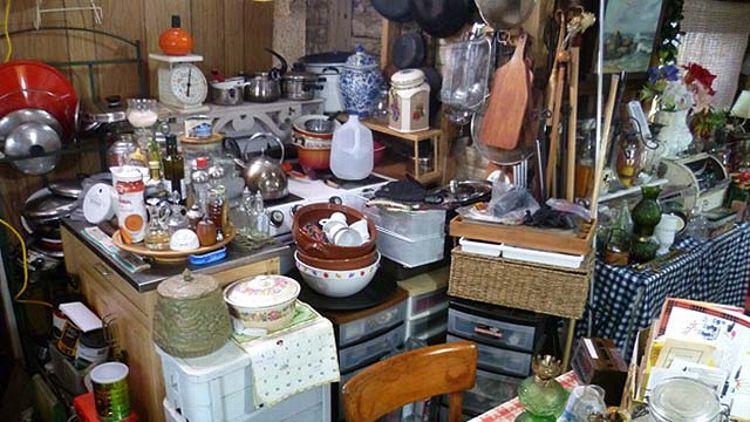 A&E announced yesterday that the documentary series Hoarders, which debuted in 2009 as the most-watched series premiere in the network’s history among 18-to-49-year-olds, had been canceled after six seasons. The news came four months after the same channel let the ax fall on Intervention, a series that was sort of Hoarders’ better-looking and more functional twin. While Intervention raged hard for 13 seasons, won an Emmy, and boasted an “astonishingly high” success rate for rehabilitating its subjects, Hoarders competed against similar shows in its cramped oeuvre (TLC’s Hoarding: Buried Alive, Animal Planet’s Confessions: Animal Hoarding) and wore down the spirits of even its most devoted fans.

Over the course of four seasons and dozens of garages filled with dead cats, I did my Hoarders duty as a citizen who needed more impetus to do her dishes right after dinner and pull out the Swiffer WetJet. But just before the Season 5 premiere, I realized I didn’t have it in me anymore. It wasn’t only that the Hoarders formula didn’t seem to be empirically effective — a Season 1 update was notably bleak — but that the process involved in cleaning out the filthy homes of the hoarders was just so depressing. The show often featured people whose mental illness clearly extended far beyond the hoarding itself, and sometimes the organizers were too pushy or didn’t bother to conceal their distaste for the wretched state of the fridge or the bathroom. Our own Tara Ariano has been a martyr for the cause of documenting some of the most extreme moments of the show, and oh, the things she’s seen in fridges and bathrooms. Hoo boy, it’s been an era. And now that era is over.

While increasing awareness of how complicated and devastating hoarding can be was probably a good thing, tuning in for too long could make the viewer feel hardened and cynical. The Hoarders audience went to war once a week for six seasons, and it deadened us and turned us into the kind of guy who laughs at a funeral. We laid eyes on plenty of human fecal matter in places where human fecal matter should not be, saw people value rocks over family, and watched as men and women argued over the sentimental importance of expired cartons of cereal and expired cartons of house pets. We watched sick people cry as trucks hauled away their belongings and observed heartbreaking biographies spelled out in giant mounds of receipts. The most dismal part was recognizing that Hoarders wasn’t helping anyone, at least not after we’d come to acknowledge hoarding as a hidden design on the tapestry of humanity and thrust it into the DSM as its own distinct diagnosis earlier this year. That new visibility can’t be written off, but eventually it seemed sick to keep checking in with the show’s weekly horrors, and though the ratings never exactly tanked, A&E’s cancellation of its two dark documentary series may be a move made in anticipation of an impending cultural fatigue.

The more lighthearted (and gloriously beard-rich) Duck Dynasty, which premiered in 2012, outperformed Intervention and Hoarders by a mile; sure, we pitied the nutria rats whose tails were sacrificed for $5 apiece, but at least the Robertson family seems to have their shit together in their own way. Many of the folks on Hoarders had developed strained relationships with their families or were isolated by their own anxiety and depression, replacing those bonds with newspapers and shoes; by contrast, the crux of Duck Dynasty is that the family is such a tight, yet goofy, unit. The Robertsons have some measure of control over their image and their salaries, having negotiated their group earnings up to $200,000 per episode for the fourth season, because the show would just be an inaudible duck whistle in the wind without them to star in it. The hoarders of Hoarders had no such authority, and when rehabilitation failed, they were left with little to gain from the experience. Rapid, forced cleanups may have saved homes from being condemned, but they were arguably too traumatic for the participants even when served with a dessert course of therapeutic aftercare. Hoarders was a cautionary tale, one that may have spurred its audience to recognize warning signs in themselves and seek professional help, but in hindsight, its subjects were the casualties.

Did Terry kill Hoarders? I won’t elaborate here, but if your stomach is strong, you’re welcome to see why I might think so by further exploring her fridge. Or was it Millie — did she beat Hoarders to death with the rock whose company she preferred to her daughter’s? Each sad episode was like a rubber band in a giant ball taking up precious space in the closet of the DVR: At first it was an oddity to play with, then it was large and thought-provokingly linty, and finally it was so big and tangled and unwieldy we just wanted someone to haul its ass away. For six seasons we turned inward and thought about ourselves, as we like to do, and how our obsessions and quirks and uncleanliness ranked against people whose situations were likely to be worse. Of course it’s now more appealing to wrangle in the mud with Mama June and Honey Boo Boo or to watch the Duck Dynasty clan clear rotten meat out of its freezer without crying or listening to a trained organizer walk them through it — we can gawk and laugh, we’ve been given implicit permission. It’s time for a tonal shift, and though I still mourn Intervention, last call had arrived. Hoarders beat us down, built us up, and made us almost barf on many occasions. Now here we are, in some ways better and in some ways worse for wear. Morbid Monday on A&E has been laid to rest, and may it rest in peace.